Union, widow argue Salvatore DeSarno, who was convicted of killing an officer in 1980, should not be eligible for parole. 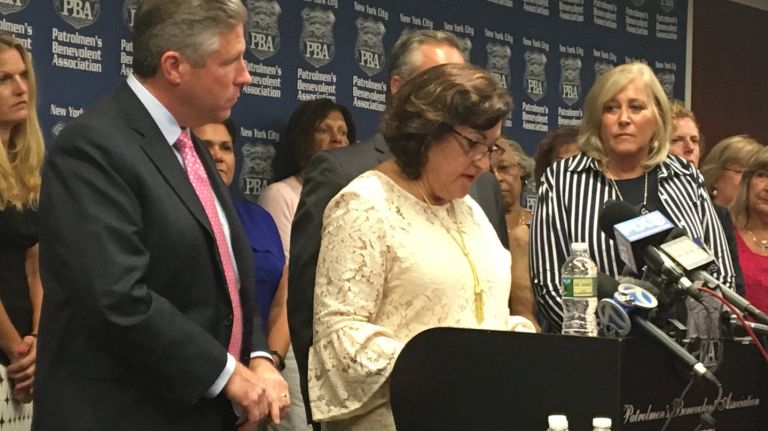 Linda Sledge fights back tears as she says Salvatore DeSarno, who was convicted of killing her husband, should not be eligible for parole. Photo Credit: Ivan Pereira

Flanked by dozens who lost loved ones in the line of duty, the NYPD Patrolmen’s Benevolent Association called on the state to revise parole guidelines so those convicted of killing officers are no longer eligible to leave prison.

PBA president Pat Lynch said Tuesday that the current framework used by the parole board does not put as much weight on what crime an applicant committed, which the PBA argues will provide those convicted of killing on-duty officers a better shot at making parole.

Lynch said prisons currently house 59 convicted cop killers who were sentenced when life without parole and the death penalty were not options for judges, which means they may one day be eligible for parole.

Lynch highlighted the case of Salvatore DeSarno, who was convicted of killing Officer Cecil Sledge in 1980, and will be up for parole next month. The union leader said it was appalling that DeSarno could be released into the public.

“The parole guidelines must be codified to prevent this from happening,” he said.

Sledge’s widow, Linda Sledge, held back tears as she pleaded for the parole board not to release DeSarno, who was convicted of shooting Sledge during a traffic stop and driving off while dragging Sledge’s body. She said that DeSarno was on parole when he was pulled over on Jan. 28, 1980.

“It is difficult for me to even imagine how any right thinking person could consider for a second letting Sal DeSarno back onto our streets,” Linda Sledge said.

A spokesman for the state Department of Corrections said the parole board considers several factors before making their decisions, including the severity of the crime and statements from victims’ families.

The union claims the department needs Gov. Andrew Cuomo to authorize changes to its policies.

“Where is your humanity?” Lynch said, while noting Cuomo has not taken steps to change the parole process.

Tyrone Stevens, a spokesman for the governor’s office, said a convicted person’s prison term cannot be changed after they are sentenced.

“The governor and the legislature were responsible for reforms in 2011 that strengthened New York’s parole system, and further, the governor proposed determinate sentencing two years ago but that effort was rejected by the legislature,” he said in a statement.

Besides pushing for a new parole board framework, Lynch said the PBA plans to legally challenge the parole board’s decision to grant parole in April to Herman Bell, who served 40 years in prison for killing two officers in Harlem.