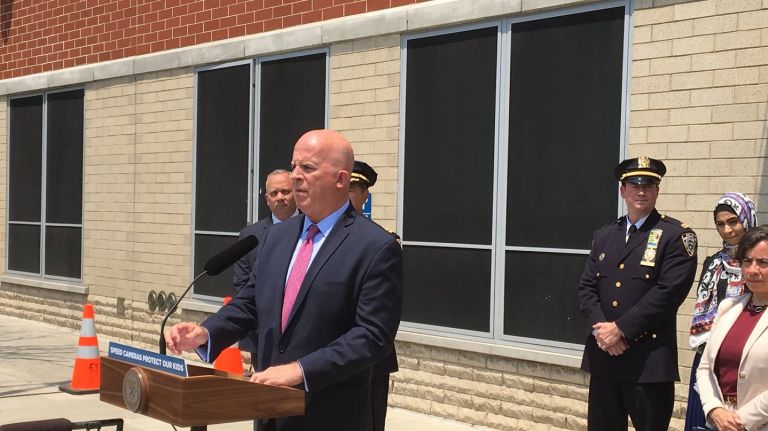 With the state legislative session slated to end Wednesday, NYPD Commissioner James O’Neill urged Albany to fast-track a measure that would allow the city to expand its portfolio of speed cameras.

Speaking outside P.S. 264 Monday, O’Neill said the bill would benefit children — such as students who cross heavy traffic on Fourth Avenue that is urgently not surveilled by speed cameras — to reach the Bay Ridge school.

He said cameras posted near schools and other aspects of Mayor Bill de Blasio’s Vision Zero initiative have helped decrease pedestrian fatalities by 45 percent between 2013 and 2017.

That figure only stands to fall, if the state gives the city permission to expand the number of cameras posted near schools from 140 to 290 over the next three years, O’Neill said.

“What we have here is a common sense request to our leaders in Albany,” O’Neill said.

The Assembly passed a similar measure last year. But the legislation has a less certain future in the state Senate, according to de Blasio’s office.

The widely-supported legislation has not come to the state Senate floor for a vote — and the chamber has also not voted on a second, related measure sponsored by state Sen. Simcha Felder, which would permit more cameras and armed police officers on the property of city schools.

A spokeswoman for Felder, who has historically been critical of cameras because of privacy concerns, declined to say where Felder stood on the bill most of his colleagues backed.

Patrick Lynch, president of the NYPD’s Patrolmen’s Benevolent Association, released a statement saying adding red light and speed cameras would not be sufficient.

“If the politicians promoting this money-grab were truly interested in street safety, they would put the proper resources behind the NYPD’s traffic enforcement efforts, including reversing the 5,000-plus reduction in the NYPD’s uniformed head count since the early 2000s,” the statement said.

When asked how many of the 5,000 workers were assigned to traffic enforcement work, PBA spokesman Al O’Leary was not immediately able to provide further detail.

“There are cameras all over the city,” O’Neill said.