The department has distributed about 20,000 cameras to officers, sergeants and lieutenants in every precinct. 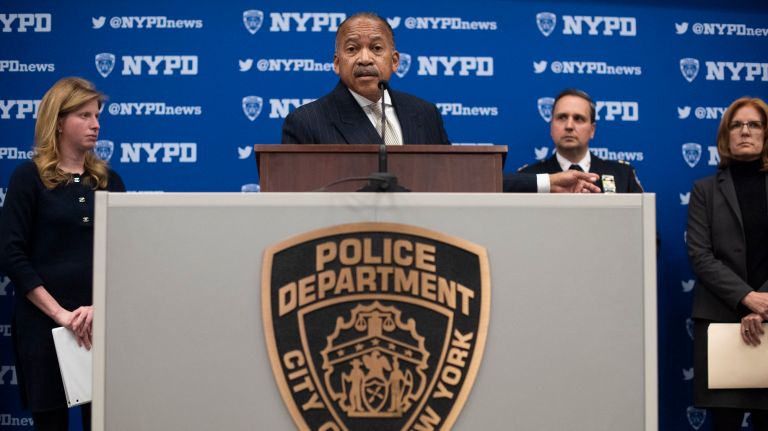 NYPD officials said on Wednesday that all uniformed patrol officers have been equipped with body cameras, and that they plan to roll out even more.

The announcement comes just weeks after a court ruled that the NYPD can release body camera footage in certain cases.

The department has distributed about 20,000 cameras to police officers, sergeants and lieutenants in every precinct, Transit District and Police Service Area, according to the department. The NYPD will next roll out about 4,000 cameras to officers in specialized units such as the Emergency Services Unit, Strategic Response Group and Critical Response Command by August.

The department has distributed about 20,000 cameras to police officers, sergeants and lieutenants in every precinct. Photo Credit: Charles Eckert

So far, the cameras have recorded about 3.5 million videos since the pilot program launched in pril 2017. NYPD body cameras now record about 86,000 videos per week.

The body cameras are intended to be activated any time an officer is involved in an investigation or enforcement action, according to officials. The camera footage has been used to both support an officer's account of what happened, as well as support a civilian's account, according to the department.

"Any enforcement action,  those cameras should be on," said First Deputy Commissioner Benjamin Tucker. "And we have been going to great lengths to try and make sure that the officers understand they have to turn the cameras on early enough in that process."

Tucker added that the department is now reviewing "critical" incidents, like police-involved shootings, following the February appellate court ruling allowing the NYPD to release footage. He said the NYPD would make a decision about what footage to release "on a case-by-case" basis.

"This is not a one size fits all approach," he said. "Rather each incident must be evaluated ... and after balancing competing interests — for example, stakeholders such as prosecutors, investigators, transparency, officer safety, educating the public about what took place and so forth — the police commissioner will at some point determine in each of those instances when it’s appropriate to release such video.”

The Police Benevolent Association, the police's union, is appealing the court's decision to allow the release of footage. A PBA spokesman on Wednesday pointed to a previous statement by PBA president Patrick Lynch that body camera footage is already "available for complete review by a host of investigative bodies including the NYPD’s Internal Affairs Bureau, Civilian Complaint Review Board, all of the District Attorney’s offices and virtually any law enforcement organization that has a need to view it... We have to keep the decisions to randomly release [body camera] video out of the hands of politicians and their appointees.”

In 2018, the NYPD received more than 1,100 Freedom of Information Law requests for body camera footage. The department also has a body-worn camera unit in its legal bureau staffed with about 14 people, according to the NYPD.

Jessica Tisch, the deputy commissioner for information technology, said the deployment makes the NYPD body camera program the largest in the country.

"Most people think you take the camera out of the box and hand it to the officer," she said. "But for an organization the size of the NYPD, the undertaking is wildly more complicated with massive policy, training, legal, interagency coordination … The numbers are staggering."