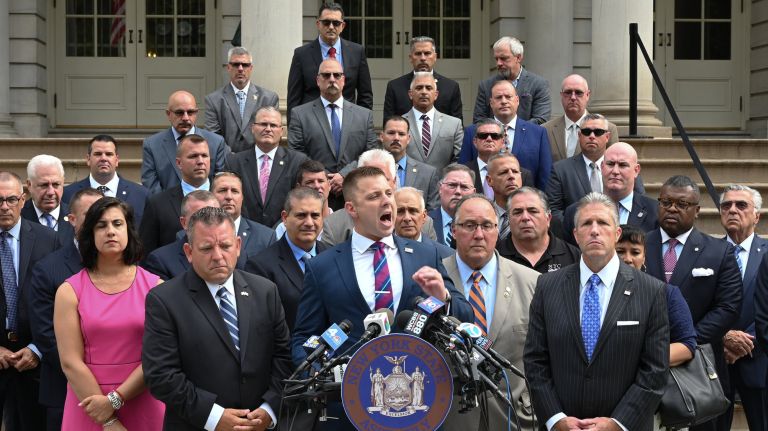 Some state lawmakers want to make the act of throwing water at a police officer punishable by up to four years in prison.

Assembs. Mike LiPetri (R-Long Island) and Michael Reilly (R-Staten Island) announced a bill Wednesday during a news conference at City Hall that would make throwing or spraying any substance at an on-duty police or peace officer a Class E felony. The politicians were joined by Assemb. Nicole Malliotakis (R-Staten Island/Brooklyn) as well as representatives from several police unions.

The legislation is being proposed amid a spate of viral videos showing people throwing water at NYPD officers on several occasions earlier this month.

The most recent incident was on July 24 in Queens, where surveillance video captured a man walk up to two officers near 86th Street and Jamaica Avenue and douse them using a water bottle while apparently filming the encounter with his phone. The suspect, identified as Steven Larosa, 35, of Brooklyn, was charged Thursday with harassment and obstructing governmental administration, police said.

Patrolmen's Benevolent Association president Patrick Lynch said the incidents show anti-police rhetoric is on the rise, and warned that the viral videos could embolden some New Yorkers. “If folks will dump water over the heads of New York City police officers, they’ll do it to everyone.”

LiPetri called the water-throwing “detestable” and blamed Mayor Bill de Blasio for fostering a “culture of disrespect” against police that has reached a tipping point.

“It’s a sad day in the history of New York State when we have to legislate civility,” the lawmaker said. “Gone are the days of peaceful protest. We now have individuals literally drenching on-duty police officers with buckets of water during routine patrols. … This time it’s water, but what’s next? Gasoline? Acid?”

De Blasio, who is in the midst of a presidential campaign, was in Detroit Wednesday ahead of the Democratic primary debate. In response to LiPetri’s comments, press secretary Freddi Goldstein defended de Blasio's record on police-community relations.

“The mayor has spent the last five years working to improve relations between police and the communities they serve,” Goldstein said Wednesday. “He will never tolerate disrespect against our officers and will always be the loudest voice in their defense.”

If the legislation is passed, anyone who is convicted of throwing a substance at a police officer could face a sentence of one to four years in prison.

Anne Oredeko, supervising attorney of the racial justice unit for The Legal Aid Society, criticized the legislation as an overreaction, noting that it would put water-dousing cops in the same legal category as "third-degree rape, female genital mutilation, and fourth-degree arson."

"It’s truly an embarrassing day for the New York State Legislature when its lawmakers are willing to waste time and energy to introduce legislation to criminalize water splashing on police ... As if officers do not already have many legal protections — as evidenced by the immense difficulty that black and Latinx communities have experienced when attempting to hold individual officers and precincts accountable for gross violations of human rights," Oredeko said. "Instead of wasting time on chasing sensational headlines, these legislators should focus on the true needs of their constituents."