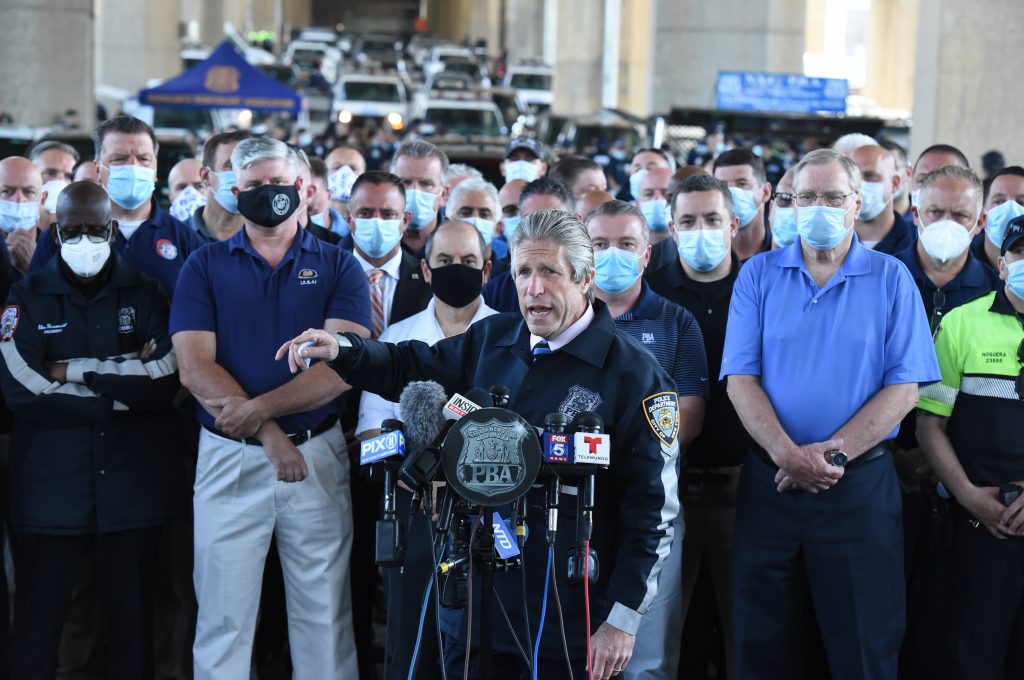 Police unions, led by the PBA President Pat Lynch, blasted the state legislature for not including them in negotiations on changes to 50A or any other police related bills. (Photo by Todd Maisel)

Leaders of New York’s police unions blasted the state legislature Tuesday for making changes to laws affecting them in the wake of the George Floyd police-involved killing, accusing lawmakers of “not giving us a seat at the table.”

Nearly 100 union leaders and cops massed for the June 9 press conference under the RFK Bridge on Randalls Island, to address inequities in the way the legislature is dealing with police-related bills. They also expressed frustration with the continuing riots and violence against them, threats of “defunding” and increases in violent crime.

The unions are coming off of 12 days of protests and violence, most of it directed at police officers after the death of George Floyd in Minneapolis at the hands of a police officer Derek Chauvin. While union leaders called the killing “disgusting,” they claim there have already been numerous changes made to policing which has made New York’s officers the “best in the world.”

Pat Lynch, president of the largest of the unions, the Police Benevolent Association, said his officers have been abused and attacked at a time when crime is rising, yet, the city is discussing “defunding” the NYPD and “tying our hands behind our backs.” He noted that there were 40 people shot last week alone, and there were 7 people shot just last night and a total of 10 shootings for the evening; hundreds of stores were vandalized and looted during protests, and cops were attacked with bricks.

“The message from City Hall is that there will be a soft touch and the criminals know it,” Lynch said. 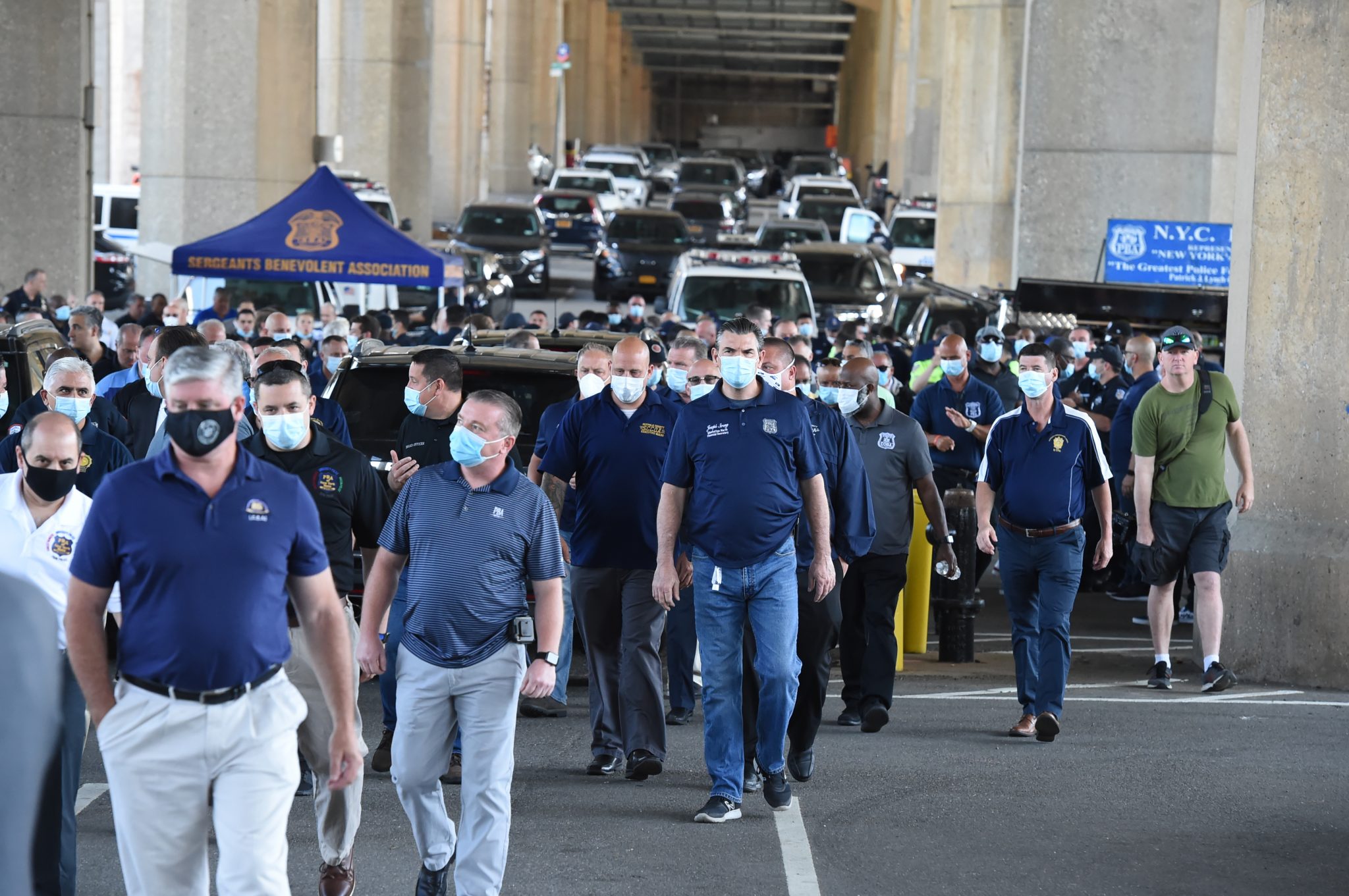 Police unions, led by the PBA, blasted the state legislature for not including them in negotiations on changes to 50-a or any other police related bills. (Photo by Todd Maisel)

“While folks were protesting, they, the looters, were breaking down doors, climbing in windows, pulling out the weapons they are not afraid to carry. We’ve had violence on our streets, hiding amongst protestors,” Lynch added, flanked by union leaders from across the state.

The vast majority of the looting was violence was confined to the period between May 29 and June 2. The city imposed a curfew on June 1 to help abate the issue.

“Folks who bring their signs and go out and protest, we don’t criticize them, we police them,” Lynch said. “But we believe there are people who are guiding them from outside our communities who believe in violence who threw the stone, who broke the window that caused the violence that injured 300 police officers, some viciously – that’s who we denounce,” Lynch said. 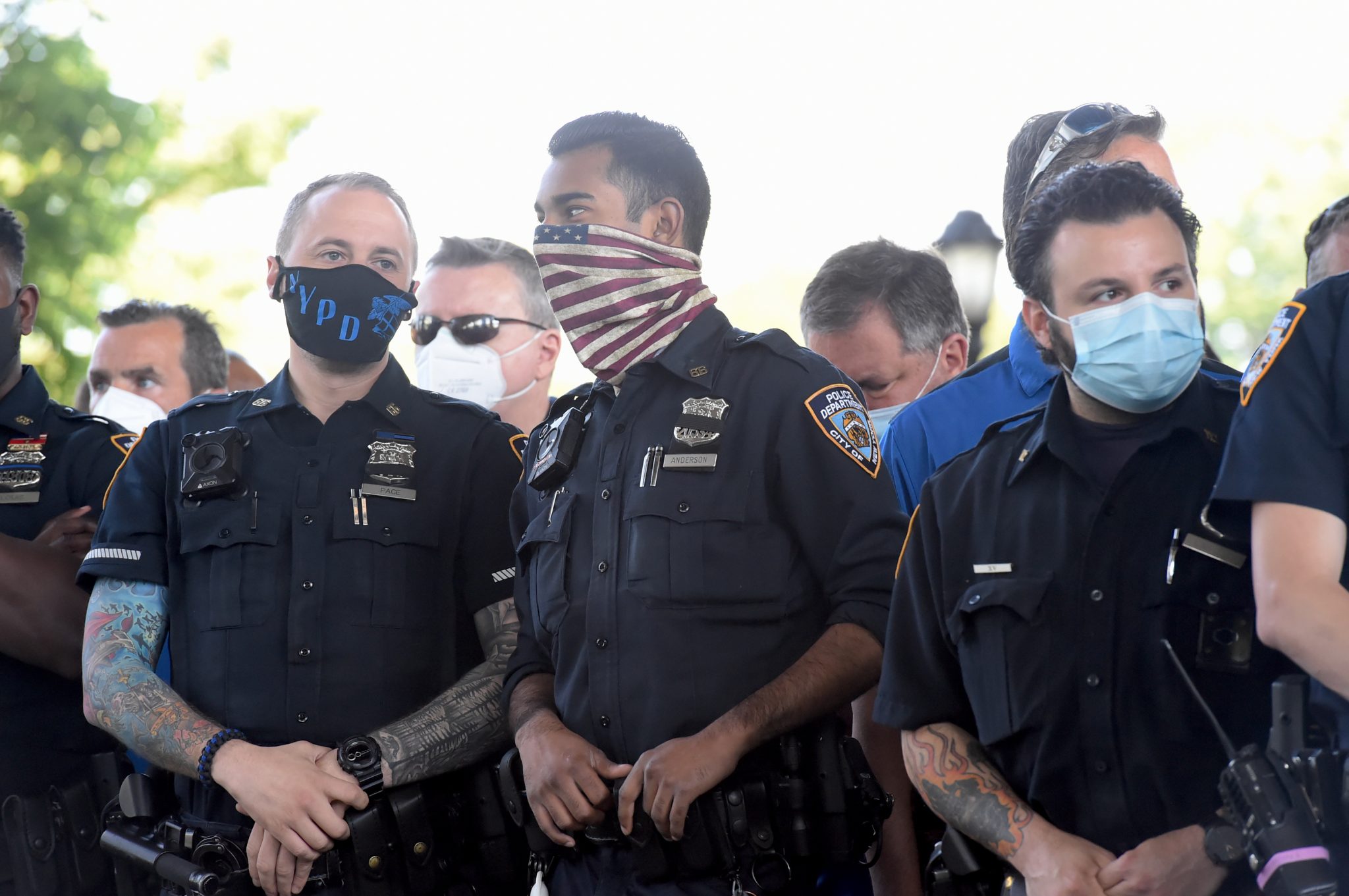 Lynch, a 37-year veteran of the NYPD, condemned the police-involved killing of Floyd in Minneapolis as murder.

“Let us be unequivocal – in all my time I have never seen time when not one law enforcement would support eight minutes, there was no struggle and no reason,” he said. “I think I can speak on behalf of every law enforcement – it was wrong and we denounce it from the beginning.”

But Lynch also blasted legislators for “demonizing the police as though we are the problem – as though we broke the window, that we caused the violence that is absolutely outrageous.”

He focused his wrath on the elimination of 50A, the law that protects anonymity of officers accused of brutality and misconduct. He said the law would allow for every accusation, proven or not, to be listed against an officer, and would risk the lives of cops and their families by providing personal information to the public. He claims most legislators “haven’t even read the bill.”

“Why aren’t you speaking to all the stakeholders?” Lynch said, referring to legislators creating changes to 50A. “Why aren’t you asking the opinion of professional law enforcement? They won’t even give us a seat at the table. If they did, we might be able to offer compromises or not. But we don’t even have a seat. Why aren’t you seeking our advice? Maybe we’d be reasonable?”

Also critical of the 50A changes was Elias Husamudeen, president of the Corrections Officers Benevolent Association, who said changes to the law endangers his officers who he said “are assaulted every day.”

“We work with gang members every day and they are in communications with people on the street so 50A will not go far enough to protect us,” Husamudeen said. “We don’t want inmates to have information on us in jail – it threatens the officers and their families. The legislature plans to take away that little protection that 50A provides.”

The 50-A repeal bill would forbid the release of private information about police officers, such as places of residence.

Some City Council members and the mayor are discussing “defunding” the NYPD, meaning that they will cut the department’s budget and shift resources toward other programs. Mayor Bill de Blasio has suggested large cuts to go towards youth programs serving communities of color.

Lynch dismissed the “defunding” idea as a “slogan on a poster that has “many definitions.” He said some believe it means “getting rid of the police department.”

“It’s wrong, we don’t have enough resources to protect the community,” Lynch said. “How does it effect the community – you won’t have police officers on your corner, not just because of the defunding, but because we have been pulled back from doing our job we’re you say to a criminal we are going to have a soft touch and the D.A.’s say we’re not prosecuting no matter what is brought in here. Now the D.A.’s say they wont prosecute those in the riots, why did the bosses send us out in the first place? Who’s left holding the bag? Right here. We won’t prosecute, but instead, we are sending you out anyway.” 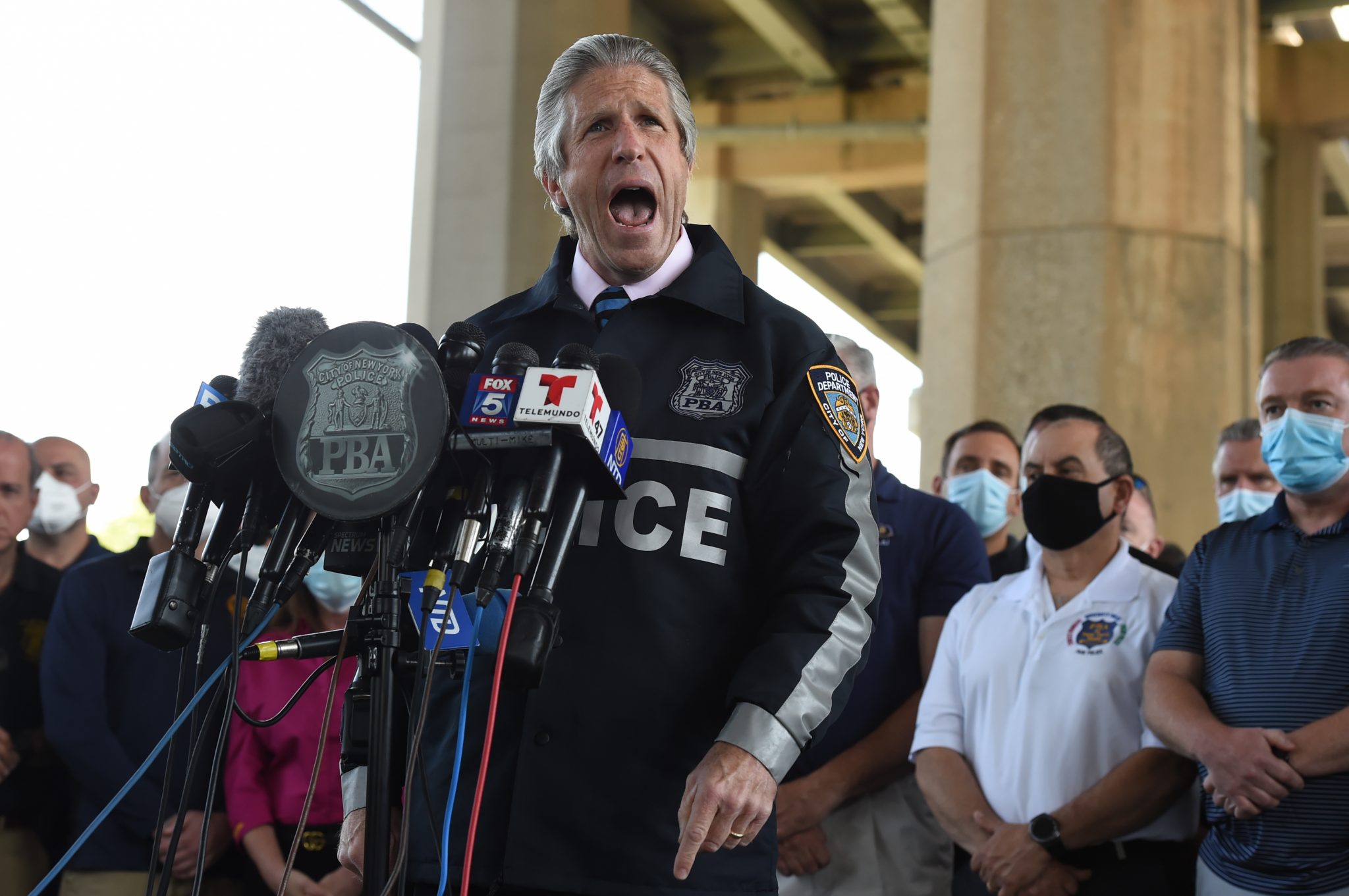 Police unions, led by the PBA, blasted the state legislature for not including them in negotiations on changes to 50-a or any other police related bills. (Photo by Todd Maisel)

Lynch blasted the Brooklyn District Attorney Eric Gonzalez, who he said would not prosecute rioters, but instead “is prosecuting a police officer who’s boss sent him out to do a job in a bad situation in chaotic times.” He referred to Vincent D’Andreia, who was arrested Tuesday for shoving a 20-year-old woman to the ground during a May 29 protest in Brooklyn in an incident caught on camera.

“And you know what, my grey hair told me that was going to happen. Everyone walked away from him and there was no longer a boss standing next to him. The brass threw them under a bus,” Lynch said. “The DA said ‘we don’t have time to prosecute criminals, but we’ll prosecute you.'”

Ed Mullins, president of the Sergeants Benevolent Association, a strident critic of the mayor, said the city and the department were not ready for the rioting and much of the equipment they have “was not deployed.”

“It took so long for us to get the equipment to stop the riots,” said Mullins adding, “At the end of the day, Chief [of Department Terrence] Monahan is in charge, whether we agree with him or disagree with him. There should be accountability as to why we had 300 cops hurt, why stores were broken into, windows smashed, cars were set on fire, why did we loose control of the city. He was accountable so what did he do to stop this?”

On 50A, Mullins said “it will be the people of the city who will have to live with the legislation.”

“If we get another round like we did with bail reform, and we saw a lot of victims as a result of that bail reform- the changes made will be on the legislators, it’s on City Hall, and all the voters who passed it through – don’t blame the cops,” he said. 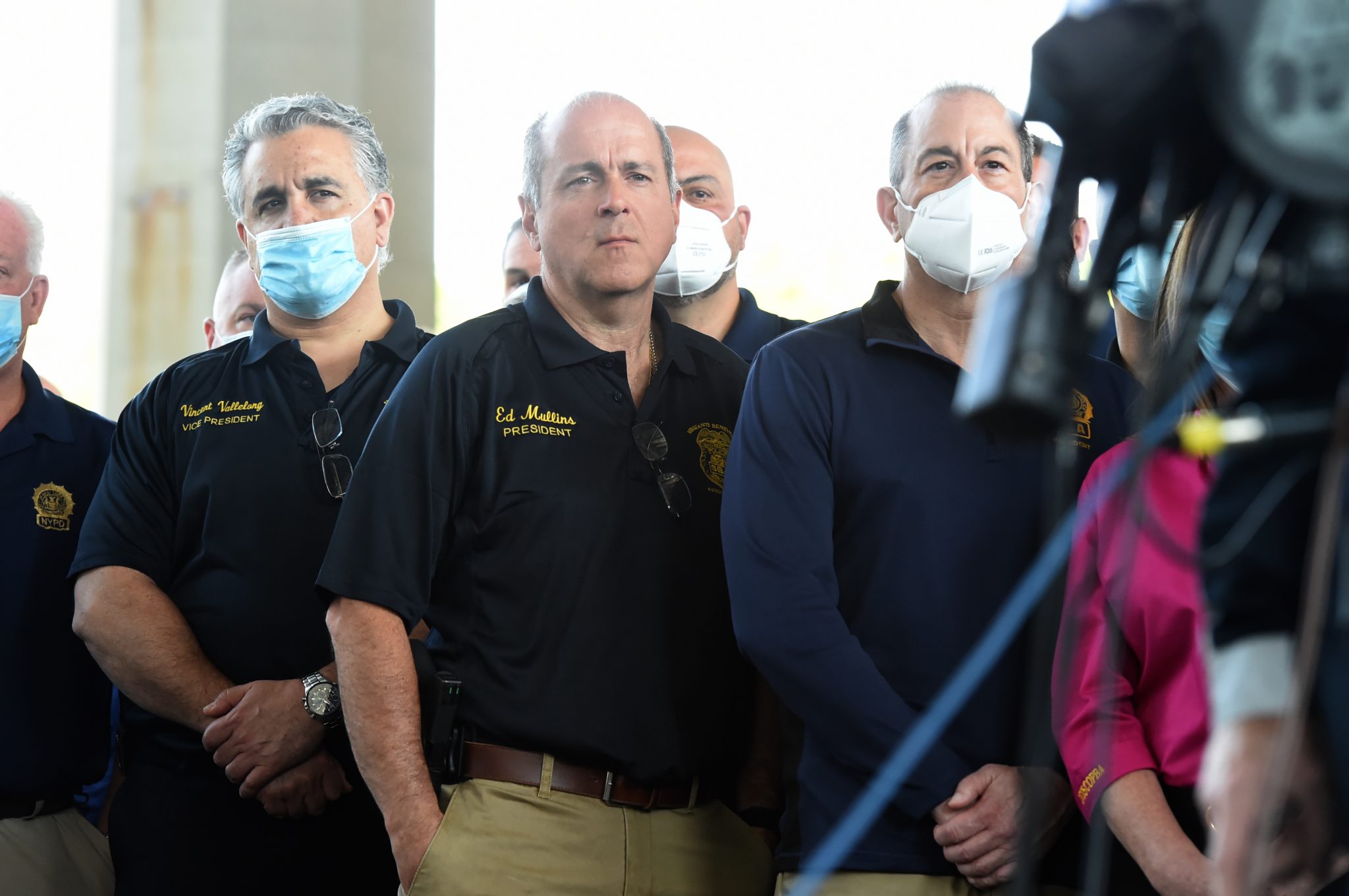