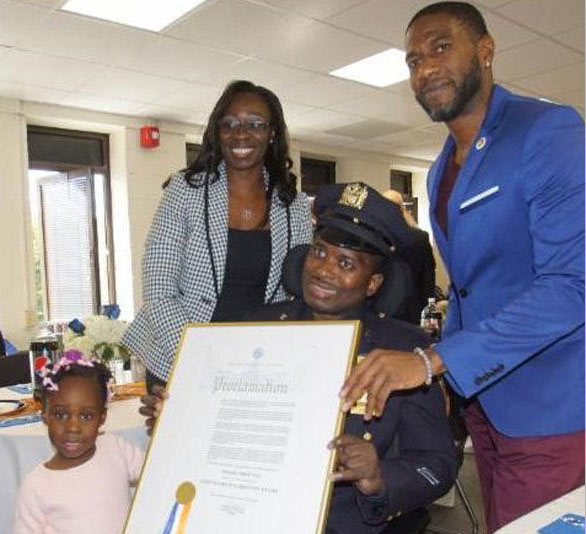 LONG ROAD BACK: Detective First Grade Dalsh Veve, with his wife and daughter to his right, holds a City Council proclamation praising him for ‘exemplary behavior in the line of duty.’ Detective Veve sustained a traumatic brain injury in June 2017 when a stolen car whose occupants he was questioning dragged him for two blocks in his Brooklyn precinct. He has shown some improvement but is not back to where he was before the dragging. Photo: City Council/Ernest Skinner

A police officer who almost died when a 15-year-old allegedly driving a stolen car dragged him more than two blocks was honored Oct. 25 by the city and the NYPD.

Detective First Grade Dalsh Veve spent nearly a year in various hospitals after suffering a traumatic brain injury when he was thrown from the car June 3, 2017. Family and colleagues said he was showing improvement but still not back to where he was before the incident.

In a ceremony at his precinct, the 67th in East Flatbush, Brooklyn, he was presented with the Chief Patrick D. Brennan Police Officer of the Year Award. And City Councilman Jumaane Williams gave him a Council proclamation.

“Detective Veve’s heroic efforts showed exemplary behavior in the line of duty which is worthy of commendation and celebration in the tradition of Chief Brennan,” it said.

The Chief is a former commander of Patrol Borough Brooklyn South, which includes the 67th Precinct. The award is given annually to honor an officer who has served his or her community with distinction.

Chief of Department Terence Monahan said Detective Veve “is a true hero of the City of New York."

“It is a total and complete honor to be standing here today as you receive this great award,” Mr. Monahan told the Detective, who was promoted from Police Officer after he was injured. “To see you put on that Detective shield, Detective First Grade Dalsh Veve, wearing the shield for the first time — it is an honor.”

“Detective Veve is a shining example of the bravery, dedication, and strength that the NYPD, the City Council, and the people of New York should celebrate…” Mr. Williams said. “It was a privilege today to recognize him for his policing work and for who he is both in and out of uniform. His ongoing recovery is an inspiration to many.”

Detective Veve, a 10-year veteran of the NYPD, had pulled over the stolen car and was questioning its occupants when Justin Murrell sped off down Tilden Ave., authorities said. Detective Veve managed to get off two shots, one of which struck the teen in the face, before Mr. Murrell made a sharp turn that threw him from the vehicle.

Mr. Murrell was charged as an adult with attempted murder.

Detective Veve did not speak at the 67th Precinct ceremony. But his wife, Esther, who was accompanied by their young daughter, Darshee, told the Daily News, “I think we can all see he’s much better than when he left the hospital — much better than when the incident first happened and right after. We’re doing great overall.”

Police sources told the News that Detective Veve began showing improvement in January. Two months after that, he began recognizing people who were visiting him. He was released from a rehab facility May 7. News reports said he uses a wheelchair and is unable to speak.