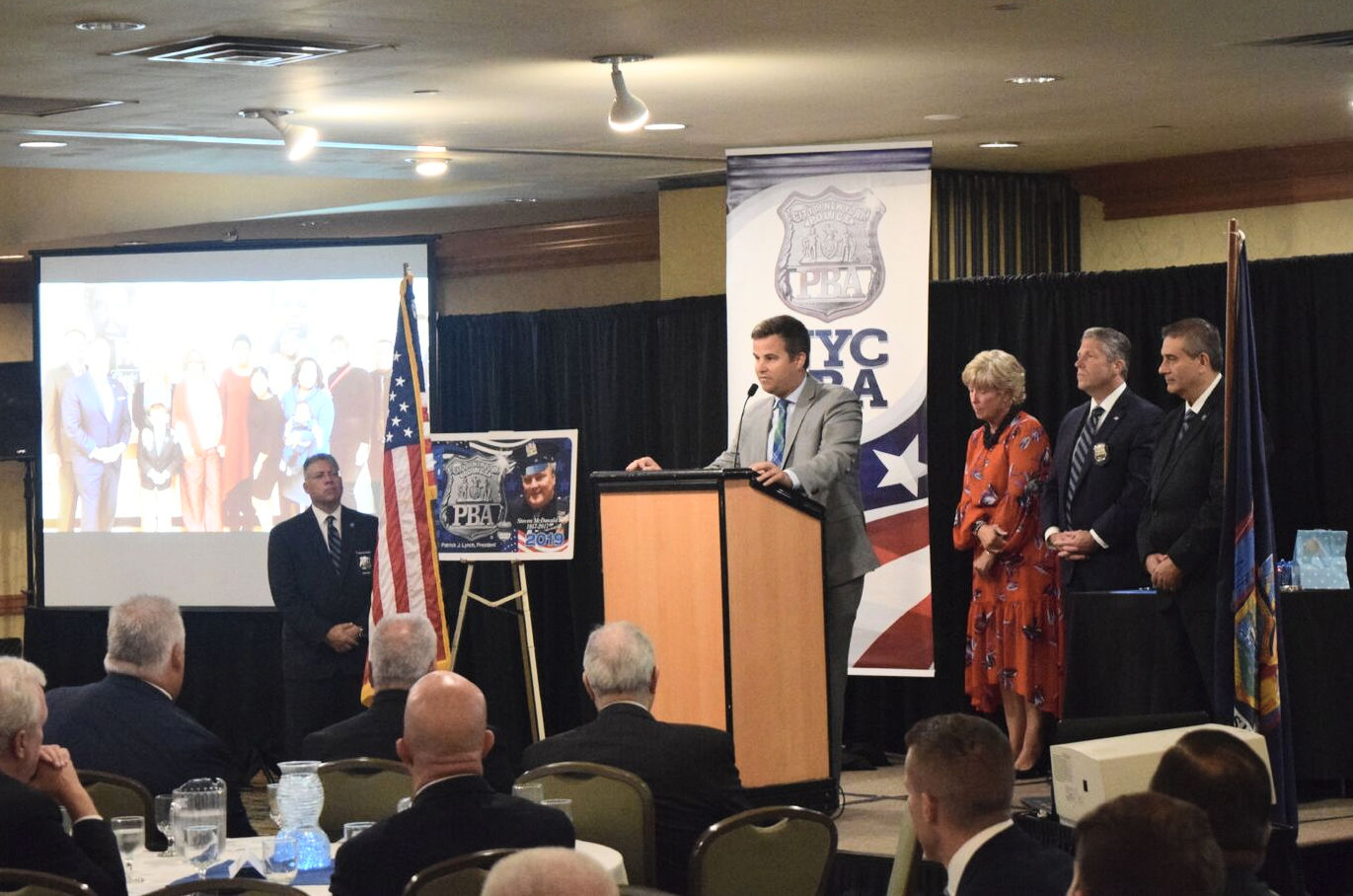 IT’S ALL BECAUSE OF DAD: NYPD Sgt. Conor McDonald, with his mother Patti Ann behind him, addresses the Patrolmen’s Benevolent Association convention in Albany after mother and son were named the union’s Persons of the Year. Their father and husband, Det. Steven McDonald, died last year, 31 years after he was shot and paralyzed by a teenager in Central Park. Detective McDonald spent the rest of his life carrying his message of forgiveness and hope around the department, the city and the world. Behind Sergeant McDonald and his mother are PBA President Patrick J. Lynch and First Vice President John Puglisi.

The Patrolmen’s Benevolent Association honored Patti Ann and Conor McDonald—the widow and the son of Det. Steven McDonald—Aug. 30 as the union’s 2018 Persons of the Year.

PBA President Patrick J. Lynch presented the awards to Mrs. McDonald and Sergeant McDonald—who followed in his father’s footsteps by joining the NYPD—before hundreds of PBA delegates, other NYPD officers and officials and dignitaries at the union’s convention in the Red Lion Hotel in Albany.

Detective McDonald, who died in January 2017 at the age of 59, was shot multiple times by a 15-year-old boy he had stopped while patrolling in Central Park in July 1986, leaving him a quadriplegic. He dedicated the rest of his life to spreading a message of hope and forgiveness, making him an inspiration to the city, the nation and the world.

“Patti Ann McDonald, who was pregnant with Conor when the shooting occurred, stood by Steven’s side and supported him through challenges they could never have imagined when they were married a few months earlier,” Mr. Lynch said.

“Steven often credited her with giving him the will to live, so they could raise their son and he could spread his international message of peace and forgiveness.

“While serving as the foundation that Steven and Conor could lean on, she also found time to be elected Mayor of their hometown of Malverne, N.Y., where she is serving in her 11th year,” he added.

Conor McDonald, who became a police officer in 2010, was promoted to Sergeant two years ago. “Conor’s life has been indelibly colored NYPD blue,” Mr. Lynch said. “Besides his hero father, his great-grandfather, grandfather and uncle were all police officers, and NYPD members have been coming in and out of his house since the day he was born.

“Steven, Patti Ann and he all deserve great credit for the courage they have shown in encouraging him to continue in that fine tradition.”