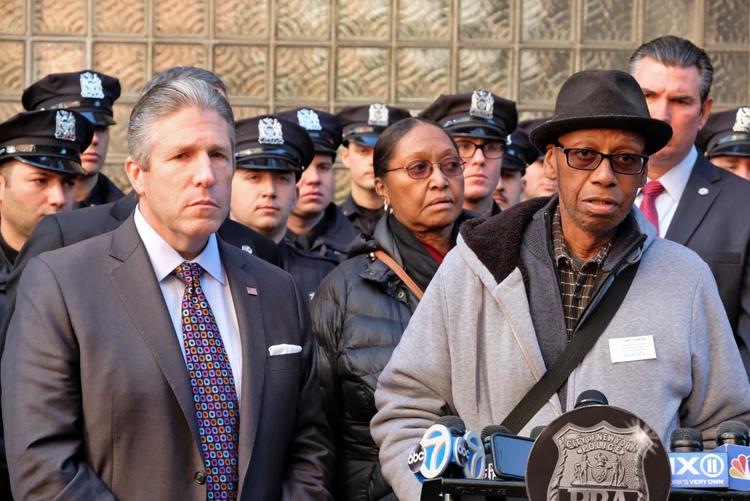 KEEP THEM LOCKED UP: Manny Jones and Gwenna Wright, brother and sister of slain Police Officer Waverly Jones, stand with Patrolmen’s Benevolent Association President Patrick J. Lynch at a press conference outside state parole offices in Manhattan Oct. 19. One of men who killed Officer Jones and his partner, Joseph Piagentini, in 1971 has already been released, and a second is now up for consideration. ‘We have been permanently denied the pleasure of Waverly’s company since that tragic night ibn 1971 and his killer’s family should be denied the same,’ the siblings said.  Photo: The Chief-Leader/Michel Friang

“We must send a message that violence against our police officers is unacceptable, and if you commit that and kill a police officer you would serve the maximum sentence the law imposed.”

Lawrence Byrne, who recently retired as NYPD Deputy Commissioner for Legal Matters, was speaking at a press conference sponsored by the Patrolmen’s Benevolent Association on Oct. 19, the day he gave a victim-impact statement to the parole board on behalf of his brother, Eddie, who was assassinated by drug dealers on Feb. 26, 1988.

The four men convicted of killing him—David McClary, Scott Cobb, Todd Scott and Phillip Copeland—are up for parole. The parole board has released two cop-killers since April, and several more are up for consideration.

They all received sentences of 25 years to life, the maximum available between the end of the death penalty here in 1972 and the legislative passage in 1995 of life without parole, which is now the usual sentence for cop-killers. Changes ordered by Governor Cuomo require the boards to put less emphasis on the seriousness of the original crime and more on such factors as rehabilitation efforts, behavior in prison and remorse.

The PBA believes cop-killers should never be released. “This speaks to the need for an effective death penalty in New York State,” PBA President Patrick J. Lynch said at the press conference. “...Anyone who would so casually kill a police officer would not hesitate to pull the trigger on a civilian. To grant them parole would be a gross abuse of discretion by the sitting parole board.”

He called on the State Legislature to pass laws to govern decisions. “The right to make those policies has to be taken out of the hands of prisoner advocates and must be codified in law,” he said. “There is a place for parole for low-level crimes, but never in the case of cop-killers.”

Officer Byrne was assassinated just five days after his 22nd birthday. He was assigned to guard a house in South Jamaica, Queens owned by a witness in a drug case. It had previously been firebombed.

A car pulled up beside Officer Byrne’s vehicle. Two men got out. While Mr. Scott knocked on the passenger-side window of Officer Byrne’s car, Mr. McClary sneaked up on the driver’s side and shot him. The other two men acted as lookouts.

In a videotaped confession, Mr. Cobb said the killing was ordered from jail by drug kingpin Howard “Pappy” Mason. Mr. Mason is serving life in a Federal “supermax” prison in Colorado. Parole is not available to Federal inmates.

Also at the press conference were Manny Jones and Gwenna Wright, brother and sister of Officer Waverly Jones. Officer Jones and his partner, Officer Joseph Piagentini, were killed by three members of the Black Liberation Army in an ambush in 1971. Officer Piagentini’s widow, Diane, has become a spokeswoman for denying parole to cop-killers.

The first of the killers, Herman Bell, was released in April. The second, Anthony Bottom, is up for release now. The third, Albert Washington, died in prison.

“We, the immediate members of Waverly’s family, firmly believe that his killer should never walk free,” Mr. Jones and Ms. Wright said. “We have been permanently denied the pleasure of Waverly’s company since that tragic night in 1971 and his killer’s family should be denied the same. What is fair is fair. When we get Waverly back, then, and only then, should Anthony Bottom be released from prison. Waverly’s death was a terrible loss for our family and we will have to live with that pain for the rest of our lives.”