Pay Them Salary That Reflects Sacrifice' 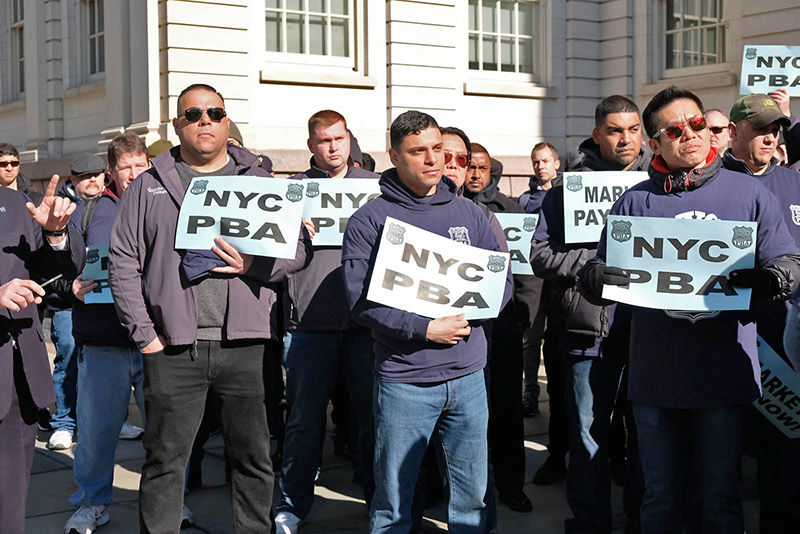 They found allies and advocates among City Council Members.

Thirty-five of the lawmakers—more than two-thirds of the 51-member body—signed a letter to Mayor de Blasio asking that he “do everything” to address “decades of below market-rate pay to New York City Police Officers.”

Few of the Council Members were at the rally, which was organized by Brooklyn City Councilman Chaim Deutsch, but those who attended were adamant.

“They deserve a salary that reflects the sacrifice they make for our city each and every day,” Mr. Deutsch, who graduated from the NYPD’s Citizens Police Academy, said of the officers, a contingent of whom were clad in blue hoodies and jackets bearing the Police Benevolent Association’s crest. “Enough with the talk—it’s time for New York City to walk the walk.”

Night differentials and overtime can increase pay to more than $100,000. But the PBA maintains that both starting salaries and maximums are inadequate, chiefly by citing salaries paid to officers in neighboring jurisdictions, as well as to those in the State Police and the Port Authority, where maximum salaries reach $103,159 and $117,588, respectively.

“We ask you to do more every day. We put burden upon burden upon the NYPD, and we don’t show you the support you deserve,” he said at the rally. “How can we show the respect to our men and women of the NYPD if we pay them the least amount of money of the eight closest jurisdictions?”

While the City Council’s budget hearings are now in full swing, they do not have the power of the purse with regard to police salaries. That would fall to the de Blasio Administration, and specifically to the Mayor’s recently installed Labor Commissioner, Renee Campion.

But a deadlock between the PBA and the city during brief contract negotiations that concluded about 18 months ago led the state Public Employment Relations Board to declare that arbitration might be the only way out of the impasse.

The union subsequently objected to the administration’s decision to appoint Ms. Campion’s predecessor, Robert W. Linn, as its representative on the three-person arbitration panel.

The PBA contended that Mr. Linn's presence would constitute a conflict of interest, since he worked for the union as its outside counsel during yet another contract arbitration involving the PBA, 17 years ago during the early days of the Bloomberg administration. Following the rally, the union learned that four days earlier  Acting Supreme Court Justice David A. Weinstein in Albany had rejected its bid to exclude Mr. Linn from the arbitration.

At the rally, the PBA president, Patrick J. Lynch, praised the letter’s signatories, but, as he has for years, singled out the Mayor, if not by name, for what Mr. Lynch insinuated was his pretense and hypocrisy.

'Pay What We Deserve'

“New York City police officers put themselves at risk each and every day on behalf of folks they don't even know,” Mr. Lynch said, suggesting that his members cannot afford to live in the neighborhoods they patrol at their current salaries.

“Allow us to take care of our family, allow us to rear our family in the communities that we serve, allow us to send them to the schools that we struggle to make better,” he said. “Pay us so generation after generation of police officers can stay in the city we were born and reared in. And pay us so we can set up our children to stay here in this proud city.”

The de Blasio administration, though, maintains that NYPD Officers are well-paid, have no employee health premiums and start reaping full pension benefits after 20 or 22 years of service. It had offered the union annual raises of more than 2 percent a year, consistent with what the city's two largest unions, District Council 37 and the United Federation of Teachers, agreed to last year.

The Mayor’s spokesman, Raul A. Contreras, said the city is dedicated to hammering out a contract.

“We remain committed to working with the PBA to come to a contract agreement that is fair to police officers and taxpayers even though they’ve decided to seek arbitration,” he said in an email. "We proved we can accomplish this across the bargaining table in 2017, and we can do it again now."

Following the nearly 35-minute rally in a sun-drenched City Hall Plaza, a veteran Brooklyn cop, born and raised in that borough, said significant raises were necessary both to maintain a dedicated police force and, by extension, a safe city.

“We deserve not only to remain in the city, but to provide for our families,” said the officer, who has spent his entire 25-year career at the 60th Precinct.

He recalled his early years patrolling Coney Island, Brighton Beach and other southern Brooklyn neighborhoods during an epoch when violent crime, including murders, was at near-record highs.