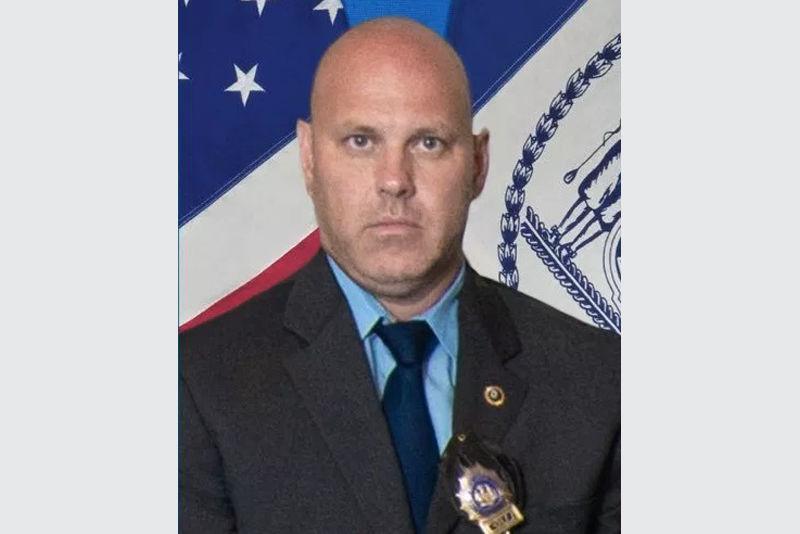 DETECTIVE MOURNED: Detective Brian Simonsen, 42, was shot and killed in an apparent friendly fire incident in Queens while investigating a robbery in progress. NYPD Photo

An NYPD Detective was shot and killed in a friendly-fire exchange Tuesday evening as he and other officers confronted a would-be robber at a Queens cellphone store. A Sergeant was also shot but was expected to survive.

The Detective, Brian Simonsen, 42, along with his partner and supervisor, Sgt. Matthew Gorman, and six other officers were responding to 911 calls of an armed robbery in progress at a T-Mobile store on 120th St. near Atlantic Ave. shortly after 6 p.m., Force Investigation Division Chief Kevin Maloney said at a press conference Wednesday afternoon. Detective Simonsen and Sergeant Gorman, who were nearby doing surveillance on another case, got to the store about three minutes later, about the same time the six uniformed officers from the 102nd Precinct pulled up.

Sergeant Gorman and two others officers entered the store after peering through windows and not seeing anyone inside. They were immediately confronted by the robber, later identified as Christopher Ransom, a 27-year-old with a long rap sheet, who raised what turned out to be an imitation firearm and charged at the officers, who retreated, Chief Maloney said. When Mr. Ransom reached the front of the store, all but one of the officers fired, hitting him several times, but also fatally wounding Detective Simonsen and hitting Sergeant Gorman once in the leg.

All told, seven service members discharged a total of 42 rounds, Chief Maloney said. Detective Simonsen, who was not wearing a bullet-proof vest, was hit once in the chest.

Fellow officers and a passing motorist brought him and Sergeant Gorman to Jamaica Hospital Medical Center, about a mile away. A hospital trauma team tried to save the Detective, but could not.

“Make no mistake about it—friendly fire aside—it’s because of the actions of the suspect that Detective Simonsen is dead,” Commissioner James P. O’Neill said at news conference about five hours after the shooting.

Detective Simonsen, who was married and lived in Suffolk County, had spent his entire 19-year NYPD career with the 102nd Precinct, starting as a patrol officer. He was the precinct’s delegate for The Detectives’ Endowment Association and had attended a delegates meeting Tuesday morning.

“He was actually excused from duty,” the DEA’s president, Michael J. Palladino, said at the Tuesday night press conference. “He felt compelled to go to the delegates meeting, ignore the excusal and go to work, and that’s why we are here tonight.”

Chief of Department Terence Monahan said Detective Simonsen was an exemplary and dedicated officer. “He didn’t have to go to work but he made a decision that he had a job to do,” he said at the Wednesday afternoon press conference. He was processing a robbery arrest in the stationhouse when Sergeant Gorman, his supervisor, told him that suspects in an unrelated robbery were congregating nearby.

While surveilling those suspects, they were alerted to a robbery in progress at the T-Mobile store.

“He was the definition of a cop’s cop. There wasn’t a person in the 1-0-2 Precinct who didn’t know Brian, from the cleaner up to the commanding officer; everyone in that precinct knew Brian, knew him well,” Chief Monahan said. “He was the one that you called, he was the one you reached out to if you had a problem in that command. And it wasn’t just the cops that knew Brian well, it was the community: the storeowners, the building owners, the superintendents...Everyone knew Brian was the cop that you reached out to if there was a problem that needed to be handled.”

Mr. Palladino questioned why Mr. Ransom was not behind bars. “Why was someone with such an extensive arrest record out in the street and not incarcerated?” he said.

Sergeant Gorman, an 8 1/2-year NYPD veteran with the 102nd Precinct’s Detective Squad, was shot once in the leg and was being treated at the hospital.

“He’s not the least bit concerned about his own injury; he’s overcome by the emotion of losing his friend and his partner, Brian Simonsen, as are all the officers of the 1-0-2 Precinct that I visited today,” Chief Monahan said.

Mr. Ransom, who police said was homeless, has been charged with second-degree murder, aggravated manslaughter, robbery, assault and menacing.