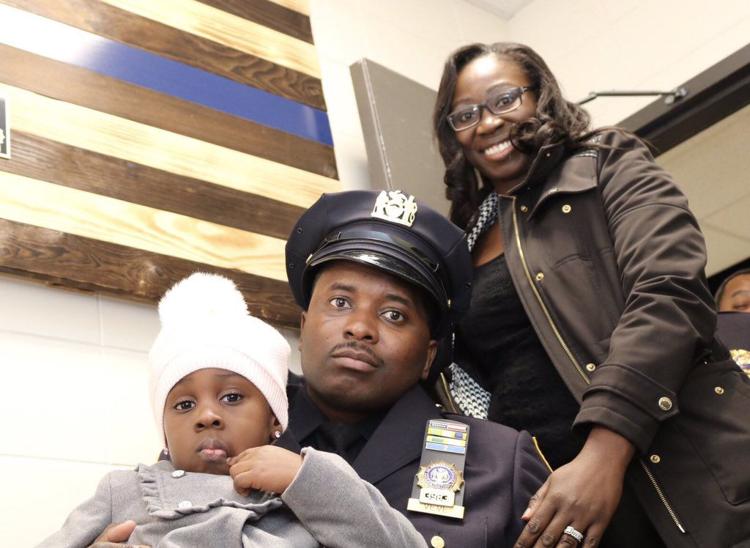 ‘JUSTICE FELL SHORT’: Dalsh Veve suffered severe head and brain injuries when he slipped while hanging on to a stolen car being driven at high speeds by Justin Murrell that have left him with severe memory problems and difficulty recognizing his wife and daughter. Those injuries explained the outrage from unions, the NYPD and the Brooklyn District Attorney’s Office when a Brooklyn Supreme Court Justice sentenced the violence-prone teen to a shockingly light prison term. NYPD photo

Police and union officials were equally infuriated by the 1-1/3-to-4-year prison sentence given to a Brooklyn teenager who gravely injured a Police Officer in June 2017 by dragging him several blocks at high speed in a stolen car before the officer, Dalsh Veve, was thrown off the vehicle.

“She spit on every shield on every chest in the city,” the president of the Police Benevolent Association, Patrick J. Lynch, said of Brooklyn Supreme Court Justice Ruth Shillingford following the Jan. 23 sentencing of Justin Murrell, now 17.

“How dare she listen to this evidence and come up with this result? This hero Police Officer stood the blue line every day to protect our rights,” Mr. Lynch said. “That mutt crossed the line every time he could.”

“A mere 16 months-to-4 years in prison for the criminal who caused catastrophic and lasting injuries to #NYPD Detective Dalsh Veve is an absolute disgrace,” he wrote on Twitter. “Our brave & selfless public servant, his family, and all #NYC cops deserve far better. Justice fell short today.”

Mr. Murrell, whose long rap sheet includes three arrests on armed-robbery charges, was convicted last month of first-degree assault but found not guilty of an attempted-murder count. He tried as an adult but was sentenced as a juvenile. He faced a maximum of 10 years in prison. Mr. Veve’s wife, in court before the sentencing, pleaded with Judge Shillingford to give Mr. Murrell the entire 10 years behind bars.

“His decisions were adult decisions,” Mr. Lynch said following the sentencing, which was attended by dozens of NYPD officers. “The results changed lives. This potential cop-killer will be back on the streets. When he’s on the streets, he’s going to try to kill you.”

Late on the night of June 3, 2017, Officer Veve and six other officers were responding to a noise complaint at a party when he approached a black Honda Civic parked on Tilden Ave. to speak with its occupants about an earlier shooting. While the officer was peering inside the car, Mr. Murrell, who was at the wheel, sped off.

Prosecutors said the youth, then 15, hit speeds as high as 58 mph with Mr. Veve hanging on. Just before losing his grip on the speeding car, Officer Veve was able to fire two shots from his service weapon and Mr. Murrell was hit once, in the jaw.

Officer Veve, a 10-year NYPD veteran assigned to the 67th Precinct, suffered severe head and brain injuries. Mr. Murrell took himself to a local hospital, where he was treated and arrested.

Officer Veve spent nearly a year in hospitals and rehabilitation facilities before returning home last May. He is confined to a wheelchair and reportedly has ongoing memory problems and difficulty recognizing his wife and child.

“This defendant had numerous contacts with the criminal justice system and was given numerous opportunities to get on the right path. Yet he has repeatedly proven that he has no regard for the rule of law and is a danger to society,” Mr. Gonzalez’s chief spokesman, Oren Yaniv, said in a statement. “The judge should have therefore imposed the maximum sentence and it is regrettable that she failed to do so. The rule of law, the safety of our police officers and the circumstances of this case demanded a more appropriate penalty.”

“The sentence is inexplicable,” he said during a Jan. 24 phone interview. “And this judge has obviously drank from the no-bail, no-jail political Kool-Aid served up by today’s political leaders.”

He said that since Mr. Murrell had already spent more than 19 months in jail, it was possible he could be freed soon.

“Even in the bad old days when crime was completely out of control...a progressive and liberal agenda existed, but within the four wall of the courtroom it played little or no role and you could always have confidence that justice would prevail,” Mr. Palladino said. “That’s not the case today. Politics rules what goes on in the courtroom.”