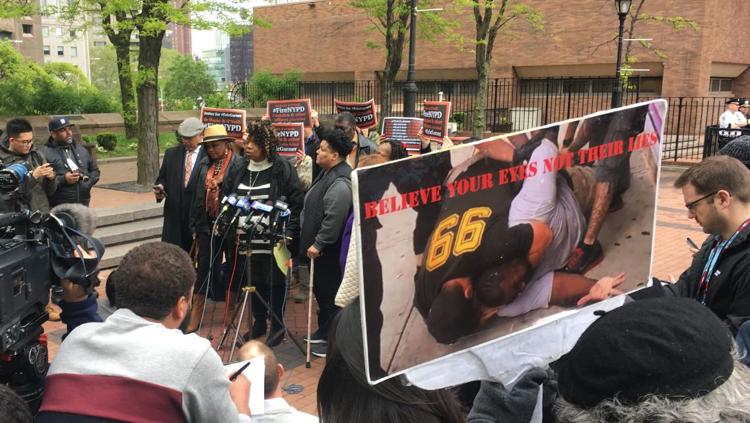 TESTIMONY: Eric Garner’s mother, Gwen Carr, at the microphone stand, spoke outside NYPD headquarters on May 14 after attending the second day of Officer Daniel Pantaleo’s trial on administrative charges that he was responsible for Mr. Garner’s death. She called for the prosecution of other officers present the day her son died following a confrontation with police in the Tompkinsville section of Staten Island. The Chief-Leader/Richard Khavkine

In testimony during the second day of Officer Daniel Pantaleo’s NYPD disciplinary trial Tuesday, the head of training at the Police Academy said the officer’s maneuver in his takedown of Eric Garner was a department-prohibited chokehold.

“I believe what we see meets the definition, yes,” Inspector Richard Dee, the Commanding Officer of the Recruit Training Section at the Academy, said after a showing of portions of the cellphone video of the July, 17, 2014 incident that led to Mr. Garner’s death.

During questioning by Jonathan Fogel, a lawyer for the Civilian Complaint Review Board, Inspector Dee testified that Officer Pantaleo, who joined the NYPD in 2006, would have known that the chokehold was prohibited.

The technique was banned by the NYPD in 1993 and its prohibition is addressed several times in both the recruit guide and the NYPD’s Patrol Guide, Mr. Dee said under questioning.

“There were no exceptions,” he said. He defined a chokehold as obstructing or putting pressure to the throat or windpipe in a way that could obstruct breathing. “They are deadly,” he said of the maneuvers.

Mr. Pantaleo is being tried on administrative charges, although prosecutors must meet a burden of proof greater than just whether he violated the NYPD’s Patrol Guide by using the department-banned technique. Mr. Fogel must establish that Officer Pantaleo committed either third-degree assault, by recklessly causing injury, or strangulation, defined as criminal obstruction of breathing causing serious injury.

Mr. Pantaleo, who has been on desk duty for most of the past 58 months, faces termination if he is found guilty.

On cross-examination of Inspector Dee, one of the officer’s lawyers, John Tynan, in a bid to show that his client was being prosecuted for his use of a chokehold and not an equivalent criminal statute, suggested that chokeholds were not addressed in the penal code. Inspector Dee replied that strangulation was a crime.

Mr. Tynan further sought to establish that Officer Pantaleo, as evidenced by the video, was exceedingly patient once it became clear that he and his partner wanted to arrest Mr. Garner.  Inspector Dee, a 30-year cop, agreed, saying, “The amount of time they waited to go hands-on, I like that.”

Mr. Tynan also suggested Officer Pantaleo, rather than using a chokehold on Mr. Garner, had used a so-called "seat-belt" maneuver—which involves putting one arm under a person’s underarm and the other arm around the person’s shoulder to bring them down.

But Inspector Dee said that while officers are trained to use a variety of techniques to subdue a person resisting arrest, it was unlikely that Officer Pantaleo would have learned the seat-belt technique during either his academy training or his plainclothes training in 2008 since it did not become part of the NYPD’s curriculum until 2011.

‘Tying Themselves in Knots’

But the Police Benevolent Association said Mr. Fogel’s reliance on Inspector Dee’s testimony that the officer had not been trained in that technique had "failed."

The PBA, which has engaged in a fierce defense of Officer Pantaleo since the incident, said that his training Sergeant later in the trial would will confirm he taught the officer the seat-belt takedown.

In a statement released following Tuesday’s portion of the trial, the PBA also said that the prosecution had not “provided any evidence of...criminal conduct.”

“These CCRB prosecutors are tying themselves in knots to prove a case that the judge has already said is not enough,” PBA President Patrick J. Lynch said in a statement. “But CCRB knows full well that it is wasting everyone’s time by scrounging for evidence to suggest P.O. Pantaleo committed a rulebook infraction. They know that he did not commit any crime, and that he should be cleared of all charges against him.”

The city’s Medical Examiner is scheduled to testify Wednesday.

Officer Pantaleo’s chief lawyer, Stuart London, said he did not yet know whether the officer would testify in his own defense.