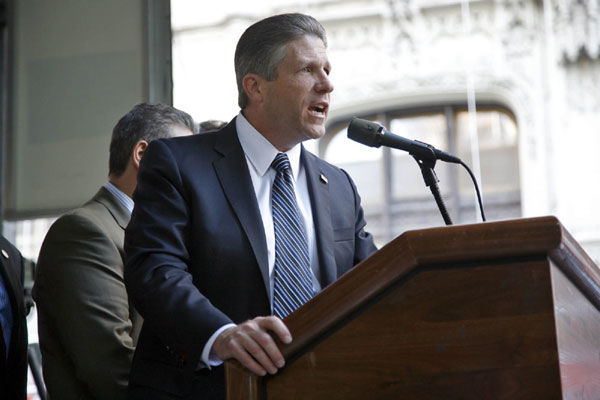 The case for the change at his union, Mr. McKechnie said shortly before the vote, was, “There’s over 400 [Transit] policewomen. If we’re going to truly represent everybody, the title should be generic.”

Mr. Caruso cited an intangible reason for not altering the then-95-year old union’s name, saying that it was an integral part of its tradition. There was speculation that he had other reasons for resisting, ranging from not wanting to be seen as taking his cue from the head of a union with fewer than 4,000 members to the possibility that there were far more old-fashioned male cops in the PBA than there were female Police Officers.

But 30 years later, the union finally aged well enough at 125 to acknowledge the growing representation of women in its ranks, and on Jan. 8, with no publicity about it, PBA delegates voted nearly unanimously to become the Police Benevolent Association of New York City.

Responding to a question after the name change appeared on union letterhead in an email defending two of its members who were accused of police brutality, PBA President Patrick J. Lynch said in a statement:

“The change is long overdue. Our union hasn’t represented anyone with the title of ‘patrolman’ since 1973.

"We do, however, represent more than 24,000 New York City police officers—both men and women—who want a union that is fighting to improve their lives and working conditions now, in the 21st century. That fight is our most important tradition, and it will never change.”

The three decades between Mr. Caruso’s invoking tradition and last week’s dispensing with it—a task eased, Mr. Lynch noted, by one convenient fact: “When we hit the streets to demand fair treatment and a market wage, we will still chant P.B.A.”—made clear that the former union president wasn’t the biggest obstacle to use of the more-inclusive name.

Mr. Lynch, who became president in 1999, first proposed the change in 2002 and had it rejected by delegates.

The number of female PBA members has continued to grow, but they still make up just 20 percent of the bargaining unit—there are 19,116 men in the rank of Police Officer and 4,768 women, according to Det. Sophia T. Mason of the NYPD’s Office of the Deputy Commissioner for Public Information.

But the 74-year-old Mr. McKechnie, who lost his re-election bid soon after the name change—primarily because of his opposition to the merger of the old Transit Police Department into the NYPD, which led the Transit PBA to cease operations in the mid-1990s—said in a phone interview Jan. 10 that the strong PBA vote was an indication that Police Officers have changed in ways that go beyond the new name.

“Its time has come; it’s appropriate,” he said. “We’re no longer a generation of males, and it shows women are now fully accepted in the job.”

That wasn’t necessarily the case when the Transit PBA took its step into a more-modern view of who was in the union. When the 420-295 vote was recorded on June 12, 1989, Mr. McKechnie lamented two aspects of it: that about 2,400 ballots were not returned, and that the “yes” votes for the name change were just a shade above his total female membership.

“We had some resentment,” he acknowledged last week. “Some guys would say ‘they’re not as strong as us, not as big.’ But there are differences in physical qualities among the men who are Police Officers, too.”

He continued, “Pat did the right thing in 2002. I guess there wasn’t a sense of equality [among PBA delegates] at the time.”

Mr. McKechnie concluded, “I give Pat a lot of credit. He didn’t give up on it.”