PBA Defends Officers' Use of Force in Battle Outside Subway Station

Beaten Man Made Video Bragging of Provoking Cops, Then Suing 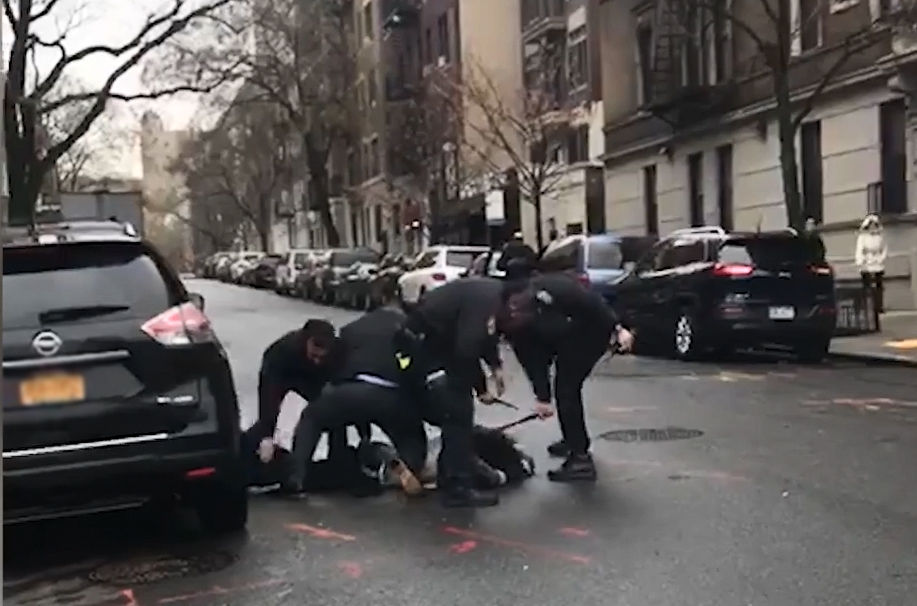 ‘FALSE NARRATIVE’: In a still from a cellphone video by a bystander, uniformed and plainclothes officers subdue one of two men later arrested for felony assault on a police officer, resisting arrest and other charges in Washington Heights Jan 8. In a separate video, one of the two men previously bragged that he has had similar confrontation with police, leading to lawsuits from which he profits.

The president of the Police Benevolent Association, Patrick J. Lynch, blamed “a lawless atmosphere” for a Jan. 8 incident in Washington Heights that led to two men being repeatedly hit by officers' batons before they were arrested.

The confrontation and its aftermath, at West 169th St. and Broadway near the West 168th St. subway station, where the two individuals, identified as Aaron Grissom and Sidney Williams, reportedly congregated, was caught on video by a bystander’s cellphone.

“Once again, we are seeing the consequences of lax policies that have allowed a lawless atmosphere to flourish in the subways, endangering both commuters and the cops who respond to protect them. Police officers had ejected the two individuals depicted in this video from the subway system due to complaints from transit riders,” Mr. Lynch said in a statement released Jan. 9.

In a separate cellphone video posted on Facebook that was unearthed by the PBA, a man identified by sources as Mr. Williams bragged about how he parlayed physical confrontations with police into cold cash.

“Every case I got, I beat,” the man, wearing a blue cap, silver chains and a black T-shirt, says in the video, which was recorded on Nostrand Ave. in Brooklyn, roughly 2 miles from Mr. Williams's Branton St. address.

Reciting a number of police precincts, he said: “Yeah, they know me. They don’t like me, but they can’t touch me. 'Cause they get hurt, and I get paid. I got three lawsuits, working on number four."

“These hands, these hands work,” he said, showing a fist to the camera.

In a statement, Mr. Lynch declared that an “anti-police atmosphere...generated by many in this city for political gain has created a cottage industry where mopes like [Mr. Williams] make money through the use of staged, videotaped events.”

The “false narrative” cultivated by video similar to that of this incident, he said, “generates outrage from elected officials and activists...causes DAs to drop the charge of assault of (an) officer which then sets the City up as a patsy for the false arrest suit.

"This is the kind of outrageous and offensive behavior that NYC police officers have to deal with routinely.”

The PBA leader cautioned that “all such video should be ignored” until investigations were concluded.

The confrontation is being investigated by the NYPD’s Internal Affairs Bureau.

In that video—which, according to a rough timeline provided by the NYPD, started about five minutes after police arrived at the scene and asked the two men to leave—two officers and the two men, both of them well-known to police, were in the west side of the intersection when one of the officers swung his baton at one of the men and appeared to strike him on the left side.

The other officer then struck the same man on the right side of his head, with the first officer again swinging his stick toward the man’s head. It was unclear if that swing connected.

The other man then chased after one of the officers, with the two ending up on the ground nearby next to a parked SUV. The video then showed the officers, joined by two plainclothes Detectives and an off-duty officer, vigorously hitting the man at least 20 times with their batons. One of the plainclothes officers was also seen kicking the man.

The two men, later identified by police as Mr. Grissom, 36, from the Bronx; and Mr. Williams, 37, from Brooklyn, were arrested and charged with felony assault on a police officer, resisting arrest, menacing, disorderly conduct and loitering, police said.

The two officers were taken to a local hospital for treatment of minor injuries and released, police said.

The Manhattan District Attorney’s Office deferred charges against one of the men and did not request bail for the other, actions Mr. Lynch called clueless. “The Manhattan DA’s office needs to wake up and realize that police officers cannot do our job when prosecutors won’t do theirs. Every perp who has ever thought about taking a swing at a cop is watching the outcome in this case,” he said in a Jan. 10 statement.

“The decision to seek charges against only 1 perp in Wash Hts subway arrest—& to seek no bail at all—puts safety of cops & public in jeopardy, & sends entirely wrong message to NYers. #NYPD is asking DAs to indict Grissom, charge Williams &, impose bail.”

“What the video doesn’t show is that these perps — one of whom has been previously arrested for assaulting a police officer — threw a haymaker at the cops once they got above ground, necessitating the use of force to bring them into custody,” Mr. Lynch said in his statement. “The predictable rush to judgment based on a partial video will once again obscure the larger issue: the chaos that our city’s leaders have decided to permit in the transit system is now bubbling up onto the streets.”

Asked about the incident during an unrelated press conference Jan. 9, Mayor de Blasio said he had seen the video and found some of it “really troubling.”

“If people are on the ground and yet there are still physical actions being taken—that concerns me,” he said. “So I want to get some answers and I want to quickly hear from the NYPD what their investigation yields.”

He did, however, say that it was his understanding that the two men “were creating a real problem for neighborhood residents.” Although he said he did not yet have all of the information concerning the incident, the Mayor added: “I want to emphasize any time an officer tells someone they are going to be put under arrest, it is the obligation of that individual to comply with the officer’s order and not resist.”

Police said the two have otherwise been the subject of “numerous complaints,” as have unspecified “disorderly conditions” in the subway station.

Michael Gonzalez told the New York Post that he witnessed the incident and that one of the cops had politely told Mr. Grissom and Mr. Williams that they couldn't loiter on the corner. "They gave the cops attitude," he said. "They started cursing, 'F--- you, get the f--- out of here.' They actually followed [the cop] and the two individuals actually lunged at the officers."

Mr. Gonzalez, who's a social worker, continued, "I pulled out my camera and you start seeing the cops being aggressive, when they were just defending themselves."

He made a video of that part of the confrontation, which he posted on his Instagram account, including commentary from his aunt, who was with him, saying in Spanish, "They flew at the police, those two troublemakers."