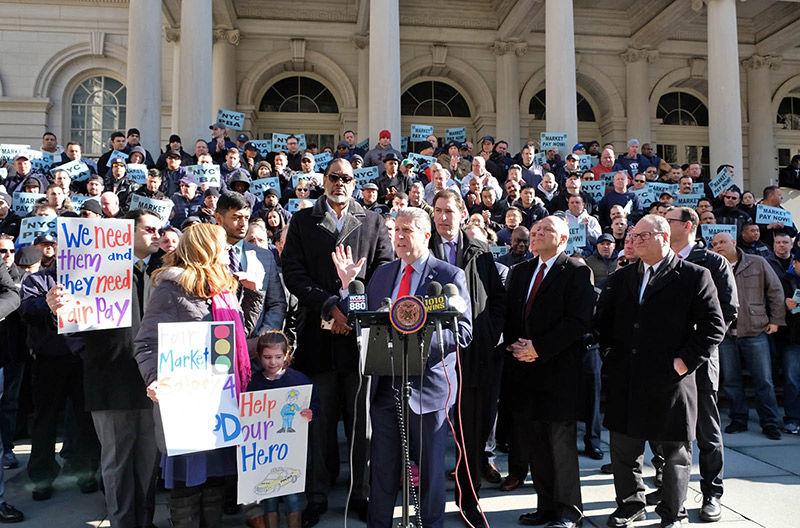 COPS HAVE COUNCIL’S EAR: A supermajority of City Council Members have signed letters advocating for better pay for NYPD officers. With arbitration on a new contract likely, the Police Benevolent Association has gone on the offensive, including by attending a March 19 rally on the steps of City Hall in support of ‘market-rate pay.’ Photo: The Chief-Leader/Michel Friang

Last month, nearly 300 police officers assembled on the steps of City Hall to, once again, make their case for better pay.

The rally coincided with the delivery of a letter to Mayor de Blasio, eventually signed by 37 members of the City Council, urging him to “do everything” in his power to get officers “market-rate pay.” Since that letter was made public, another five Council Members came out in support of salary increases for city cops.

That left eight Council Members, including Speaker Corey Johnson, who had not registered their support.

A few days after the March 19 rally, which was organized by Brooklyn Councilman Chaim Deutsch and featured Police Benevolent Association President Patrick J. Lynch emphatically backing the Council’s effort, the union said it would circulate posters to every precinct, transit district and housing police service area in the city, recommending that PBA members contact Council members who were signatories to the letter to thank them.

One Councilman who did not sign the letter, Antonio Reynoso, said that while he was in favor of fair pay for Police Officers, salary discussions needed to be part of a larger dialogue, including about reforms within the NYPD.

“There needs to be a comprehensive, overall conversation about what police work need to look like in New York City,” Mr. Reynoso, who represents parts of Brooklyn and Queens, said outside Council Chambers on March 27. “I just think the context by which the Council Members [who signed the letter] are talking about it is too narrow.”

Speaker Johnson, who also did not sign the letter, said that while he supports fair pay for Police Officers, the process needs to go through proper channels.

“We do need to look at paying our cops a fair wage to support themselves and their families, especially new cops who, when they come in, are not making much money at all,” he said during a March 28 press conference that addressed several topics.

“Upping pay would help cops across the board...But this is going to be something that is subject to negotiation between the PBA and the Mayor’s Office and the Office of Labor Relations.”

Lynch: On Wrong Side

Mr. Lynch, while saying it was gratifying for union members to have the support of the vast majority of the Council, was also pointed in his criticism of those who did not sign the letters.

“They can join Mayor de Blasio on the wrong side of this issue, out of step with their colleagues, and out of touch with the best interests of the New Yorkers who elected them,” he said in a statement.

Overtime and night differential can boost pay to more than $100,000. Still the PBA maintains that both starting salaries and maximums are inadequate, chiefly by citing the pay of State Police and the Port Authority, where maximum salaries reach $103,159 and $117,588, respectively.

Pay What We're Worth

"Once again, New York City is turning to its grossly underpaid police officers to help protect critical services and keep the city running,” he said in a statement. “It is time to pay NYC police officers a fair market rate of pay comparable to other local police departments while we professionally provide solutions to seemingly unsolvable problems.”

“The men and women need to be paid at a competitive rate” he said in answer to questions from committee members. “I don’t want to lose people to other police departments just because they’re not being paid enough.”