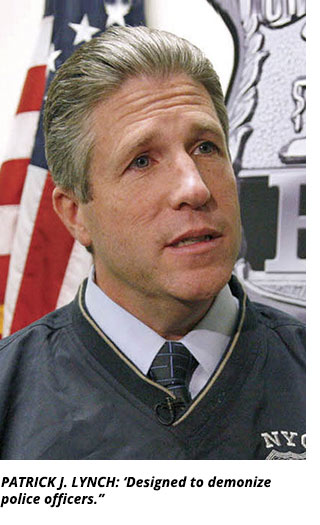 A package of bills, including one calling on state lawmakers to repeal a law that keeps the disciplinary records of police officers from public scrutiny, discussed at a joint hearing of City Council committees Jan. 7 drew an angry reaction from the Police Benevolent Association minutes after their passage.

The union, which opposes to a repeal or weakening of the records law—Civil Rights Law 50-a—called the committees’ action reckless. In a 10-page statement, PBA President Patrick J. Lynch said the package of measures was “designed to once again demonize police officers, seemingly for political gain.”

The call for the repeal of 50-a “ignored both the serious risks to police officer safety and the reputational harm of publishing false allegations,” the union leader said.

The law, on the books since 1976 but only enforced by the NYPD beginning three years ago, precludes the release of personnel records of police officers, firefighters, paramedics, and corrections and other peace officers, deeming them “confidential” and therefore free from inspection or review without written consent of the person in question.

The PBA maintains, and courts have agreed, that allowing police officers’ disciplinary records to become public, either as a matter of course or through the state’s Freedom of Information Law, could subject police officers to reprisal.

“The Council has simply ignored both the serious risks to police officer safety and the reputational harm of publishing false allegations—which will unfairly impact the careers of good police officers that keep all New Yorkers safe—in favor of purported ‘criminal justice reform,’” Mr. Lynch said in his statement.

Councilman Rory Lancman, the chair of the Justice System Committee, said at the hearing that repeal of 50-a was essential given, he said, that the law is being used “to conceal police misconduct from the public, the Council and our District Attorneys,” particularly when resisting-arrest and assault against police charges are levelled at suspects “in order to administer some notion of street justice.”

Mr. Lancman, a candidate for Queens District Attorney, also said the law is reinterpreted in the “most narrow way possible and its statutory exemptions ignored” impeding district attorneys, grand juries and government agencies that have lawful access to disciplinary records.

One of his bills, discussed at the hearing, would compel the quick release of reportable disciplinary records to district attorneys by the Police Department.

The NYPD’s executive director of legislative affairs, Oleg Chernyavsky, however, said the department objects to the legislation as it could compromise policing and “effectively micromanages the day-to-day and hour-by-hour operations of the department.”

Civil-rights advocates, including the New York Civil Liberties Union and the Legal Aid Society, both of which have challenged the law in court, maintain that 50-a shields officers from necessary oversight and impedes scrutiny of questionable police behavior.

The state Court of Appeals in December and a State Appellate Division panel in January, among them, have concluded that the law as written excludes the records from the requirements of state’s Freedom of Information Law.

But earlier this month, a three-person panel of law experts issued a report concluding that 50-a “keeps the public in the dark about police discipline, breeds mistrust, and reduces accountability.”

Following the report’s public release on Feb. 1, Commissioner O’Neill said a reform of 50-a was imperative, and that he and the department’s top brass “accept and fully embrace” all of the report’s recommendations.

“Our primary goal is to a have a disciplinary system that is fair, clear and consistent for all involved. And that’s essential to the police and the public alike,” he said during a press conference that afternoon. “As with everything trust is key here and it hinges on accountability and transparency.”

He said he would advocate for alterations in 50-a to satisfy those needs. “We need put out names, charges, documents and outcomes. This is all about building trust,” he said. But he emphasized that any changes in the law must be balanced with “the privacy rights and safety of our officers.”

He said the department’s objective was to ensure the disciplinary process’s fairness, consistency and timeliness.

NYPD First Deputy Commissioner Benjamin Tucker, who will head implementation of the report’s recommendations, said at the Council hearing that while transparency is necessary in building public trust, the safety of police officers remains paramount.

While the NYPD will continue to advocate for amendments to 50-a to allow for the public release of “significant public interest,” the Department does not support full repeal.

The law, he said at the Council hearing, “provides vital protections for police officers from harassment in court and possible threats to their personal safety,” which he called “very real.”

But Councilman Jumaane Williams said the law’s full repeal was necessary if the Department wants to cultivate residents’ trust.

“There is nothing more corrupt than power exercised in secret,” he said. The NYPD, he said, “operates with almost zero public consequences in cases of misconduct and abuse. You must demand transparency and accountability at all levels of government and that includes ensuring that those charged with protecting us are also answerable to us.”

Mayor de Blasio, too, has called for changes to 50-a.

“Central to that success are transparency and accountability in the relationship between our police officers and the communities they serve and protect. These thoughtful reform proposals represent meaningful progress in the never-ending mission to make our city safer and fairer,” he said in a statement issued after the report’s release.

In recent sessions, legislation that would have repealed the law failed to get the necessary support in Albany. But with Democrats now controlling both houses of the State Legislature, passage is considered more likely. It was reintroduced in both houses in January.