CityViews: City Must Choose Between Two Different Visions of Policing 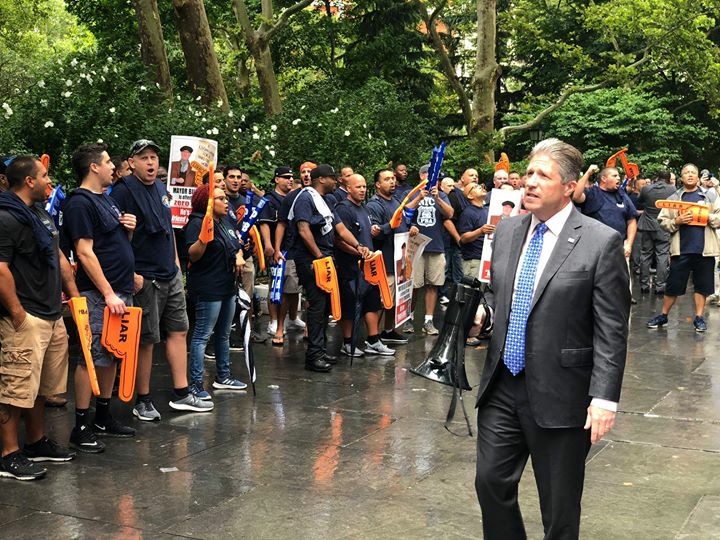 PBA head Patrick Lynch at a rally outside City Hall.

Crime in New York City remains at a record low, as it has been for most of the past two decades. That’s because police officers on the street are making incredible daily efforts to keep it that way. And yet, there are significant warning signs that could jeopardize the progress we have made. These warnings come in the form of two competing visions for the role police officers play in our city and society in general. If we do not take steps to close this divide, its damaging effects could be felt for generations.

The first of these two visions is the one that is shared by the majority of New Yorkers: a desire for police officers to proactively address crime and disorder. This is a vision our members hear about on patrol in our neighborhoods, when engaging with residents whose primary concern is a safe place in which to live, work, or send their children to school.

These regular New Yorkers are not looking at the monthly crime stats report to determine whether their public safety vision is succeeding. They are looking at the conditions on the streets in their communities. If they see an issue, they expect their police officers to address it immediately, before it becomes a press-conference-worthy problem.

There is a contrary vision, however, that does not reflect this view from the streets. This vision – pushed by a small but vocal group of activists – is a negative one, and focuses not on what New Yorkers expect their police officers to do, but rather on what they believe cops shouldn’t be doing.

The individuals promoting this narrative choose to look past the numerous and growing responsibilities police officers already carry out, and focus instead on imposing new burdens. Some of these burdens are a response to bad policies that police officers had no role in creating. Some are a reaction to one-off incidents that do not reflect their work as a whole. But, no matter the source, the activists’ recipe for a fairer criminal justice system is based on less policing, which they plan to achieve through short-sighted restrictions or punitive action against the women and men keeping our city safe.

Among these short-sighted reforms are a court-appointed monitor that severely limits officers’ ability to conduct basic duties. It also includes the Right to Know Act, which was passed by the City Council last year and discourages police officers from proactively addressing crime and disorder, as well as leading to frivolous complaints against officers. There have also been reforms, such as the mandated video recording of all routine street encounters, that endanger the ongoing efforts to foster increased engagement between officers and the community.

The negative vision of public safety is problematic for a number of reasons, including the fact that it has brought about disincentives to engage in smart, proactive policing, as well as new professional hazards that cops must navigate. The provision of basic police services, meanwhile, is left as an afterthought, at best. Our city’s leaders seem to believe that, as long as the major crime statistics remain low, there is no impact on cops’ ability to do their job effectively.

Unfortunately, these two visions have, in recent years, become ships passing in the night. While the positive vision largely has been overlooked, the negative vision has carried the day in City Hall and in Albany for the past half-decade, and it now informs how police officers view their job and how they make decisions on the street. It has created a culture of second–guessing and unnecessary distractions that have changed the very core of policing. The proactive policing that led to the historic achievements in reducing crime is virtually extinct.

There is, throughout all of these efforts at reform, a significant reality that is being ignored. From a police officer’s perspective at the most local level, it hasn’t changed the expectations of most New Yorkers about their own safety and quality of life. They take no comfort in the fact that major felonies are down a few percentage points citywide if one of the crimes that did occur happened on their own block. And they invariably want to know what their police officers are doing about it.

City and state officials can bow to the demands of advocates and decriminalize everything under the sun. They can continue to blatantly discourage any kind of proactive police work. But within our communities – in the real world – the 311 and 911 calls will keep rolling in. Police officers still need to handle these calls, and now we are doing it with a diminished set of enforcement tools and the knowledge that any proactive action is taken at their own professional peril.

Heading towards 2019, we need to begin addressing the real problems associated with these competing visions. Keeping a lid on major crimes is the bare minimum standard — police officers are the most visible face of city government, and New Yorkers in every neighborhood are expecting more and more of us every day. They want fairness in our criminal justice system — police officers want that, as well — but they aren’t interested in sacrificing their own safety or quality-of-life in order to achieve it.

We need New Yorkers who agree with a positive vision of public safety to understand that the current policies do not support that vision. And we need New Yorkers to speak up and make sure the leaders they voted for are responding to their concerns. Only then will we be able to keep our streets safer and ensure a brighter future for New York.