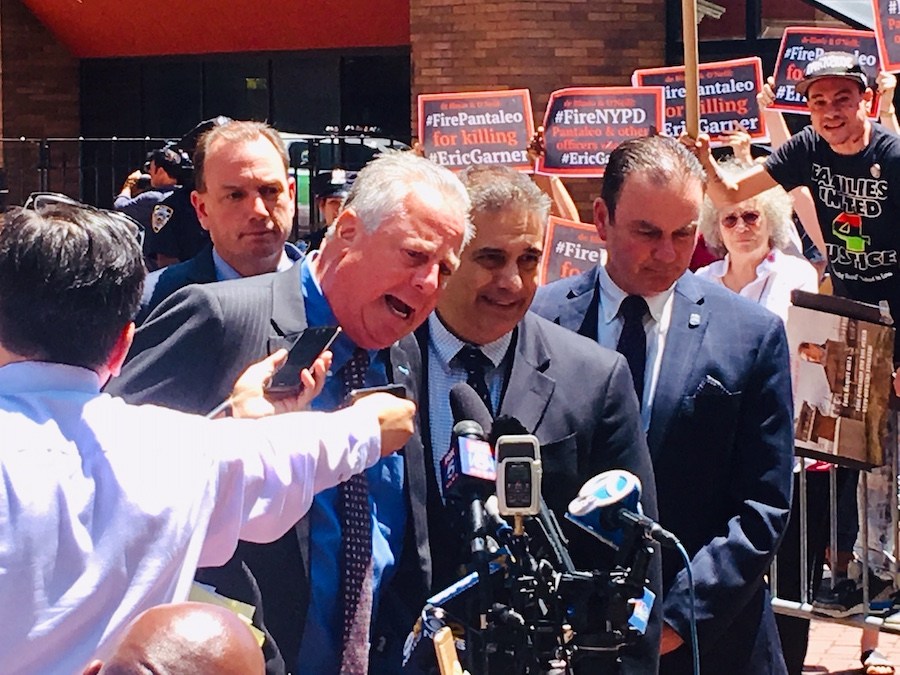 Defense attorney Stuart London issues a statement outside NYPD headquarters on Thursday after closing arguments in the administrative trial of Staten Island police officer Daniel Pantaleo. With no criminal charges on the table, Pantaleo could lose his badge if found to have killed Eric Garner with an illegal chokehold in 2014. (Photo by JOSH RUSSELL/Courthouse News Service)

Staten Island police officer Daniel Pantaleo, 33, was never charged criminally for Garner’s death on July 17, 2014, but has faced a long-delayed administrative trial this spring before the NYPD’s internal oversight board, the Civilian Complaint Review Board.

Charged with attempted reckless assault and strangulation, Pantaleo grappled with Garner in a struggle to arrest the 43-year-old for selling loose cigarettes outside the Staten Island Ferry, a misdemeanor tax offense.

Though a medical examiner found that Garner used a chokehold on Garner prohibited by NYPD police, Garner has maintained that he deployed a “rear take-down” technique that went awry due to Garner’s size and refusal to be handcuffed.

Before his death, which a bystander captured on video, Garner stood 6-foot-3 and weighed 350 pounds.

Defense attorney Stuart London focused much of his closing argument today on shifting blame away from Pantaleo, insisting that Garner’s health conditions made him a “ticking time bomb.”

“He was huge, he was sweaty and he was out of shape,” London said. “If Eric Garner had merely accepted his summons we wouldn’t be here today.”

“Whether it was his heart or his lungs, it wasn’t his neck,” London said in his closing argument.

While Persechino testified earlier in the trial that a chokehold and chest compression were the start of a “lethal cascade” of medical events that led to Garner’s death, Graham averred that Garner died from heart disease exacerbated the physical exertion of resisting arrest.

Prosecutor O’Hare remarked in her closing today that Graham had not reviewed any investigative findings before taking the stand. Noting that Pantaleo’s defense paid the doctor to push an agenda, she said his testimony should ignored as biased.

Referencing the cellphone video of Garner’s arrest shown dozens of times throughout the trial, O’Hare said that the first signs of any impairment to Garner’s health occurred after Pantaleo put his hands on Garner.

O’Hare ended her arguments on a still frame from the video where Pantaleo’s hand and arm are seen pressed against Garnet’s neck and throat while he’s on the ground.

Pantaleo could be fired without his pension officer depending on the decision of Rosemarie Maldonado, the CCRB’s deputy commissioner for trials. Maldonado will issue a recommendation in the case to New York City Police Commissioner James O’Neill, who will ultimately decide how and whether to punish Pantaleo.

The officer’s trial consisted of seven hearings scattered across a 25-day timeframe, with a full two-week break in the middle.

Declining to testify in his own defense Wednesday, Pantaleo cited a five-year statute of limitations for filing federal civil rights charges that won’t expire until July.

In the place of the officer’s testimony, Pantaleo’s attorneys submitted a GO-15 interview statement that Pantaleo produced for the Internal Affairs Bureau investigation of Garner’s killing.

Should the NYPD apply a broad reading of Section 50-a of the state Civil Rights Law, it is possible that Maldonado’s findings of misconduct will never be publicly disclosed. The law says all “personnel records used to evaluate performance towards continued employment or promotion” for police officers, firefighters and correction officers are “confidential and not subject to inspection or review” except by court order.

A 2018 report by New York State’s Committee on Open Government founds that courts’ interpretation of 50-a “deprives the public of information essential to democratic oversight and lends a counter-productive shield of opacity to the state and local police agencies.” Earlier this year, New York State Assemblyman Daniel O’Donnell proposed a full repeal of Section 50-A, claiming that the law had been misinterpreted and was blocking the public’s access to important government, particularly through the state’s Freedom of Information Law process.

The NYPD’s union, the Police Benevolent Association, which bankrolled Pantaleo’s defense and has been present throughout the CCRB trial in support of Pantaleo, would likely publicize any findings that clear Pantaleo of the charges of misconduct.

Following the close of the trial on Thursday, PBA President Patrick J. Lynch attempted to speak to reporters outside police headquarters but was expectedly drowned out by booing and chants from protesters.

In a statement released later that afternoon, Lynch accused anti-police activists of damaging the partnership between police officers and their communities by exploiting Garner’s death and stoking the fires of outrage to further their own political agenda.

“From the moment this incident occurred, the facts have been twisted to smear the reputation of not only P.O. Daniel Pantaleo, but every New York City police officer,” Lynch said in a statement. “In this trial, the facts have been allowed to speak for themselves. If the decision is made on those facts alone — without the pressure of politics and the noise from the street — Pantaleo should be cleared of all charges.”

Eric Garner’s mother, Gwen Carr, sat in the front row of the courtroom every day of the trial and addressed a crowd of rapt supporters Thursday afternoon.

“The trial is over today but we are going to continue,” she said. “We’re not letting this die. We’ll be out on the street, we are going to be doing press conferences. We are going to keep my son’s name and memory and legacy alive.

“If they think that we are going away, they are badly mistaken. We are here. They’re gonna see me – I’m gonna be up in their face, I’m gonna be up in Albany, I’ll be over here at City Hall, I’ll be everywhere,” Carr declared to cheers from members of activist groups including Black Lives Matter, Communities United for Police Reform, and Al Sharpton’s National Action Network.