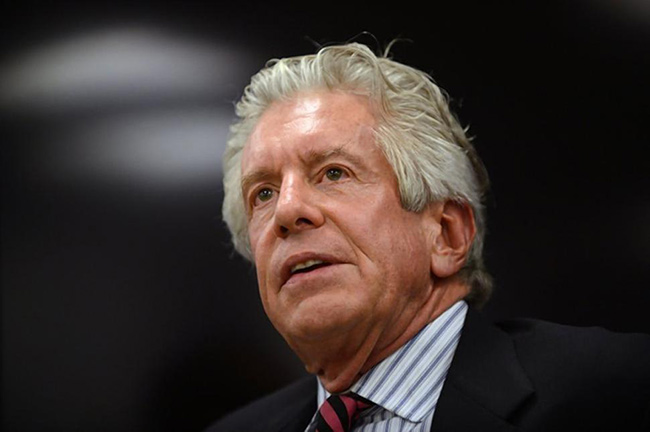 Richard Emery, the chairman of the Civilian Complaint Review Board, has come under fire after he called the cop union pigs. SUSAN WATTS

The Patrolmen’s Benevolent Association will call for the firing of beleaguered Civilian Complaint Review Board Chairman Richard Emery with a new TV ad, the Daily News has learned.

The 30-second ad, slated to air on Tuesday and run through March 14, reiterates pleas from the Sergeants Benevolent Association and PBA for Mayor de Blasio to oust Emery — and uses the NYPD watchdog chairman’s own words against him.

“We call them cops, police officers, New York’s Finest, but this is what Richard Emery, the chairman of the CCRB, calls them,” the commercial begins, before displaying the Daily News’ front page with the headline reading: “Blaz big calls cop union ‘pigs.’”

“Emery is supposed to handle civilian complaints fairly and independently, but his law firm is seeking fees for those very same cases,” the ad continues. “And he calls cops ‘pigs?’”

Emery came under fire last month when The News revealed his law firm had been retained by Stefon Luckey, a Queens man suing an NYPD sergeant and a cop cited by the CCRB for misconduct.

Soon after The News’s report, police union leaders publicly urged the mayor to give Emery the boot.

Emery later likened the calls for his removal to the union heads “squealing like a stuck pig,” — invoking a pejorative term for police officer.

“I’m not going to deprive the public and people who are abused by police officers of having access to excellent lawyers because some union is squealing like a stuck pig.” 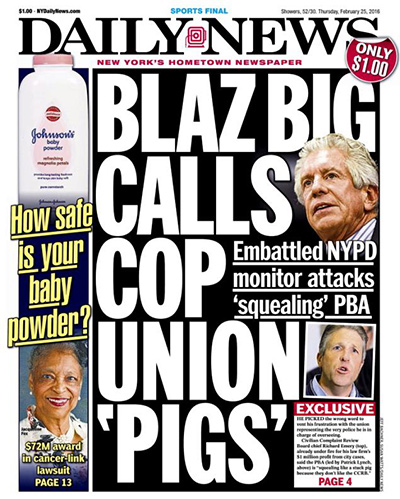 Front page of the New York Daily News for Thursday is about Richard Emery and Patrick Lynch in a war of words: BLAZ BIG CALLS COP UNION "PIGS"

On Sunday, Emery sought to distance himself from the epithet.

“Never ever in my life have I called any police officer, whose job I respect and admire, that term,” he told The News.

“My law firm has never — and is not now — benefiting from any CCRB case, or even handling any CCRB case that occurred while I was chair,” he said, adding, “I’ve fully and carefully complied with the requirements that were set forth when I took the position.”

“Chairman Emery has already apologized for his unfortunate language and the law firm involved has made clear it will not represent any client who files a claim that is substantiated by the CCRB during the time Mr. Emery remains its Chair,” she said.