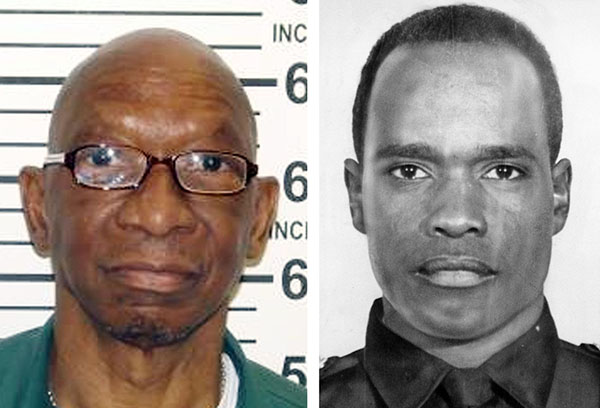 Robert Hayes (l.) was granted release on June 12th. He was convicted in 1974 of shooting and killing NYPD Transit Officer Sidney Thompson (r.) in 1973. (DOCC/NYPD)

A convicted cop killer who has spent the past 44 years in prison has been granted parole, state prisons officials said.

Robert Hayes, 69, was granted release on June 12 by the Board of Parole. Hayes was convicted in 1974 of shooting and killing transit cop Sidney Thompson in 1973.

Thompson was trying to arrest a friend of Hayes for jumping a turnstile. Both Hayes and his friend were members of the Black Liberation Army.

Hayes’ impending discharge, which could come as soon as Sunday, follows the release in April of another convicted cop killer, Herman Bell, who was convicted in the 1971 shooting deaths of NYPD officers Waverly Jones and Joseph Piagentini.

Hayes was denied parole 10 times before the board finally approved his release.

“The Board adheres to statutory requirements that take into consideration a number of factors prior to making any final determination,” a state prisons spokesman said in a statement.

“The Board must consider statements made by victims and victims’ families, as well as an individual’s criminal history, institutional accomplishments, potential to successfully reintegrate into the community, and perceived danger to public safety.”

The board’s vote was quickly criticized by law enforcement unions. “It is a travesty that yet another murderer who killed a member of law enforcement in cold blood will be turned loose on the streets to reintegrate with the public, whom his victim gave his life to protect,” said Michael Powers, president of the New York State Correctional Officers and Police Benevolent Associated.

“If Gov. Cuomo truly is serious about criminal justice reform, he must start by fixing a broken parole system that would allow such a sinister killer to go free.”

Powers also slammed an executive order Gov. Cuomo issued in April that gave parolees the right to vote. “Forcing citizens to be vigilant that convicted killers may be in their polling place makes a mockery our democratic process,” he said.

Cuomo spokesman Richard Azzopardi said the governor disagrees with the parole board.

“Our law enforcement officers and first responders have dedicated their lives to keeping their communities safe and anyone who murders one of these heroes should remain locked away,” he said. “This is an independent board, but we disagree with this decision in the strongest possible terms.”