By ROCCO PARASCANDOLA and GRAHAM RAYMAN 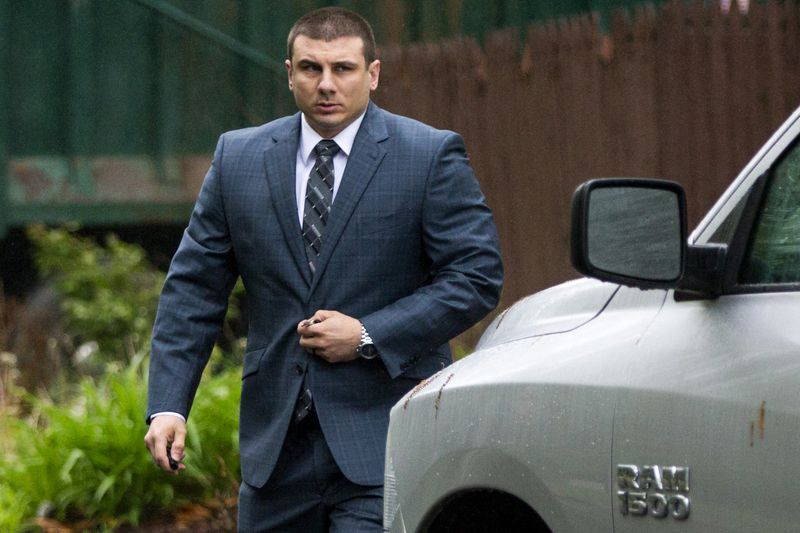 Lawyers battling over whether an NYPD officer should be fired for putting Eric Garner in a fatal chokehold argued Monday that Garner’s last words help prove their cases.

“Every time you see me, you want to mess with me. I’m tired of it. This stops today. I’m done," lawyer Stuart London quoted Garner saying to officers confronting him for selling loose cigarettes.

“These words, your honor, constitute the beginning of his efforts to resist arrest," London argued to NYPD Trials Commissioner Rosemary Maldonado during the first day of a proceeding on whether Officer Daniel Pantaleo should be dismissed for violating NYPD rules by putting Garner in a chokehold.

Garner’s arrest and death on Staten Island on July 17, 2014 was captured in a chilling cellphone video that fueled a raging national debate about the use of excessive force by police with minority groups, particularly black men. “I can’t breathe!” Garner pleaded 11 times in the moments before he died.

London argued that Pantaleo used reasonable force to take down and arrest Garner. In his telling, the officer followed NYPD-approved training by putting his hands on Garner’s face as he forced him to the ground. “The expression goes, control the head, control the body," London said.

Also, London said, Garner’s takedown prevented him from crashing through a store window. “He saved both his life and Mr. Garner’s life by taking him to the ground," London declared.

A lawyer making the case for Pantaleo’s firing used other words of Garner’s to argue that the officer should lose his job for using excessive force.

“Eric Garner pleads for air and he’s ignored. Instead of giving him aid, Officer Daniel Pantaleo buries this helpless man’s head in the pavement, pushes his face into the ground, indifferent to his cries for help,” Fogel said in his opening statement.

"He gave the victim a death sentence over loose cigarettes,” Fogel said. “He applied pressure to his neck, and he did not let go.”

Pantaleo and Officer Justin Damico accused Garner of selling “loosies.” Garner denied he was selling the loose cigarettes found on him.

The disturbing video was taken by Garner’s friend Ramsey Orta and published by the Daily News.

When it was shown at Pantaleo’s trial Monday, Orta offered details via a video link from an upstate prison where he is serving four years for gun possession, menacing, drug possession and sales and possession of stolen property.

Lawyers for the Civilian Complaint Review Board, which is prosecuting Pantaleo, slowly went through the video, pausing it at times so Orta could explain what was happening. Orta buried his head in his hands.

As the images played, Garner’s mother, Gwen Carr, left the courtroom with some supporters. She returned a short time later, but then left again with Ellisha Garner, a sister of Eric, after Ellisha broke down, sobbing and wailing as “I can’t breathe” was heard again and again. The Rev. Al Sharpton accompanied the distraught women.

Carr wants Pantaleo fired, and Sgt. Kizzy Adonis, who responded to the scene after the takedown, tried for her role in the encounter.

Adonis was charged by the NYPD with failure to supervise and has yet to have her department trial. Carr also wants the other officers who responded to be disciplined for failing to intervene.The city medical examiner concluded Garner, who was 6-foot-2 and 395 pounds, died from “compression of neck (choke hold), compression of chest and prone positioning during physical restraint by police," and that Garner’s weight, asthma and cardiovascular disease were contributing factors.

London noted Garner’s poor health, but Fogel said without the chokehold Garner would not have had the asthmatic attack to sent him into cardiac arrest.

A Staten Island grand jury more than four years ago voted not to indict Pantaleo. A civil rights investigation by the U.S. Department of Justice has been open for four years. The agency has until July 17 to announce its findings. The city settled a lawsuit by the Garner family for $5.9 million.