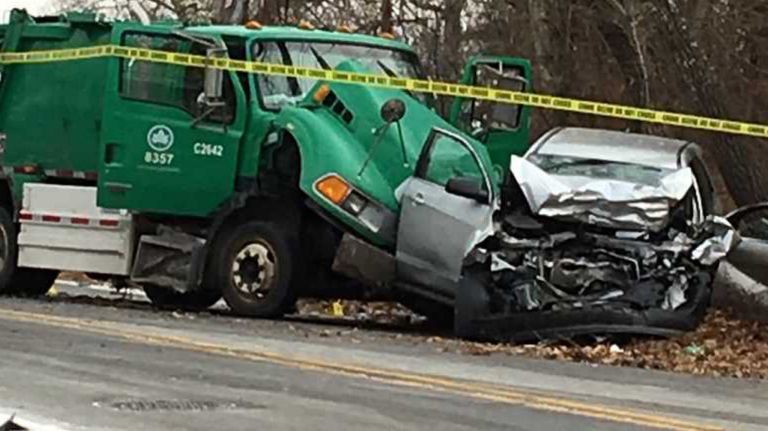 An off-duty rookie NYPD officer was killed early Wednesday when his car collided head-on with a small city truck as he was driving to his home in Westchester County, officials said.

Officer Brian Kessler, 28, was pronounced dead at Jacobi Medical Center after his 2013 Chevy Equinox collided with a Department of Parks and Recreation refuse collection vehicle by 870 Shore Rd. in the Pelham Bay Park section of the Bronx, officials said.

According to NYPD Assistant Chief Larry Nikunen, commander of patrol borough Bronx, Kessler was driving north when the collision occurred about 8:20 a.m. FDNY and NYPD units responded, removing Kessler from the vehicle. The injured officer was rushed to the hospital as medics attempted CPR, Nikunen said. Kessler was pronounced dead about 9:15 a.m., he said.

Two Parks Department employees were slightly injured in the accident and where treated at Jacobi as well, according to Nikunen.
Reporters who visited the accident site said that Kessler’s vehicle suffered extensive front-end damage. The parks department vehicle also had damage.

Officials said Kessler, who became a cop in April 2018, was usually assigned to a public housing police area in the Bronx but on Wednesday had done a daily work tour at NYPD headquarters in lower Manhattan. A resident of New Rochelle, Kessler was probably taking the Shore Road route as a faster way to get home, one official said.

In a statement, Patrolmen’s Benevolent Association president Patrick Lynch offered condolences to Kessler’s family as well as his fiancee, who wasn’t identified.

“We are deeply saddened at the loss of our brother Police Officer Brian Kessler in this tragic accident. Our thoughts and prayers are with the Kessler family, his fiancee and all his NYPD colleagues, particularly those at PSA 8," Lynch said in the statement.