RAILS: How the NYPD keeps tabs on cops

The system is supercharged with information - some negative and some positive - about individual officers that is available at the touch of a computer key. 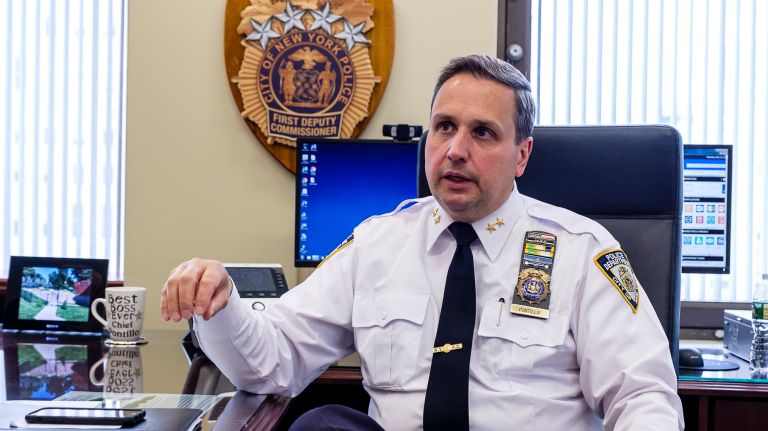 The NYPD is expanding an extensive electronic database to keep tabs on its officers, giving the department real-time feedback about how cops are performing.

Known as RAILS — short for “Risk Assessment Information Liability System” — the system acts as what one police commander called an online personnel file providing commanders with crucial information on how officers respond in a variety of actions in which they are involved.

The system is supercharged with information — some negative and some positive — about individual officers that is available at the touch of a computer key. It allows NYPD leadership to determine what training or special attention officers may need to do a better job, said Deputy Chief John Cosgrove, who oversees the program.

Cosgrove said the system, which has been strongly criticized by the officers’ union, not only provided commanders with complaints or rule violations but also their arrest and assignment history, where they had worked, and the number of commendations and disciplinary actions they had.

Assistant Chief Matthew Pontillo compared RAILS with a car “dashboard” that gives commanders an instantaneous look at an officer’s performance.

NYPD officials said the system was constantly evolving and would likely to continue to do so for at least the next two years. As recently as April, it began recording when the NYPD would not indemnify officers who incurred legal costs when the department is sued because of their actions. By the end of the year, the NYPD expects to record in RAILS lawsuits where officers were found at fault due to their conduct.

Cosgrove said implementation of RAILS took off after 2014 following a settlement over the department’s stop-and-frisk policy. The NYPD was sued over excess use of stop and frisk, which U.S. District Judge Shira Scheindlin ruled had been done in a racially discriminatory manner under the leadership of former NYPD Commissioner Ray Kelly. Under an agreement, the court appointed a monitor and ordered the NYPD — the largest police department in the country with more than 36,000 members — to come up with new policies and procedures. By October 2017, the RAILS system was fully operational, attorney Peter Zimroth, the court-appointed monitor, said in his most recent report.

In RAILS, several criteria are put into an officer’s file, including excessive Civilian Complaint Review Board complaints, non-defined excessive litigation, adverse credibility findings by a judge or prosecutor and the number of times prosecutors decline to prosecute an arrest made by an officer. Also tallied in RAILS are illegal stops made by an officer and settlements of lawsuits where city lawyers think officers acted improperly.

Of the major police departments in the country, Pontillo said Los Angeles was using a similar concept of RAILS and Chicago was exploring use of its own system to monitor risky police behavior.

Back in New York City, RAILS has supporters as well as critics.

“I have been an advocate of these things for years for a number of reasons, to identify good and bad performance,” said Professor Jon Shain, who specializes in police policy and practice at John Jay College of Criminal Justice.

Supporters of RAILS maintain it is an advance for modern policing that can make the NYPD more efficient.

“This is a tool I wish I could have had,” said Cosgrove, recalling his days as a local commander.

In the past, the department relied mostly on a cumbersome, manual paper system of reports, Pontillo said. With RAILS, he said commanders have the information at their fingertips.

Critics say RAILS represents a Big Brother-like system designed to accentuate the negative, to intimidate officers and sweep up data that can been used to penalize them.

“The expansion of the RAILS system is the result of an oversight regime run amok,” said PBA President Patrick Lynch in a statement to Newsday. “The Federal Monitor’s mandate was to address issues related to the NYPD’s stop, question and frisk policies. Stops have fallen to record lows, and yet New York City taxpayers are still shelling out hundreds of thousands of dollars each year to court-appointed scrutinizers.”

PBA officials argue the court overstepped its bounds by encouraging the development of RAILS at a time when the original stop-and-frisk problems at the root of the lawsuit have disappeared. In 2011, the NYPD carried out nearly 700,000 stops, largely in communities of color, which stoked the federal lawsuit. But by 2018, stops had fallen to a reported 11,000, a drop of over 98 percent since the all-time high eight years ago.

Lynch argues that the resolution of the original stop-and-frisk issue undercuts the need for RAILS.

“The expanded RAILS system will sweep up data that has nothing to do with street stops and has little value as a performance indicator,” said Lynch

By looking at ambiguous criteria like credibility findings and declined prosecutions, the NYPD is examining information that doesn’t prove misconduct by officers, said another union official who didn’t want to be named.

Shain said the RAILS system could become an issue of collective bargaining between the NYPD and the police union, particularly if information in the system was used for discipline and could affect work standards.

One controversial piece of data pulled into RAILS as of April 1 is complicated to analyze. It involves “adverse credibility findings” reported by prosecutors. At one extreme are officers suspected of perjury. But at times an officer may have problems as a witness for a number of reasons unrelated to perjury, police commanders note.

“Some people are not good at testifying,” said Pontillo. Other officers also don’t prepare properly before they go to court, something that requires retraining, he added.

Lawsuit filings are also collected and analyzed in RAILS. The department is using the system to study trends and develop training programs based on those trends, said Philip Eure, inspector general of the NYPD, in a recent report on litigation.

While arrests are down, local district attorneys still throw out thousands of cases each year and the reasons are reported in RAILS. City district attorneys declined to prosecute nearly 13,000 arrests in 2018, with the Bronx leading the way with 5,585, according to NYPD records.

“Historically [declined prosecutions] are lower than they have ever been,” said Cosgrove.

But low numbers still spell problems for officers and may make them reluctant to do their jobs, Lynch said.

“The only sure way for cops to avoid triggering a false ‘red flag’ in RAILS would be to avoid taking enforcement action, whenever possible,” Lynch contended.

Yet Shain believes that NYPD management is doing the right thing to track indicators such as lawsuits and adverse credibility findings.

“Management has the right to monitor its employees,” Shain said.