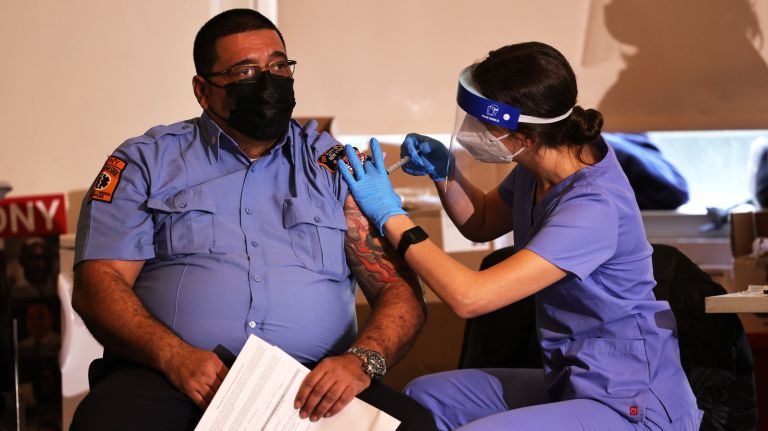 NYPD cops who were expecting to be offered COVID-19 vaccinations Tuesday were told they have to wait a bit longer as officials began inoculating city firefighters.

NYPD union officials said they had expected to have the vaccination offered to cops Tuesday and Wednesday but that had been canceled by the department. No firm future date has been set, a department spokesman said.

Instead, hundreds of members of the FDNY began receiving the vaccine at department headquarters in Brooklyn, Randalls Island and Fort Totten, said Andrew Ansbro, head of the FDNY-Firefighters Association.

De Blasio said he was waiting for state guidance before police officers began receiving the vaccinations.

"As soon as it is [clarified] we will get that effort underway," said de Blasio, who didn’t explain why the widely anticipated date of Dec. 29 for cop vaccines didn’t materialize.

Dr. David Chokshi, the city’s health commissioner, also indicated that after health care workers and nursing home residents and staffers were vaccinated this week, first responders would be among those getting shots next week.

Ansbro said firefighters are being given the shots because they are considered among the first responders most likely to have contact with stricken patients, along with EMT personnel, who were vaccinated earlier this month. An FDNY official didn’t return a call for comment.

NYPD Commissioner Dermot Shea, at a news briefing Tuesday, stressed that for now he wouldn’t order officers to get vaccinated.

Police Benevolent Association president Patrick Lynch said in a statement that "bureaucratic gymnastics" by politicians in Albany and City Hall were behind the delay in cops getting the vaccine.

Paul DiGiacomo, head of the Detectives Endowment Association, said his union lost six members to COVID-19 and he viewed the delay in rolling out the vaccine to cops as another example of government not supporting police.

During the spring, the NYPD saw nearly 20% of cops reporting sick with COVID-relatated issues. Eight cops and 40 civilian employees of the NYPD died from the virus, according to department records.