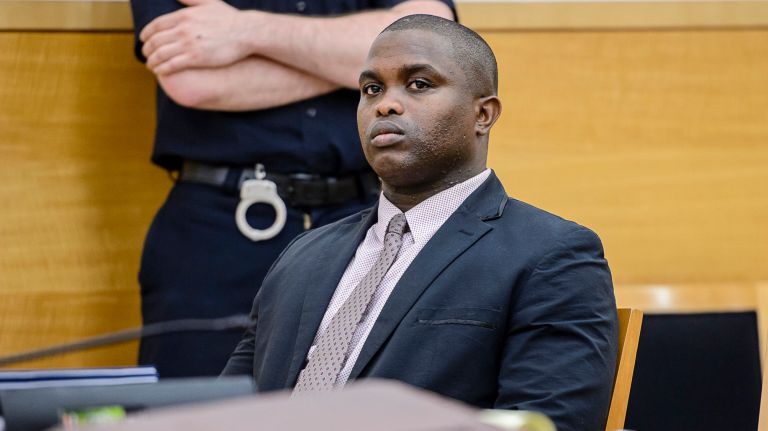 NYPD Officer Wayne Isaacs in 2017 in Brooklyn Supreme Court where he was later found not guilty in the fatal shooting of Delrawn Small. Credit: Jeff Bachner

The Civilian Complaint Review Board is recommending an NYPD cop acquitted in the off-duty shooting death of an unarmed Brooklyn man face misconduct charges for the 2016 killing, chairman Fred Davie said Tuesday night.

"We are glad this case is moving forward, and I am hopeful the Deputy Commissioner of Trials’ office and Police Commissioner will concur with the CCRB’s findings following our prosecution of this case," Davie said in a statement.

In 2017, then-New York Attorney General Eric Schneiderman charged Officer Wayne Isaacs with murder and manslaughter for the killing of Delrawn Small, 37. The case was the first that Schneiderman prosecuted under Gov. Andrew M. Cuomo's executive order empowering the attorney general to take over cases in which a law enforcement officer kills an unarmed civilian.

The officer was accused of the July 4, 2016 fatal shooting of Small after the men got into a fight while stopped at a red light in Brooklyn. Isaacs, 37 at the time, reportedly testified that Small threatened his life and punched him at the stoplight. Video evidence later submitted at trial showed Small getting out of his car at the light and walking over to the driver side of Isaacs' vehicle. Small is then seen abruptly falling down to the pavement.

NYPD Commissioner Dermot Shea said in a statement Tuesday night: "The NYPD will cooperate with the CCRB in every way."

If Isaacs is charged with misconduct, the case would be tried in the NYPD trial room before a department trial judge. The judge would render a decision and recommend punishment if the officer is found liable. The police commissioner would decide punishment.

In a statement, Police Benevolent Association president Patrick Lynch said the CCRB decision was an "attempt to take a third bite at the apple" and had "nothing to do with justice."

Lynch said: "Police officer Isaacs has already been acquitted by a jury of his peers and cleared by the NYPD force investigation division. … We’re confident that another impartial review of the facts will clear him once again."

The last high profile CCRB case brought to trial against an officer under similar circumstances involved Officer Daniel Pantaleo, who was seen on video using an apparent chokehold on Eric Garner on Staten Island in July 2014. Garner died but a Staten Island grand jury declined to indict Pantaleo. The U.S. Department of Justice also declined to charge Pantaleo.

The CCRB brought administrative charges against Pantaleo for using a banned chokehold in Garner’s death and an NYPD administrative judge recommended in early August 2019 that he be fired. Then-Commissioner James O’Neill fired Pantaleo later that month.