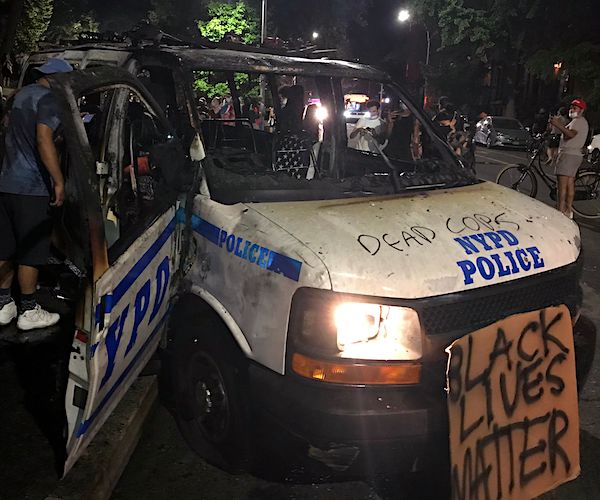 In a meeting at his private club in Bedminister, N.J., Trump was joined by dozens of Police Benevolent Association members as he delivered a dystopian view of America if Joe Biden is elected in November.

"This guy has been taking your dignity away and your respect," Trump said of Biden. "And I'm telling you on Nov. 3 you're going to be getting it back."

"My agenda is anti-crime and pro-cop all the way, and that's what it's got to be," Trump declared, The Hill reported.

PBA president Patrick Lynch lamented a "false narrative" the city's law enforcement officers are "evil" and praised Trump for what he called a willingness to "speak the truth" and give his support to police.

"I cannot remember when we've ever endorsed for the office of president of the United States, until now. That's how important this is," Lynch said, The Hill reported.

Trump appears to be taking a page out of Richard Nixon's law-and-order campaign playbook from 1968 — when American streets were rife with racial protests and Nixon campaigned vowing to crack down and restore order to appeal to white voters.

Trump's campaign has aired advertising in battleground states showing a woman calling police for help as an intruder breaks into her home and getting a voice recording informing her that, because the police have been defunded, no one is available to take her call.

Trump has also tweeted warnings to "Suburban Housewives" that Biden will shatter their communities by requiring communities to build lower income housing as part of new development. Trump recently revoked an Obama-era housing regulation designed to eliminate racial disparities in the suburbs.

Trump told the crowd he hoped to make a play to win New York on the strength of his "law and order" platform. Trump lost the state by nearly 2 million votes in 2016, and no Republican has won the state since Ronald Reagan in 1984, The Hill noted.

The Associated Press contributed to this report.