Cop leaves hospital one year after being dragged by stolen car 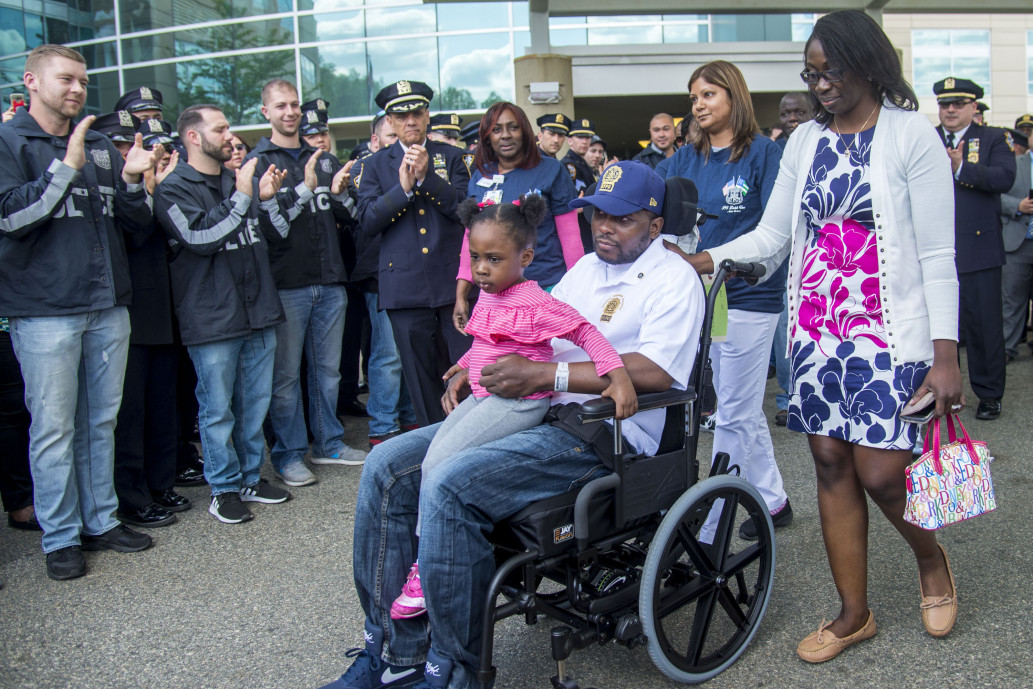 Dalsh Veve with his daughter, Darshee, and his wife, Esther. (Richard Harbus)

The NYPD officer who was run over by a gang member and dragged for three blocks was released from the hospital on Monday — nearly a year later.

Hundreds of officers gave Detective Dalsh Veve a hero’s welcome as he left the Kessler Institute for Rehabilitation in West Orange, NJ, around 2:30 p.m. Monday.

Veve’s 3-year-old daughter, Darshee, sat on his lap and wife Esther kept her hand on his shoulder as he emerged in a wheelchair and was placed into a van.

“This is an important day. This is a positive day in Dalsh’s progress,” said NYPD Commissioner James O’Neill. “His wife, she said from Day 1 this day was going to come. I’m not sure we all believed, but we know she did.”

Veve did not speak but a faint smile crossed his lips as he was moved toward the van for the ride hometo Long Island to continue his recovery.

“He’s whispering, he just gave us a thumbs-up,” O’Neill said.

Veve was investigating gunshots in East Flatbush, Brooklyn, on June 3, 2017, when teenage gang member Justin Murrell allegedly hit him with a stolen car, dragging the cop three blocks before Veve fired two shots, hitting Murrell in the mouth and getting him to stop the car.

Murrell was arrested and charged with attempted murder. He pleaded not guilty at arraignment and his next court appearance is June 20.

Veve was so badly hurt that he could not recognize his own wife and child until January.