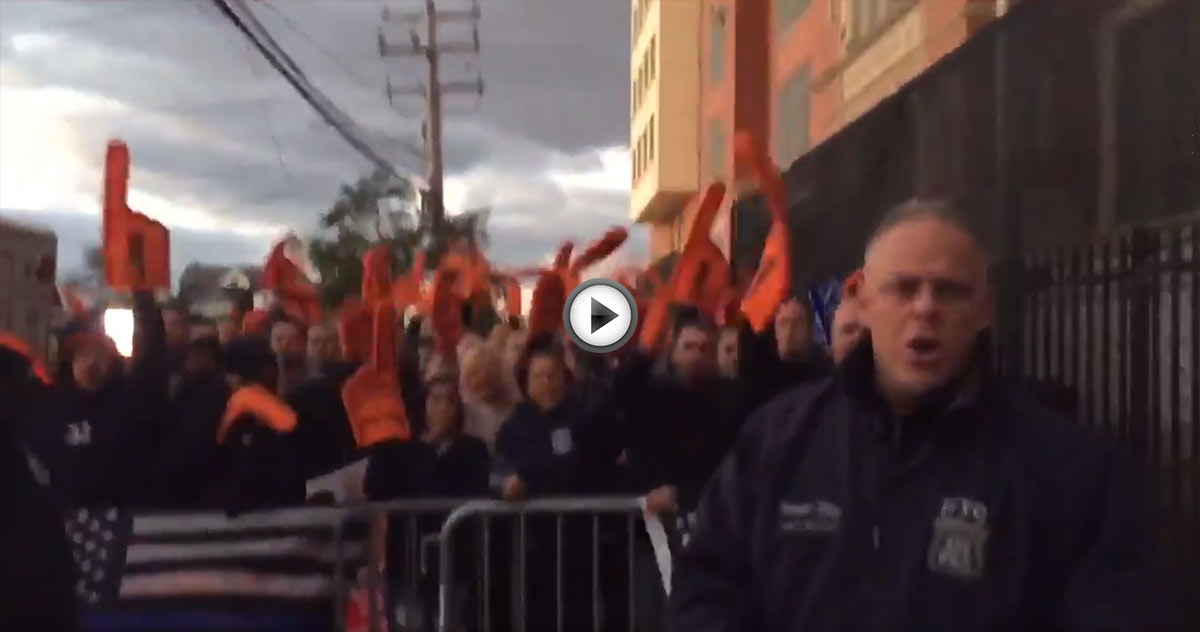 NYCMayor earned a new nickname tonight from @NYCPBA of "Back Door Billy." Here is video of him sneaking in back door at PS 42 in The Rockaways for town hall meeting as cops chant "Shame on you!" Cops were there to protest his failure to give them new union contract. pic.twitter.com/ONtEn1ShMV — Rich Calder (@Rich_Calder) October 24, 2018

Mayor de Blasio snuck in the back entrance of a Queens public school Wednesday night, avoiding hundreds of angry members of the NYPD’s largest police union who were there to protest a contract dispute.

For more than an hour, cops gathered outside the front entrance of PS 42 in The Rockaways – where de Blasio was slated to host a town hall meeting with residents — to protest that the Patrolmen’s Benevolent Association has been without a contract since July 2017.

However, most cops quickly skirted towards the back entrance once they realized de Blasio was heading that way.

Fenced in by police barricades, they booed and repeatedly chanted from about 100 feet away: “shame on you!” “coward!” and “Back Door Billy!”

PBA President Pat Lynch said a pipe-bomb scare at CNN’s Manhattan offices only hours earlier showed just how important cops are to the city and demanded Hizzoner return to the negotiating table.

“Everyone dialed 911 and called us – except the mayor refuses to recognize that,” he said.

“We’re the ones that make the city safe, that put ourselves at risk.”

He added that Hizzoner “ tends to sneak in the back because he does not want to face New York City police officers.”

Despite being ripped by the union, de Blasio was nothing but complementary to cops while addressing the earlier bomb scare to the roughly 200 residents who attended the town hall session.

“We have the finest police force in our country defending us,” said de Blasio.

He also said he’s very confident that the NYPD will get those response for what he called an attempted “terror attack.”

“I don’t know how anyone thinks they will get away with this because they will be found,” Hizzoner said.