By Tina Moore and Ruth Brown

The disciplinary records of hundreds of NYPD cops and staffers were published online Monday, revealing infractions by some well-known names alongside the eyebrow-raising actions of rank-and-file officers. 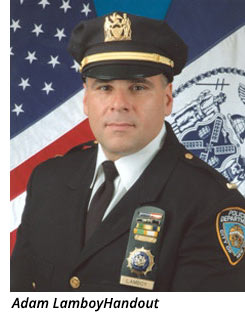 The website Buzzfeed released the leaked records relating to around 1,800 NYPD workers from between 2011 and 2015, citing “an overwhelming public interest” in the files.

Among those listed in the documents is Adam Lamboy, one of the two cops accused of going to Seattle for a sleepover with a sex-crimes victim in 2013.

The records show he’s also a time-sheet cheat, falsifying documents to get paid for 76 hours of overtime he didn’t work, spending four days worth of time “conducting personal business” when he was supposed to be working and using his department vehicle for personal use 32 times.

He was ordered to retire for his various transgressions, the records show.

Officer Daniel Pantaleo — the “chokehold” cop in the 2014 death of Staten Island man Eric Garner — is also in there, for a bogus stop-and-frisk in 2013. He lost two vacation days.

Less famous faces include Officer Steven Souffrin, who was in a department vehicle in 2013 that hit a cyclist and then fled the scene, according to the files.

He didn’t get the cyclist’s details or call an ambulance — and didn’t report the crash to Brownstone Brooklyn’s 76 Precinct. The biker suffered minor injuries, and Souffrin suffered the loss of 15 vacation days.

School Safety Agent Nelson Fields wasn’t so lucky — he was fired after telling a subordinate she could get time off if she sent him a photo of herself “wearing a robe” and showing a co-worker inappropriate pictures on his cellphone, records show.

The Patrolmen’s Benevolent Association slammed Buzzfeed for releasing the records, claiming the database is “the perfect tool for unstable individuals with a grudge against cops to identify and go after police officers and their families.”