By Allie Griffin and Aaron Feis 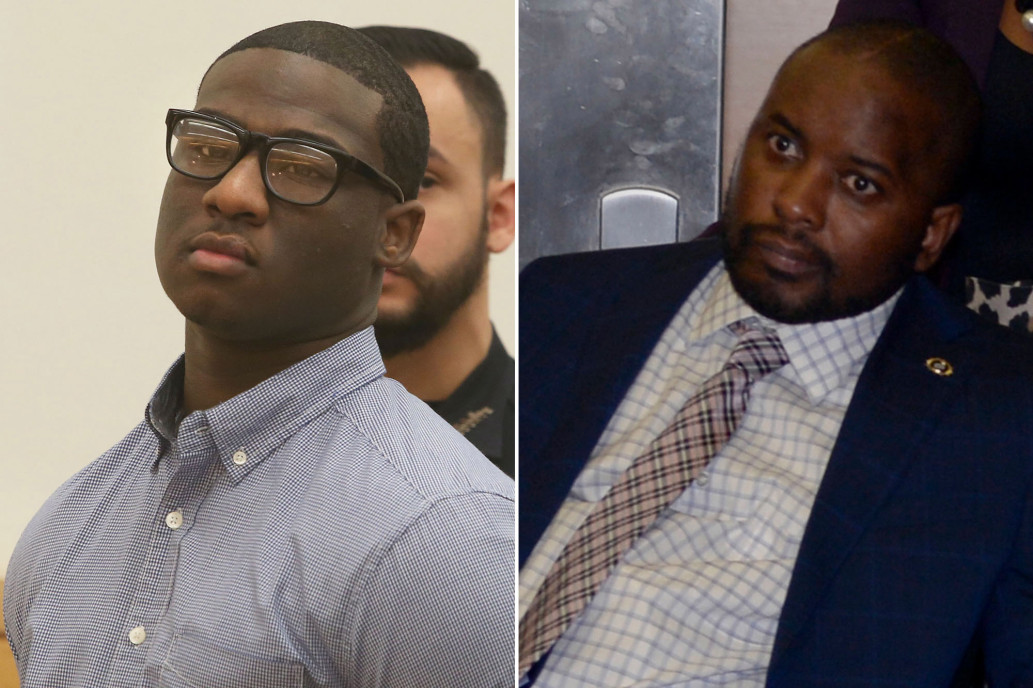 The teen gangbanger convicted of dragging an NYPD detective for several Brooklyn blocks  with a stolen car — leaving the lawman permanently confined to a wheelchair — was sentenced Wednesday to a mere 1 ⅓ to 4 years behind bars, sparking outrage from fellow cops and the victim’s wife.

A month after Justin Murrell was acquitted of attempted murder for dragging Det. Dalsh Veve through the streets of East Flatbush, convicted by a Brooklyn jury on a lesser assault charge, Veve’s colleagues and relatives were let down again when Brooklyn Supreme Court Justice Ruth Shillingford sentenced Murrell to only a fraction of the 10-year sentence he faced.

The judge “spit on every shield on every chest in this city” with the ruling, railed Police Benevolent Association President Patrick Lynch. “She spit on our hero.”

Before the sentence was handed down, Veve’s wife — speaking on behalf of her husband, who was in attendance but unable to address the court — pleaded with Judge Shillingford to impose the maximum penalty on the teen who rendered her husband brain-damaged and, at times, unable to recognize his own family.

“Eighteen months later, we are still trying to put the pieces of our life together,” said Esther Veve of her hero husband, who prosecutors have said will never fully recover from his wounds. “There have been moments when he can’t recognize his little [4-year-old] girl and you can imagine how that breaks our hearts.”

“I’m speaking now because my husband is not able to speak for himself,” she continued in an emotional victim-impact statement to the court, at points becoming overwhelmed with tears. “I speak for him and our daughter.”

But Veve’s appeal didn’t sway Shillingford, who handed down the light sentence in part because Murrell, a purported member of the Crips with 11 prior legal run-ins, was only 15 at the time of the incident.

Law-enforcement officials were quick to pan the treatment of Murrell with kid gloves.

“Tonight I ask the city to put their heads on their pillow … and think about our hero police officer Dalsh Veve, who will need help to put his head on the same pillow,” an apoplectic Lynch fumed outside court. “To think about Esther Veve, whose life is changed and now she finds out she won’t hear justice.”

“This is wrong and there’s no nice way to say it.”

“What I witnessed in court today is a clear example of how a defective law interferes with justice and how the court simply disregarded the risk and danger that cops face protecting the public,” Palladino said. “The no bail-no jail policy of our political leaders in this state should anger all cops and hard-working, law-abiding citizens of New York.”

The outrage extended to the Brooklyn District Attorney’s office, with a spokesman slamming the sentence as “regrettable,” in a rare rebuke of a judge’s decision.

“This defendant had numerous contacts with the criminal justice system and was given numerous opportunities to get on the right path,” spokesman Oren Yaniv said. “Yet he has repeatedly proven that he has no regard for the rule of law and is a danger to society.”

Murrell, now 17, was behind the wheel of a stolen Honda Civic when Veve pulled him over for a routine check one June 2017 night.

But as the 9-year NYPD vet approached the car, Murrell floored it, dragging Veve for three blocks as he clung desperately to the car.

Murrell spoke only once in court Wednesday, to decline to add anything to his lawyer’s plea for mercy on account of Murrell’s age.