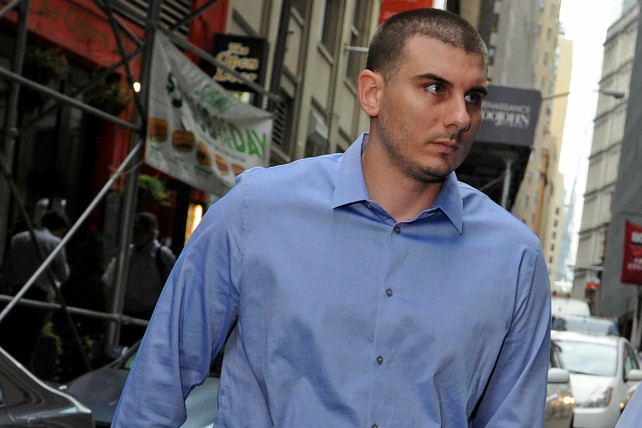 The NYPD’s top doctor determined that a chokehold was never used on Eric Garner — despite a ruling to that effect by the city medical examiner’s office — and he based it on a second video never publicly released.

The finding by Chief Surgeon Eli Kleinman, made in December 2014, months after the incident that July, was revealed Thursday in a hearing ahead of the departmental trial of Officer Daniel Pantaleo.

That determination contradicts the city medical examiner’s report — as well as an independent autopsy ordered by Garner’s family, which both found the illegal tactic had been used.

Kleinman’s report was at the center of a Thursday morning “housekeeping” discussion for Pantaleo, who is facing administrative charges for reckless use of force and strangulation.

The report, which was made at the request of the NYPD’s Internal Affairs Bureau, blamed Garner’s own health problems for his death — a point cheered by Pantaleo attorney Stu London.

“Kleinman’s report is unbelievable in the sense that it basically exonerates Officer Pantaleo,” London said.

London filed a motion to dismiss all charges against Pantaleo and block the Civilian Complaint Review Board from prosecuting the case, claiming it’s not within the agency’s jurisdiction to litigate it.

He also argued that there are “egregious inconsistencies” in a witness claim filed to the board.

“London trying to toss the case out and dismiss the CCRB was a disgrace,” she said. “That was an insult.”

Garner died July 17, 2014, after Pantaleo placed him in a chokehold while attempting to arrest him for selling “loosie” cigarettes on the sidewalk. Pantaleo has been on desk duty since the incident.

A Staten Island grand jury refused to indict Pantaleo when his case was brought before it back in December of 2014.

Gardner’s death was ruled a homicide by the medical examiner’s office in August of that year.

The NYPD decided over the summer to move forward with the trial — and no longer wait for the federal Department of Justice to finish its own probe.

The next court date, in preparation for the trial, will be held on May 2. The trial is set for May 13.