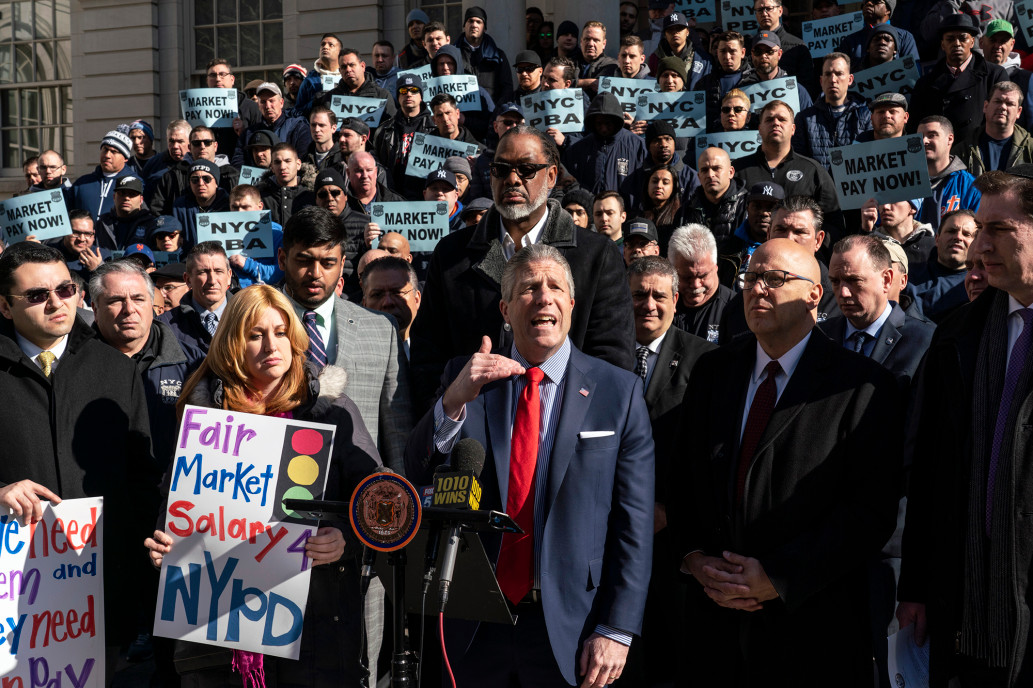 The city’s largest police union has come up with a sure-fire way to make sure cops know which City Council members support a wage increase for them.

The Patrolmen’s Benevolent Association plans to put up posters in every precinct, transit district and Housing patrol area this week to let its 24,000 members know who backs a “fair market wage’’ — and who doesn’t.

Blue posters will feature a head shot of elected officials who have shown support for a salary increase and thank the pol.

Red posters will read, “Councilmember [X] does not support market-rate pay for police officers” above a photo of the local representative.

Council members supporting the wage increase “deserve to be recognized,” said PBA chief Pat Lynch, while “PBA members also need to know which council members are refusing to stand with the women and men who protect their district.”

The PBA wants its officers’ pay to be on par with other nearby departments, where cops can make 30 percent more on average.

Officers in New York City start at a base pay of $42,500 and are capped at $85,000 after five and a half years, not counting overtime. But an officer with the Port Authority maxes out at just over $117,000, and MTA officers and State Trooper hits their ceiling at about $100,000, according to the union.

“Our city cannot continue to recruit or retain the finest police officers while paying them a drastically lower salary than any other police department in this area,” Lynch said in a statement.

That sentiment was echoed by 41 council members last week, when they sent letters to Mayor de Blasio calling for a “substantial wage increase” for the “severely underpaid” officers in the NYPD.

“Despite their brave work protecting New Yorkers every day, the brave men and women of the New York City Police Department are receiving salaries that are not commensurate with police officers from other departments,” said a letter signed by the council members including Donovan Richards, the Public Safety Committee chair.

“It is disgraceful that the men and women who protect one of the richest cities in America struggle to be able to feed their families and pay for basic needs.”

The PBA has battled the de Blasio administration for years over salaries.