By Allie Griffin and Aaron Feis

Photos by Dennis A. Clark. 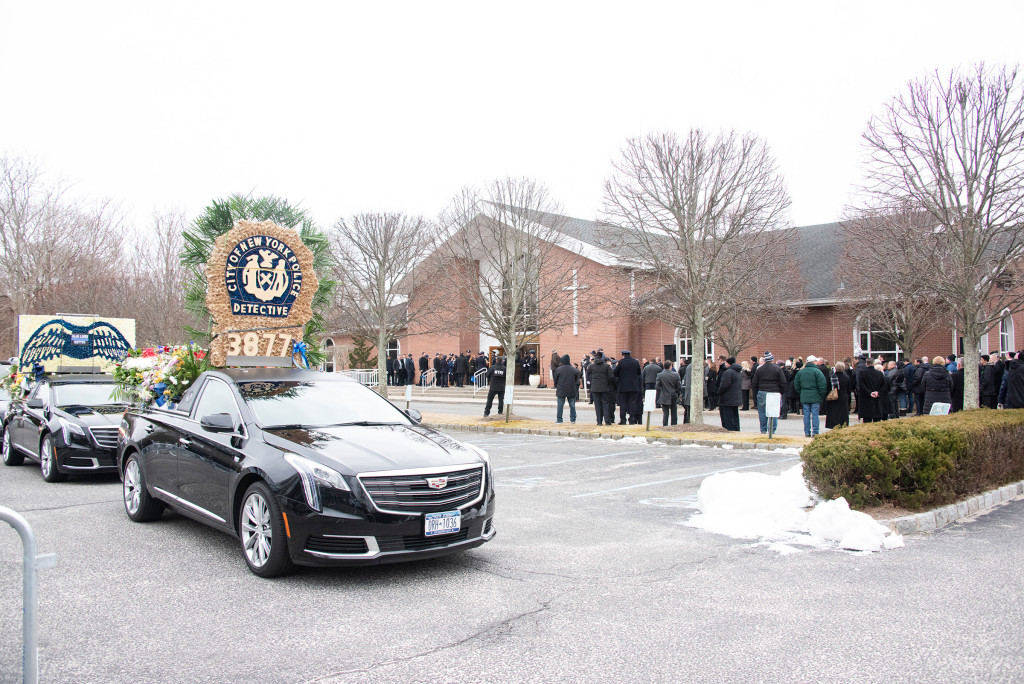 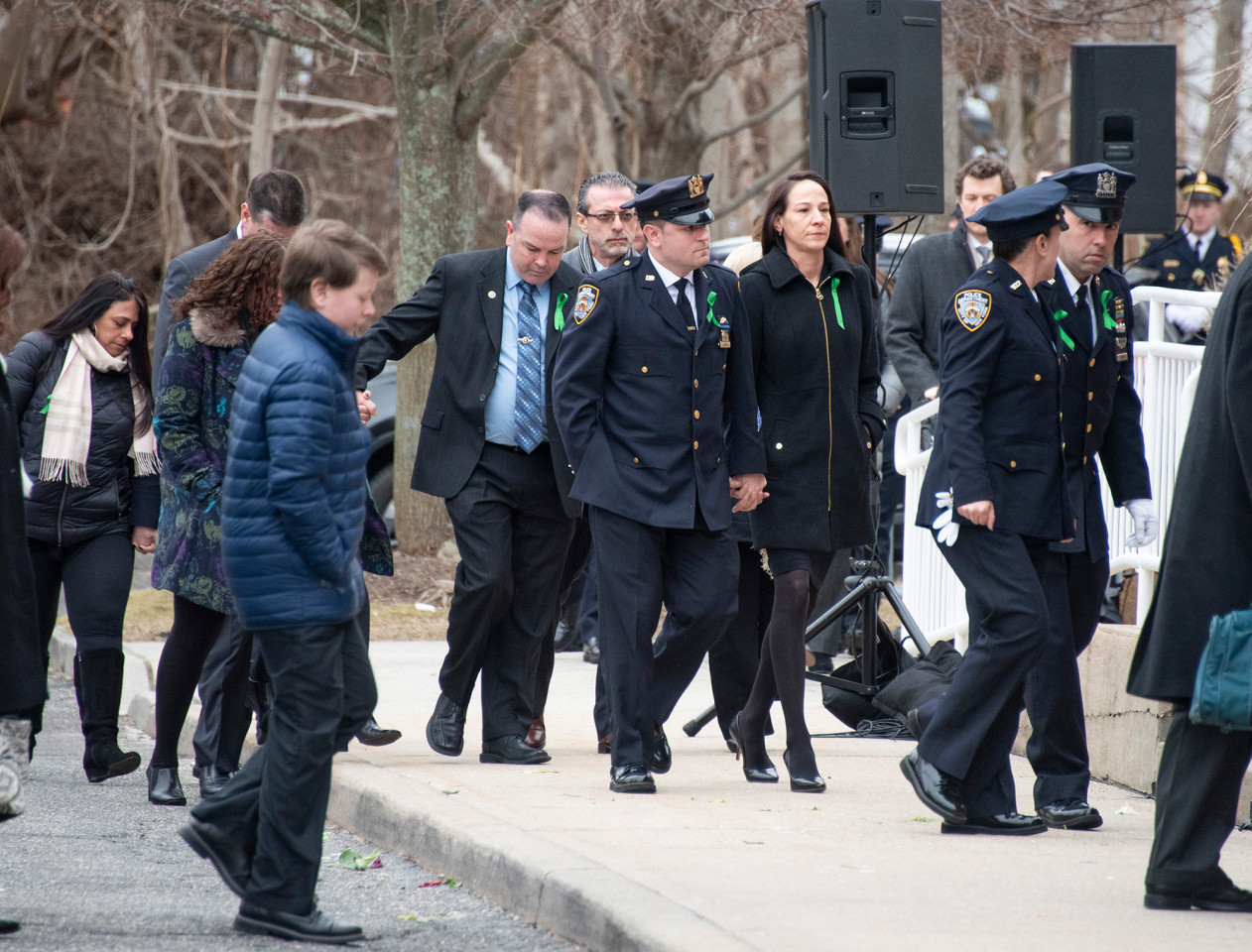 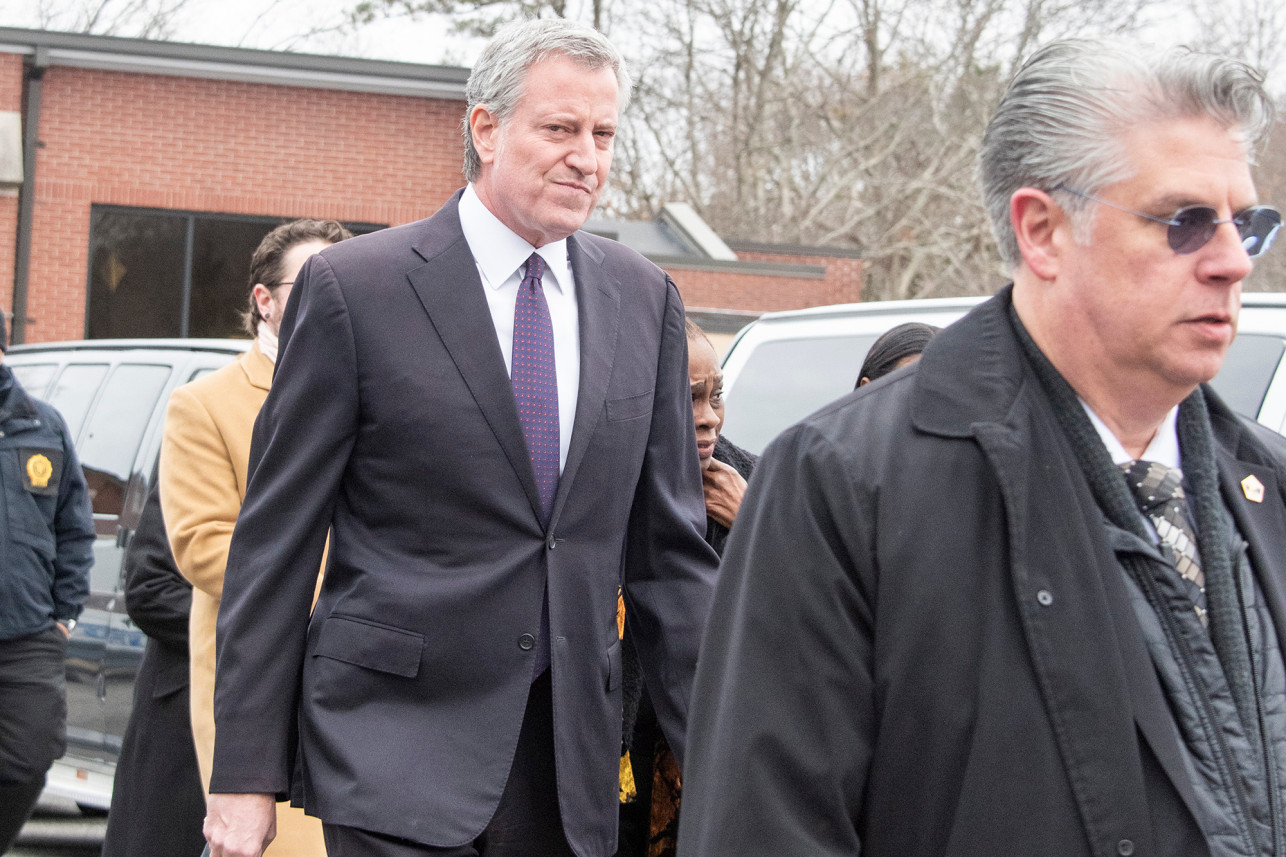 Simonsen could have repeatedly left their Queens precinct for a promotion over the years, said Detective Ricky Waters to the sea of thousands of mourners at the officer’s funeral on Long Island.

“But he would tell us, ‘Bro, I love this place. I love you guys. Where else would I be?’ ” said Waters, Simonsen’s partner of five years at the 102nd Precinct Detective Squad.

Just feet away in the Church of St. Rosalie, Simonsen’s body lay in a closed casket, draped with an ivory cloth quartered by a brightly colored cross, watched over by a drawn portrait of the hero.

Simonsen, whose family and friends knew him as “Smiles,” was killed last week by friendly fire while responding to a Queens robbery. It had been his day off, but he came in partly to work another case.

Mourners packed the church on a cold February morning made all the more bitter by the cruel irony that their brother was cut down by an NYPD bullet.

“I will miss the comfort of having Brian sit across from me in the office,” Waters told the capacity crowd of beat cops, brass, city officials and family members, including Simonsen’s widow, Leanne, and mother, Linda. “I will miss his infectious laughter, the way he lit up a room.

“I will miss my partner, but mostly, I will miss my friend,” added Waters, his voice finally breaking under the emotion he choked back for much of the eulogy.

It was that friendship that saw Simonsen — a fiercely loyal Mets and Islanders fan — rib his partner over sports, and put Waters up for six months in his Suffolk County home as he was going through a divorce.

“I share in the loss of everyone who knew him, but I am sad for the ones who had yet to know him,” Waters said. “Brian was a true friend who never wanted anything in return.”

Few knew that better than Sean Peterson, Brian’s cousin and a fellow cop.

“From a young age, Brian lived life to his fullest,” said Peterson, recalling a childhood spent fishing and riding bikes together. “Brian seemed to have the ability to get us both in trouble.”

In March 2000, the cousins’ already “inseparable” bond deepened when they became cops at the same time.

Simonsen spent all 18 years, 11 months and 12 days of his NYPD career assigned to the Queens precinct he loved.

“Being an officer was not only what Brian did. It was who he was,” Peterson said. “He ran in when everyone else ran out.” 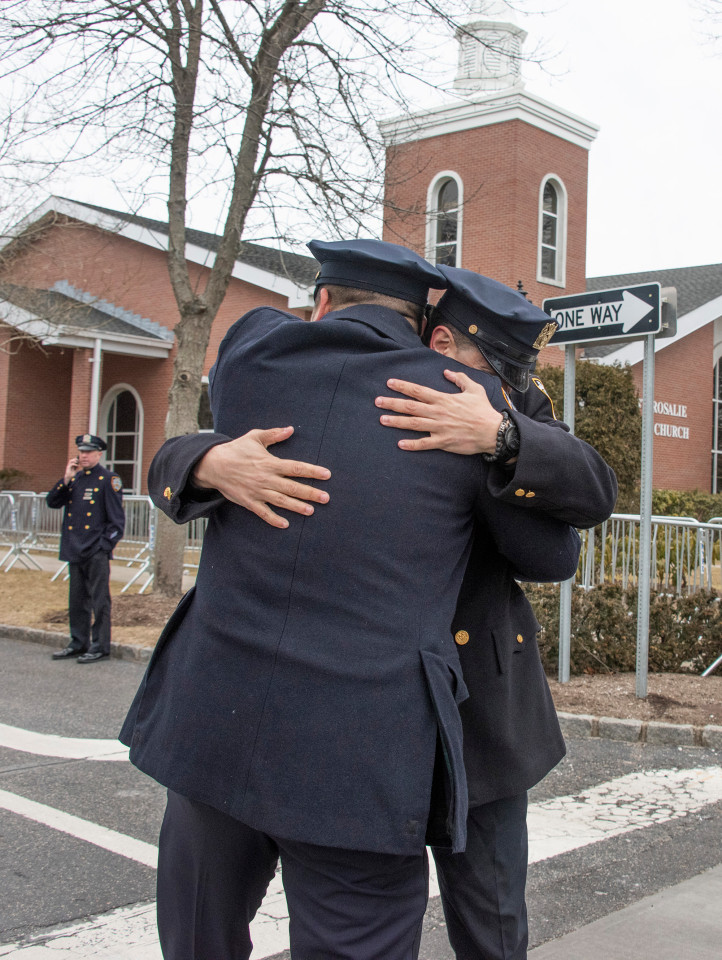 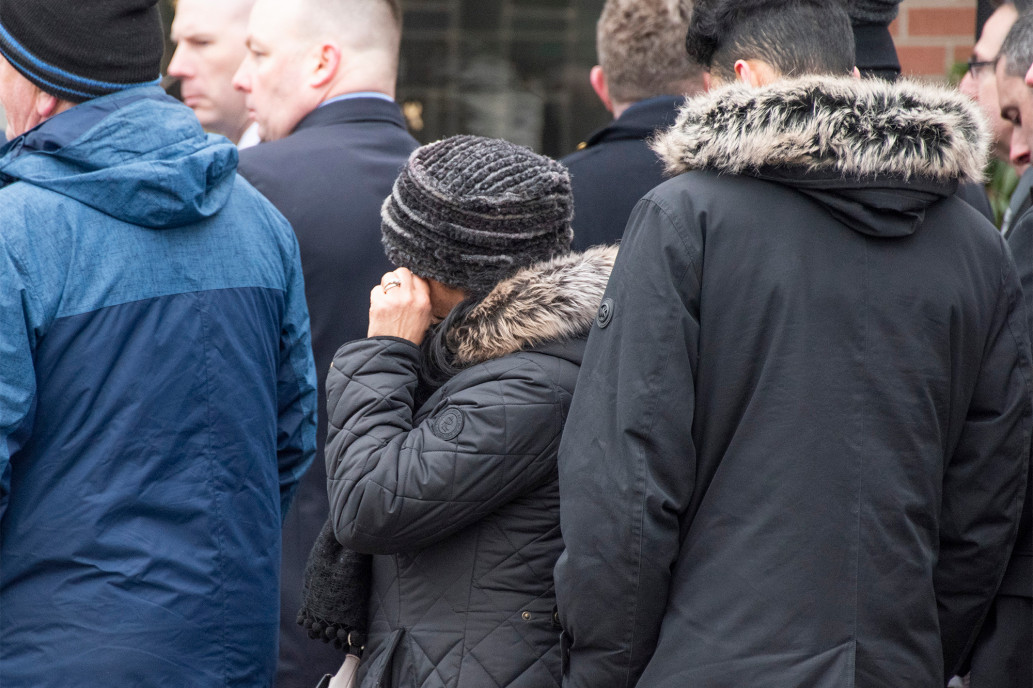 It was that dedication that led Simonsen to head to work Feb. 12, despite it being his day off.

He spent the morning at a Detectives’ Endowment Association meeting, before trying again to crack a nagging robbery case ahead of an upcoming Compstat meeting.

When a call came into the 102nd Precinct around 6 p.m. that the T-Mobile store at the corner of Atlantic Avenue and 120th Street was being held up at gunpoint, it was that same dedication that moved Simonsen to tag along with seven responding cops.

“Those cops responded to a call for help,” said an emotional NYPD Commissioner James O’Neill on Wednesday. “They didn’t hesitate.

“They are not to blame.”

They were met at the Richmond Hill store’s entryway by career criminal Christopher Ransom, who pulled the trigger on a handgun identified as fake only once it was too late, authorities said.

In less than a minute, seven cops fired 42 shots.

Eight rounds struck Ransom, whom police sources believe may have been attempting suicide by cop — but in the wild fusillade, two lawmen were also struck.

Sgt. Matthew Gorman took a bullet to the leg. He was at the funeral in a wheelchair.

“The only two people responsible for Brian’s death — the only two — are the two career criminals who decided to go into that store and commit an armed robbery,” said an increasingly fiery O’Neill, referring to Ransom and alleged lookout man Jagger Freeman.

Prosecutors have agreed, hitting Ransom, 27, and Jagger, 25, with a slew of charges, including murder.

“The next time you see the lights and hear the sirens, take a moment to think about the people who answer those calls for help,” said O’Neill. “They will put their lives above their own. They are the NYPD, and they are Detective Brian Simonsen.”

O’Neill closed his eulogy by posthumously promoting Simonsen to a Detective-First Grade, to a standing ovation by the mourners.

Mayor de Blasio also asked New Yorkers to spare a thought on a snowy Wednesday for the people who keep them safe.

“I ask every New Yorker, when you see a police officer today, please offer them condolences as you would to someone who has lost a family member, because indeed they have,” said de Blasio.

“He wanted to be a police officer from an early age, and he realized his dream,” the mayor added. “He was devoted to his precinct, to his brothers and sisters in blue, and to everyone in the community he served.”