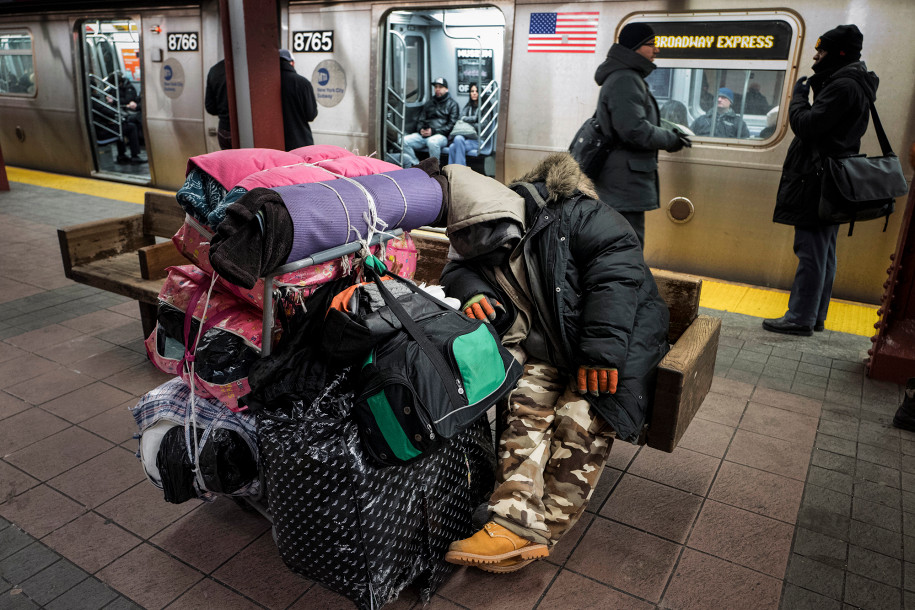 A Mayor Bill de Blasio administration scheme to get more subway homeless people to take the city up on supportive programs — instead of getting summonses for bad behavior — has backfired, an anonymous letter purportedly sent by transit cops to homeless advocates alleged Tuesday.

De Blasio announced his Subway Diversion Project in June — touting “Supports, not Summonses” in a press release. The project allows homeless people found violating MTA rules — like taking up more than one subway seat — to avoid paying civil summonses by opting into the program offering a host of social support services.

But the letter unveiled Tuesday by the Coalition for the Homeless charges that transit cops are “constantly being threatened and told by our immediate supervisors to get diversions.”

While civil summonses could be issued on the ground, the homeless caught in the act are instead arrested and brought to NYPD commands, where they are “coerced” to opt into the program, the letter states.

Still, the homeless are choosing to just take the ticket.

Of the 1,296 individuals the NYPD has encountered through the program from July through November, just 477 — or 36.8 percent — accepted shelter and other services.

That means two-thirds were issued civil summonses for the rule-breaking offenses — many of which are trumped up in the first place, the anonymous officers allege.

“The homeless are now clearly being targeted as violators of transit rules and being treated differently than any other citizen,” the letter says.

“Can you imagine if we arrested someone in a business suit, on their commute home, with their briefcase on the seat next to them and happened to have forgotten their ID that day? Or if it was a 16-year-old sitting in the stairway waiting for their train so they can get to school? There would be an uproar.”

Some commands have posted pictures of homeless people next to wanted criminals — “blurring the lines of what qualifies as a ‘bad guy’ for the NYPD,” the letter charges.

Police officers unions and advocacy groups, including the coalition, have panned the program for using police officers and arrests to implement social services.

“Once again, New York City police officers are acting as a Band-Aid to cover up another of Mayor de Blasio’s failures,” Police Benevolent Association President Patrick Lynch said in a statement reacting to the letter Tuesday. “The NYPD’s current Subway Diversion program is not really helping the homeless, because there is not enough long-term investment in the mental health treatment and other assistance they need.”

The letter was released ahead of a City Council hearing on the program Tuesday.

NYPD Transit Chief Edward Delatorre said he hadn’t seen the letter before the hearing and refuted a specific claim that police were under a “quota” to get diversions into the program.

The chief added that the goal is to get to a point where cops can “expunge every single summons.”

“I don’t believe summonses are the answer. I believe connecting them to services are going to be the beginning of the answer,” he said. “My officers can make that connection to services.”

It’s unclear if the city could actually shelter the several thousand people it has estimated to reside on the streets and in the subway system. Molly Park, the first deputy commissioner of the city’s Human Resources Administration, admitted at the hearing that there are currently 350 safe haven beds of the 1,000 de Blasio promised to be delivered by the end of his term in 2021.

There are currently about 1,800 available.

“The fact of the matter is there are no new services that we are offering people on the back end,” said Brooklyn Councilman Stephen Levin. “So we can have that interaction … if the outreacher doesn’t have anything to offer them?”