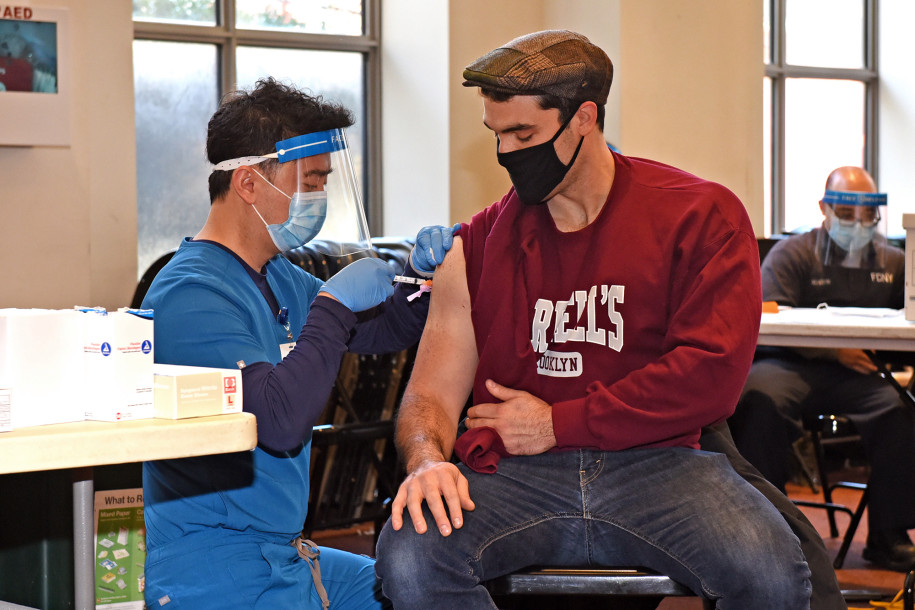 FDNY firefighters began receiving coronavirus vaccines on Tuesday — but a planned rollout of the shots for the NYPD was scrapped, with a union memo citing a delay on the state’s end.

“I got it because I want to protect the people I love, the people I work with, the people they love,” said firefighter Martha Brekke, one of the first to get the shot at FDNY headquarters in Downtown Brooklyn.

“I just think it’s important to take care of as many people as we can.”

Between three locations — department HQ plus the fire academy on Randall’s Island and the EMS academy at Fort Totten in Queens — the FDNY can now inoculate about 450 members per day.

The rollout unfolded in the face of a survey conducted earlier this month by the Uniformed Firefighters Association that indicated that more than half of smoke-eaters would refuse the vaccine.

Union president Andy Ansbro — who said that reluctance was due in part to a “real education issue” about who needs the vaccine — was among those to receive the shot Tuesday.

“Hopefully this will go a long way to getting the city and the country back on track,” he said.

Ansbro praised recent efforts by the department and the union to dissuade firefighters’ fears through information, and was cautiously optimistic that they appear to be working.

“The union had a Q&A with a virologist and we’ve answered all the questions our members sent to us. About two dozens members actually reached out to me saying the work we’ve done has changed their minds,” he said.

“Right now it seems like several thousand members have signed up to get this and that’s very encouraging.”

The FDNY said Tuesday that more than 1,000 city EMS workers have now been vaccinated.

But while the Bravest lined up, the Finest were kept waiting.

A memo circulated Monday within the Detectives’ Endowment Association union said that a planned Tuesday launch for cops was on hold due to supply issues with the state.

“The State has not released the vaccine in the quantity needed for the NYPD,” the memo reads in part.

NYPD Commissioner Dermot Shea confirmed the hold-up during a wide-ranging briefing Tuesday morning, noting that the department is “anxiously awaiting” their jabs.

“The lives of cops and the New Yorkers we serve are being put in grave danger with the delay of the available COVID-19 vaccine to the NYPD,” said DEA President Paul DiGiacomo in a statement.

“Detectives have thousands of close-contact interactions daily with the public as we continue to keep people safe, provide medical aide, and respond to calls for help,” he continued. “On the heels of the death of six Detectives and current rising virus numbers, DEA members need the vaccine before another family is tragically left behind — and they need it now.”

Forty-eight members of the NYPD have died of the coronavirus, according to the department.

“Once again, politicians in Albany and City Hall are wasting time with bureaucratic gymnastics instead of looking at the reality on the ground,” he said in a statement. “New York City police officers aren’t just on the front line. We cover every part of the front line: from hospitals and housing complexes to the corner store.

“We have more daily contact with New Yorkers than any other city agency,” continued Lynch. “We are continuing to press for vaccines to be made available to police officers as soon as possible.”

A spokesman for the state Department of Health said that vaccines are on the way for cops, but that groups prioritized ahead of them — including front-line health care workers and those in nursing homes — are still getting inoculated.

“NYPD as first responders are eligible in phase 1b, that has not changed, and any suggestion that we are holding back on providing vaccines is patently false,” said Gary Holmes. “We are still in the middle of phase 1a, which includes frontline health care workers, nursing homes and certain congregate care settings.

“Timing depends on when the vaccine supply is available and we look forward to working with NYPD and all first responders in operationalizing distribution of COVID-19 vaccines.​”

Because they are trained and certified to both fight fires and administer emergency medical services, firefighters are qualified for the first phase.

Shea stated earlier this month that vaccines would not be mandated for NYPD personnel, but later opened the door for them to potentially become compulsory.