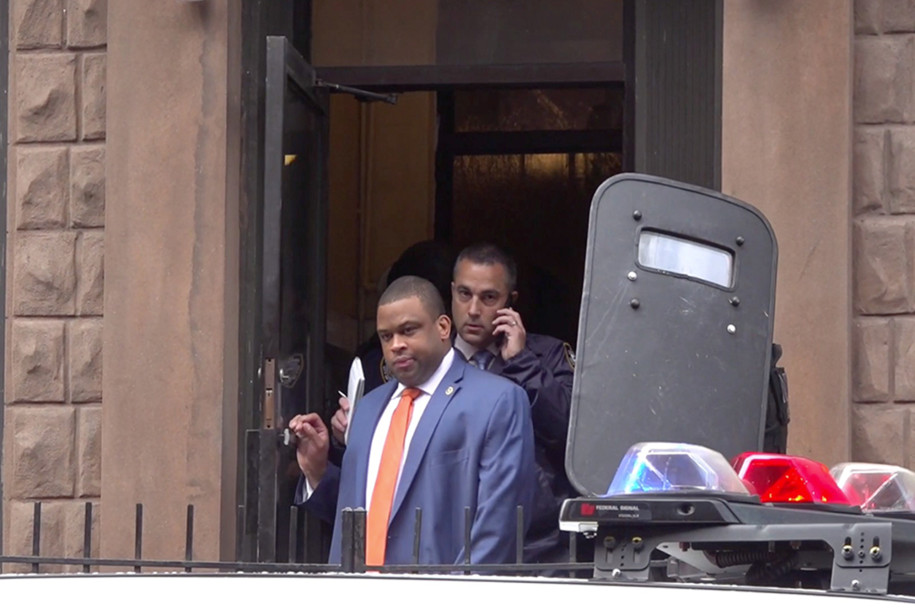 Police at the home of a suspect who is accused of assaulting a female officer today. Scootercaster / FreedomNews.tv

City police unions slammed the Police Department for retreating from an hours-long standoff at the home of a Black Lives Matter organizer accused of assaulting a cop.

Dozens of NYPD officers, some wearing tactical gear, stormed the Hell’s Kitchen home of Derrick Ingram, Friday morning around 7 a.m. — only to retreat six hours later at the order of Police Commissioner Dermot Shea, as protesters arrived to shout down the police.

“The NYPD’s top brass better start talking: Who really issued the order to retreat?” asked PBA President Pat Lynch in a statement. “Who put police officers in the dangerous position of backing down in the face of an angry mob?”

The officers arrived at the scene attempting to arrest Ingram for allegedly assaulting a female police officer when he used a bullhorn to scream into her ear at a protest, causing hearing damage, according to police.

Ingram, 28, refused to open his door, creating a stalemate because police didn’t have a warrant to enter his home, sources said.

The Detectives’ Endowment Association joined in rebuking the department’s decision, demanding an explanation.

“By walking away from arresting a man who was wanted for previously assaulting a cop and backing down to an angry mob, the lives of detectives and their fellow cops were endangered and their valuable time was wasted,” said Paul DiGiacomo, the association’s president.

Ingram is co-founder of the Warriors in the Garden, a youth-led group formed in the wake of the Minneapolis police killing of George Floyd that organizes protests focusing on peaceful demonstrations around the city.

The group issued a statement accusing police of using “threats and intimidation tactics” to rattle Ingram, who has “no criminal history,” they said.

“This was an attempt to silence our movement,” the group continued. “This militarized police response endangers the safety of residents in Hell’s Kitchen and across NYC.”