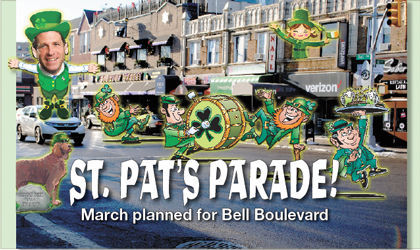 Get ready for the first annual Bayside St. Patrick’s Day Parade. On March 24 at 10 a.m., it’ll proceed down Bell Boulevard from 35th to 41st avenues.

Francis McLoughlin, the vice president of the parade organizing committee, is glad that it’s finally set for 2018.

He told the Chronicle that he was approached by fellow Bayside natives Warren Scullin and Kieran Mahoney three years ago about the possibility of a St. Patrick’s Day parade in Bayside and quickly took to the idea.

“It just took a little longer than we anticipated to get all the paperwork filed and get the parade to where it is today, ready to walk up Bell Boulevard on March 24,” he explained. McLoughlin, who now lives in Manhattan, is one of the aides for the parade.

Neighborhood businesses like Monahan and Fitzgerald, Jackson Hole and Brian Dempsey’s are sponsoring the event. The committee has raised funds for it. And a dinner dance honoring the event’s grand marshal and aides has been sold out. According to the parade’s official Facebook page, a bigger venue will be sought for 2019.

In terms of turnout for the event itself, though, McLoughlin has high hopes.

“I’m hoping that we can have at least 35 marching units this year,” he said. “And I would love to see 10,000 people supporting us and supporting the businesses.”

Many groups have already signed on.

“There will be pipe bands, high school marching bands and then there will be Irish step dancing,” McLoughlin said of the parade. A lacrosse team will also march, in addition to other groups.

Parade organizers are seeking more of them, too.

If you want your group to participate, information about applying is available on the event’s page on Facebook.

McLoughlin said that the organizers filed for the necessary parade permits with the NYPD back in November.

“We’ve been in contact with the 111th Precinct and they said it should be no problem,” he explained.

The parade organizer added that another permit may be sought for 41st Avenue from Bell to 214th Street, so that a band could play on the street there.

In this borough, Sunnyside and the Rockaways have had St. Patrick’s Day parades in recent years. But it hasn’t been a tradition in the northeast Queens neighborhood.

According to McLoughlin, other reactions in the neighborhood have also been very positive.

“A lot of people are saying this is long overdue,” the organizing committee vice president said.

Northwest Bayside Civic Association President Jena Lanzetta is firmly in support of the parade. She told the Chronicle that she plans on marching.

“Kudos to everybody organizing; putting together events like these is very complicated,” she said. “This is going to be a great event for anybody in Bayside.”