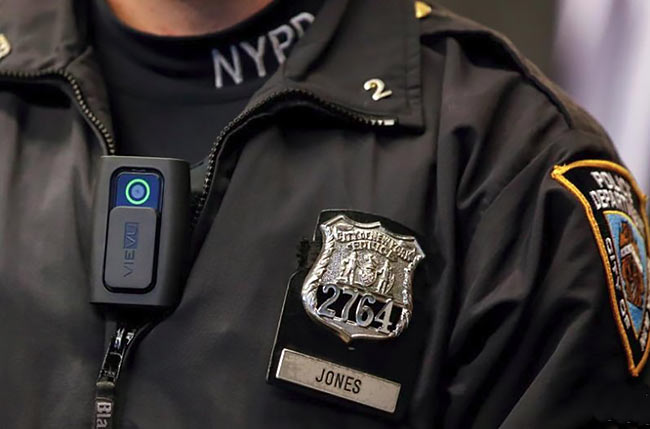 FILE PHOTO: A police body camera is seen on an officer during a news conference on the pilot program of body cameras involving 60 NYPD officers dubbed 'Big Brother' at the NYPD police academy in the Queens borough of New York, U.S. on December 3, 2014. REUTERS/Shannon Stapleton/File Photo

“There are so many unresolved issues regarding the use of body cams, including the very basic question of whether they actually produce a meaningful change in the interaction between police officers and civilians on the street,” Patrick Lynch, president of the Patrolmen’s Benevolent Association, said in a statement.

The largest U.S. police department will start distributing body cameras this month and expects to have issued 18,000 units by the end of 2018, a year earlier than previously planned, Mayor Bill de Blasio’s office said in a statement.

“You know that you’re going to be wearing that body camera, your actions are going to be seen by all. It’s a good reminder of how to approach situations,” de Blasio said at a news conference.

When the program began as a pilot in April 2017, the police department said every patrol officer and detective would have cameras by the end of 2019. The city decided to accelerate the program after studying thousands of hours of video from 2,470 body cameras that have already been deployed.

“I know that in some situations, these cameras have a great potential to deescalate rather than escalate,” Police Commissioner James O‘Neill said at a news conference on Tuesday. “It’s just not enough to keep people safe, you have to make sure people feel safe, too.”

New York City is among many U.S. cities that have approved or expanded the use of body cameras since August 2014, when a white police officer fatally shot Michael Brown, an unarmed black teenager in Ferguson, Missouri.

The incident, which was not captured on video, triggered protests and a national debate about the use of excessive force by police.

De Blasio said at the news conference that officers who failed to properly operate cameras would be penalized.