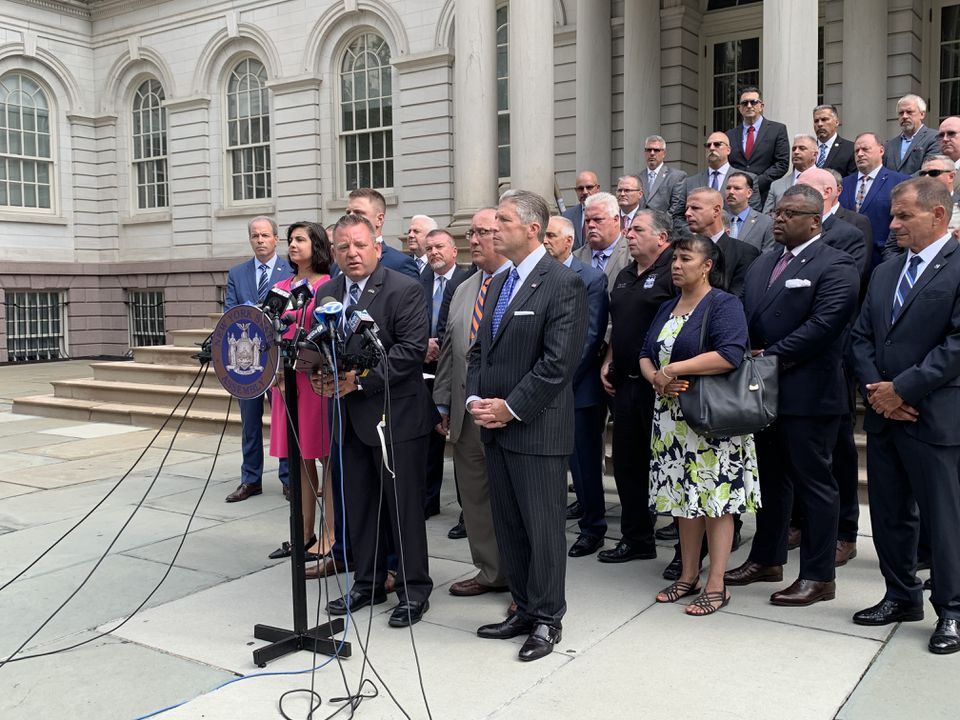 After officers in Brooklyn and Harlem were filmed being doused with water in what have become viral videos, Island Assemblyman Michael Reilly (R-South Shore) and Long Island Mike LiPetri (R) unveiled a bill Wednesday at City Hall that would make it a felony to throw water at cops.

CITY HALL -- On the steps of City Hall Monday, Staten Island Assembly members Michael Reilly (R-South Shore) and Long Island Assemblyman Mike LiPetri (R) were joined by heads of local police unions as they announced they will introduce legislation that would make it a felony to throw water at cops.

The lawmakers drafted the bill after officers in Brooklyn and Harlem were filmed being doused with water in what have become viral videos.

They also challenged Mayor Bill de Blasio ahead of Wednesday night’s Democratic debate to condemn the water bucket attacks on the national stage to show his support for police officers across the city, state and country.

“What’s harsh is the fact that the leader of this great city has routinely used his platform and now the national stage to burn rather than build bridges between the community and law enforcement, this is disgraceful,” said LiPetri. “Mayor Bill de Blasio, I challenge you tonight to use your national platform at the Democratic presidential debate to unequivocally condemn these attacks and proclaim your full support and respect for the sacrifice of our officers.”

The bill would make it a Class E Felony to throw or spray water or any substance on on-duty cops or peace officers and offenders could face up to one to four years in prison.

The viral videos sparked outrage from police unions who have called on Police Commissioner James O’Neill to resign and said the incidents were a result of a “Pantaleo effect” that O’Neill and the mayor have created in the city.

The water bucket videos came on the heels of protests around the city after the Justice Department announced it would not bring federal charges against Staten Island Officer Daniel Pantaleo, who was involved in Eric Garner’s July 2014 death on Bay Street.

Despite the Justice Department’s decision, the mayor has touted the change in NYPD culture over the last five years following Garner’s death with the help of O’Neill’s neighborhood policing strategy and the retraining of NYPD cops on the use of excessive force.

Although the mayor and police commissioner both quickly condemned what they saw in the videos, police supporters think officers in the viral videos would have acted differently “pre Pantaleo.”

Police Benevolent Association head Pat Lynch said that in 2014 after the death of Eric Garner on Bay Street, he “begged” the mayor to “tone down the rhetoric on the street.”

“We begged that the temperature be brought down,” Lynch said. "We feel that same temperature on the street and we’re seeing it like we did in 2014. If folks will dump water over the head of New York City police officers they’ll do it to everyone.”

Lynch called on City Hall to reevaluate “where they’re taking this city.”

“It might be a water bucket today, it might be a cement bucket tomorrow,” Lynch warned, adding that he expects the legislation to move “quickly” in Albany because politicians on both sides of the aisle have condemned the attacks.

Assemblyman LiPetri also said he did not expect the mayor or police commissioner would push back against the bill.

“If he [is] supportive of law enforcement community, then he would be supportive of this legislation,” LiPetri said of the mayor.

During his time as a cop, Reilly said he was subject to attacks from criminal suspects who threw things at him and, in some cases, he was assaulted too -- and that the resulting charges were often dropped to misdemeanor offenses.

“Instead of them standing up and saying ‘let’s see where the facts lead, let’s see what’s going on, [let] an investigation run its course,'...they throw out some one liner in search of their next office. That’s the problem,” said Reilly. “Mayor de Blasio was elected to lead a city, not lead a movement, it’s time that we had some real leadership in City Hall.”

Malliotakis called on the mayor to resign if he cannot stand up for the city’s cops.

“What is sad, is that we have to hold this news conference at all and what is alarming is that in 174 years since the city created a municipal police force, this law was unnecessary because New Yorker respected and supported the police [sic],” said Malliotakis. “Equally disturbing are the actions of our mayor, who once again is out of town campaigning for his ill-conceived presidential run.”

"Since he was sworn in as mayor on January 1, 2014 he has done little but pay lip-service the brave men and women of the NYPD; he doesn’t have the fortitude to back them up and he lacks the decency to sit down and negotiate new contracts that are long overdue. If Bill de Blasio can’t stand-up for those who keep us safe, then maybe he should step-down as Mayor!” the congressional candidate continued.