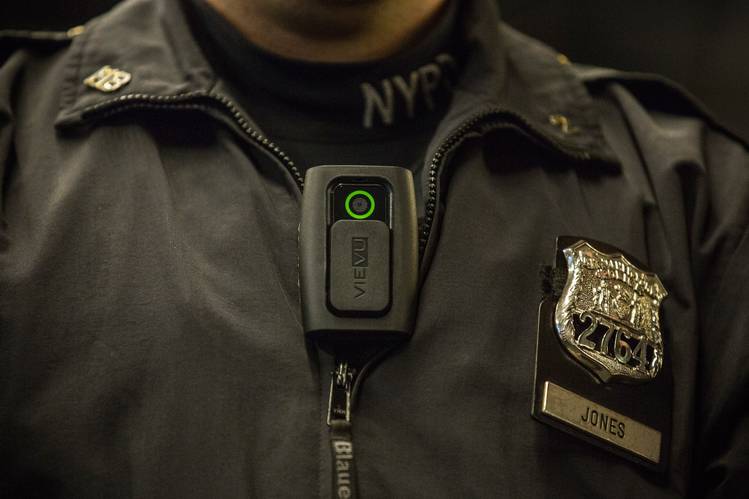 In a lawsuit filed in Manhattan Supreme Court on Tuesday morning, the Patrolmen’s Benevolent Association said the release of the footage broke state law that says personnel records used to evaluate performances of police officers, as well as firefighters and correction officers, shouldn’t be made public unless there is written consent by the officers or a court order. The union’s suit names the city of New York, the New York Police Department, and Messrs. de Blasio and O’Neill.

The PBA is arguing that the videos shouldn’t be released without the court order or consent because they can have an impact on officers’ jobs. NYPD officials contend the footage doesn’t fall under the definition of “personnel records” because the police edit the raw footage from each responding officer’s camera into a new video that contains redactions.

“Nobody with a stake in these issues should be comfortable with this politicized, secret and unchecked process,” Patrick Lynch, president of the union, which represents about 24,000 officers, said in a statement. “Not the district attorneys, not good government advocates, not the public, and certainly not police officers and their families whose personal safety is being placed at risk.”

Messrs. de Blasio and O’Neill have both previously said the state law hurt the department’s efforts to further transparency and needs to be amended.

“The release of body camera footage, when possible, is an important extension of that commitment,” a spokesman for the mayor, Austin Finan, said in a statement on Monday.

The latest legal challenge adds to controversy that has surrounded the city’s interpretation of the state law, also known as 50-A. The NYPD itself cited the law in March 2016 when it halted a yearslong practice of making public internal documents that stated whether an officer had been disciplined. The Legal Aid Society is currently appealing a June decision by the Manhattan Supreme Court that found the disciplinary information of the officers is protected by the state law.

The New York Civil Liberties Union also is challenging the NYPD’s view that department disciplinary trial outcomes are shielded by the law in the state Court of Appeals. The NYPD cited the law when it cleared the public from a department trial room in September during the questioning of a retired police officer’s disciplinary record.

“This is just another effort to use section 50-A to keep the public in the dark,” said Chris Dunn, assistant legal director of the NYCLU. “Video footage is simply not a personnel record, which is the only thing state law shields from public disclosure.”

Lawyers for officers involved in each of the three incident referenced the state law in requesting that the NYPD shield the footage from the public, according to documents reviewed by The Wall Street Journal.

Mr. O’Neill replied to the lawyers in a letter saying that while the raw footage from the cameras would be covered by the state law, the edited footage is not because it is a “new record” with redactions “created for the sole purpose of disclosing to the public a depiction of relevant events leading up to and including the critical incident.”

In a memo filed to the court, PBA officials questioned the NYPD’s reasoning. “The NYPD’s position appears to be that it can take a copy of a confidential record and make some unspecified alterations to it in order to transform it into a ‘new’ non-confidential record,” the memo states.

Richard Aborn, president of the Citizens Crime Commission, a criminal justice nonprofit, said the footage is different than the disciplinary records of officers the NYPD has previously shielded because the documents include adjudications. He said the courts must rapidly come to a resolution on the matter.

“If there is one lesson we’ve learned from police shootings over the last two or three years, it’s the faster you can put information out to the public, the better,” Mr. Aborn said. “Information withheld can breed cynicism.”