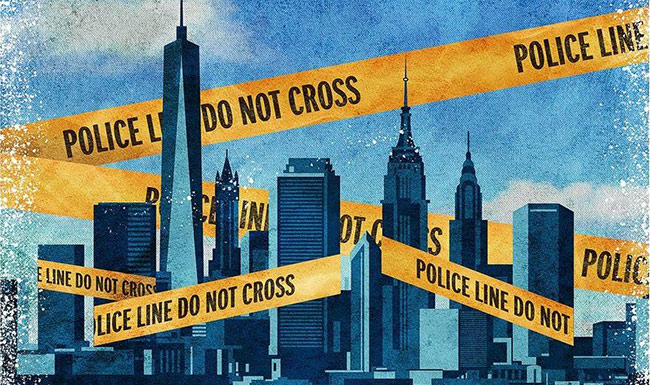 While most of the major felonies, including murder, rape, robbery, burglary, and felony assault, have decreased in New York City according to the latest reported crime statistics, many people there don’t feel safe.

And many, including New York Mayor Bill de Blasio’s former mayoral opponents and many police officers, dispute the veracity of the crime statistics.

Former mayoral candidate and retired NYPD detective Richard “Bo” Dietl, one of the most highly decorated detectives in NYPD history and the former co-chairman of the National Crime Commission, doesn’t buy the rosy crime stats.

“A man is mugged at knifepoint in front of St. Patrick’s Cathedral on 5th Avenue at 10 a.m. This is de Blasio’s New York,” Mr. Dietl said during the mayoral race. “The mayor fudges police statistics so he can tell people the city its safer but anyone with eyes and ears can tell New York is sliding back to the ‘bad old days,’ where crime was king and disarray ruled the day.”

In November of last year the PBA announced the results of a poll on public safety issues in New York City, including perceptions of crime and quality of life issues. According to the survey, there is a strong perception that crime was not improving and nearly half of the respondents expressed doubt in the legitimacy of statistics showing decreases in crime.

“The results of this survey prove that New Yorkers overwhelmingly support their police officers and the work we do, but they’re still concerned about the public safety environment. Concerns about crime and quality of life issues are continuing to create an impression that our city is on the wrong track,” Mr. Lynch said upon release of the poll. “New Yorkers overwhelmingly want to see an increased police presence in their neighborhoods, a demand that the NYPD cannot meet with its current diminished headcount.

Additionally, nearly half of New Yorkers think that the decreasing crime statistics being presented by Mayor de Blasio are false.

Legendary former NYPD detective Randy Jurgensen, the author of “Circle of Six,” noted that the recent crime stats did not tell the entire story. “Police today don’t arrest or even issue court summonses to people for public urination and other quality of life crimes.”

Back in June during the mayoral race, Republican Assemblywoman Nicole Malliotakis, who lost the election to Mayor de Blasio, also spoke of the lack of enforcement of quality of life crimes.

“Bill de Blasio is a weak mayor who is either unwilling or unable to stand up to City Council Speaker Melissa Mark-Viverito in her effort to water-down penalties for quality of life crimes like public urination, littering and excessive noise,” the assemblywoman stated. “Make no mistake about it, this legislation signed by our mayor will lead to further deterioration of our quality of life. I stand with New Yorkers who want to go about their daily lives without smelling urine in the subway station or seeing litter pile up on the street.”

“For over two decades stiff penalties for quality of life crimes kept our neighborhoods a little cleaner and a whole lot safer. Now, the progress made by our city has been sacrificed by a mayor who, along with our council speaker has put the rights of law breakers before those of law abiding New Yorkers who want a good quality of life where they live and work.”

“It’s easy for Bill de Blasio to say our city is safe as he travels in an SUV guarded by the men and women of the NYPD,” the assemblywoman said. “But, New Yorkers, whether the friends and relatives of slain police officers or of those killed or wounded in the past two days, will have a very different story to tell.”

Former New York City Police Commissioner Ray Kelly, who oversaw a historic decrease in crime during his time as commissioner, stated on a New York radio program in 2015 that the NYPD was manipulating crime statistics. He disputed Mayor de Blasio’s claim that New York City remained the safest big city in America.

“You have to take a hard look at those numbers, and I can tell you, people don’t feel safer in this city,” Mr. Kelly told the radio host. “People say this to me all the time. And perception is reality in many instances.”