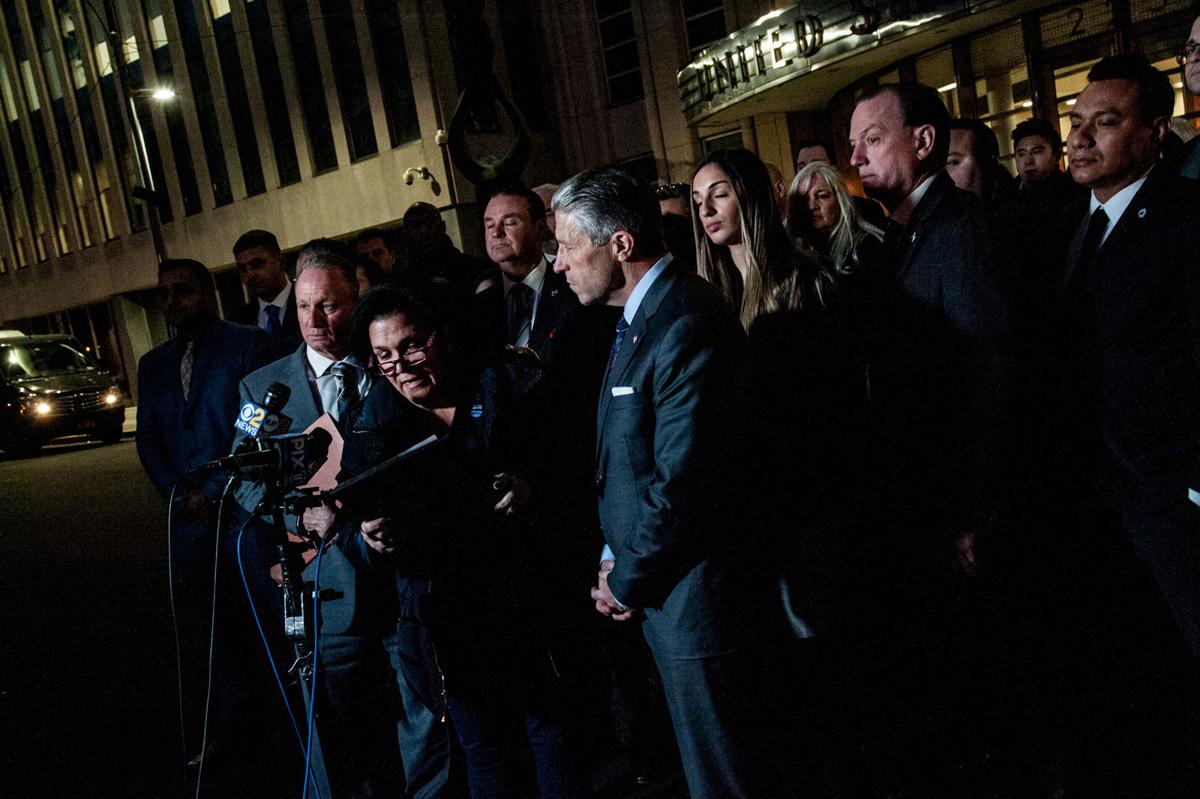 JUSTICE: Margaret Mosomillo, the widow of an NYPD Police Officer killed in 1998, outside U.S. District Court in Brooklyn Dec. 20. She read a statement after a Judge sentenced a Brooklyn woman to a two-year prison term for violating the terms of her parole when she took part in Officer Anthony Mosomillo's murder. To her right is Sal Mosomillo, the Officer’s brother and a retired NYPD Detective. Police Benevolent Association President Patrick J. Lynch is to her left. The Chief-Leader/Rebecca White

A woman recently freed following a 20-year state jail term for her role in the 1998 killing of an NYPD Police Officer was sentenced Dec. 20 in Brooklyn Federal Court to an additional two years, this time in Federal prison, for violating the terms of earlier parole.

The sentence imposed on Betsy Ramos by U.S. District Judge Nicholas G. Garaufis was the maximum allowed by law, and was cheered by the widow and brother of Officer Anthony Mosomillo, as well as by the president of the Police Benevolent Association, Patrick J. Lynch.

Following statements to the court by Margaret Mosomillo and Sal Mosomillo, a retired NYPD Detective, as well as by the Officer’s former police partner, that asked Judge Garaufis to keep Ms. Ramos behind bars, he called the proceedings “the saddest day I’ve spent as a Judge. The court cannot give comfort, adequately comfort, to anyone.”

Although Judge Garaufis said had no reason doubt Ms. Ramos’s sincerity when she earlier expressed contrition for her role in the May 26, 1998 shooting death of Officer Mosomillo, he felt compelled “to provide respect for the law and impose justice.”

He also chided her for an incident a few days earlier at the Metropolitan Detention Center—her apparent refusal to make her bed: “If she can’t fix her bed the way she’s told, how is she going to obey the law?”

Ms. Ramos, wearing gray-green prison garb, her black hair streaked with gray strands and walking with a cane, appeared to accept the Judge’s sentence with equanimity. He hinted that she would serve her term at a Federal facility in Texas that is equipped to care for her. Ms. Ramos, 55, has HIV and had cancer while incarcerated.

A Brooklyn jury in 1999 found that Ms. Ramos had helped her boyfriend grab the service weapon from Officer Mosomillo’s partner during a struggle in her East Flatbush basement apartment after the two officers had come to arrest her boyfriend, a parolee, for failing to appear in court on drug charges. The boyfriend, Jose Serrano, then shot and mortally wounded Officer Mosomillo, who also fired his weapon, killing the boyfriend.

She was convicted of manslaughter and assault. Because of earlier felony convictions, including for trying to smuggle heroin into the country, she was classified as a persistent offender and sentenced to 15 years to life.

She was released from Bedford Hills Correctional Facility on Dec. 10 following a state parole panel hearing in October, but was immediately taken into Federal custody. She pleaded guilty later that day to violating the terms of her supervised release, imposed for a series narcotics convictions.

‘A Prisoner in My Heart’

Margaret Mosomillo, together with the PBA, had blasted the state Department of Corrections and Community Supervision for not notifying her of the parole date, at which she and other members of the Officer’s family would have been able to argue why Ms. Ramos should remain behind bars. She did so before Judge Garaufis, recounting their lives together from the moment she and her husband met until she was brought to Kings County Hospital the morning he was shot.

“He left behind a family that loved him and that he loved to no end,” she told Judge Garaufis. “It was a reckless decision by Betsy Ramos that took that life from me...Betsy Ramos does not deserve to walk out of this courtroom while I am still a prisoner in my heart.”

Following the sentencing, Mrs. Mosomillo was escorted out of the courthouse by a cortege of other line-of-duty families and PBA members.

Mr. Lynch thanked the Judge and the U.S. Attorneys who prosecuted the case, saying they did what the parole panel “didn't have the courage to do.”

“Our only regret is that he can only sentence to two more years,” he said of the Judge. He cautioned Federal Marshals and court officers: “Be careful. We're sending you a cop killer, one who has crocodile tears in her eyes, but no sorrow in her heart.”