November 12, 2020
Lynch Calls for Moderate Democrats to Say No


In an op-ed in the Empire Report, Pat Lynch calls for moderate Democrats to stand up, say no, and vote no to bad public safety policies and their deafening silence while police officers were being attacked and demonized.


In an op-ed in the NY Post, Pat Lynch defends PBA members against baseless attacks that they can't be trusted to protect voter's rights impartially.


In a two-page opinion piece in today's edition of the NY Daily News, Pat Lynch has a message for labor: Police officers' rights are workers' rights, and the attack on police unions is an attack on every union.


In Empire Report, Pat Lynch writes an op-ed calling out New York's elected officials for "not giving a rat's ass" for cops.


In an op-ed column in the Daily News, Pat Lynch calls for a “seismic change” in New York’s political culture after the city failed once again to plan to protect police officers during a crisis.


The Daily News published an op-ed column by Pat Lynch saying now is the time for politicians to stand with New York City cops.


In an op-ed column for Fox News, Pat Lynch addresses the dangers facing New York City police officers, noting that time is running out for our elected officials to reverse course and end their anti-police rhetoric.


PBA president Pat Lynch writes in the Daily News about on the job suicides and steps that can help to reduce them.

May 5, 2019
Lynch Responds to Commissioner


In a letter in the NY Post, Pat Lynch responds to Police Commissioner O’Neill’s op-ed column on Civil Rights Law Section 50-a by noting that attempting to appease anti-police activists will only expose cops to more harassment and threats.


In a Daily News op-ed, Pat Lynch calls for New York City police officers to be exempted from the proposed congestion pricing tolls in Lower Manhattan.


Pat Lynch’s letter explaining that the VSF is a negotiated benefit bought and paid for by police officers that benefited the City to the tune of billions of dollars appeared in the Staten Island Advance.


Pat Lynch’s op-ed in today’s Daily News sets the record straight on the NYS Civil Rights Law Section 50-A, the personnel records law that protects cops, firefighters and other public safety employees from being placed into the public domain.


In an op-ed piece for City Limits magazine, Pat Lynch confronts the reality of opposing visions of policing.


Pat Lynch’s Letter to the Editor informed the Daily News that their editorial about the PBA’s issues with the release of body cam footage was wrong.


Pat Lynch sends a letter to the New York Times on how the Parole Board rules have exposed flaws in the system.


In an online op-ed for the Daily News, Pat Lynch points out that the Mayor's double-talk on "competitive wages" is just the latest in a series of actions showing that his support for working women and men does not extend to those who protect this city.


The Staten Island Advance published an op-ed column by Pat Lynch that says the support that police officers need from the Mayor is in actions…not just words.


The News reports the NYPD’s request to the CCRB to provide a tally of yes and no votes in cases where complaints against officers are substantiated. PBA president Pat Lynch writes the Daily News in support of releasing that information noting that, unlike grand juries, board members are permanent fixtures who rule on many cases and whose biases can have a devastating impact on a police officer’s career. Chris Dunn of the NYCLU argues it leaves members vulnerable to retaliation by the department.


In an op-ed column in the NY Post, Pat Lynch says that criminals like the one who murdered P.O. Randolph Holder once again feel emboldened to carry and use guns, and that police officers need sustained, meaningful support from City Hall — not just words of praise when a tragedy occurs — in order to restore order on the streets.


The NY Post ran a letter to the editor from Pat Lynch objecting to their Tier 3 editorial called “Paying Off Police” and calling for the equalization of benefits for all police officers. 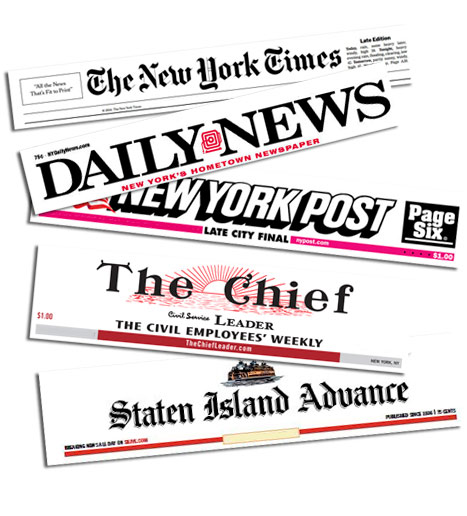