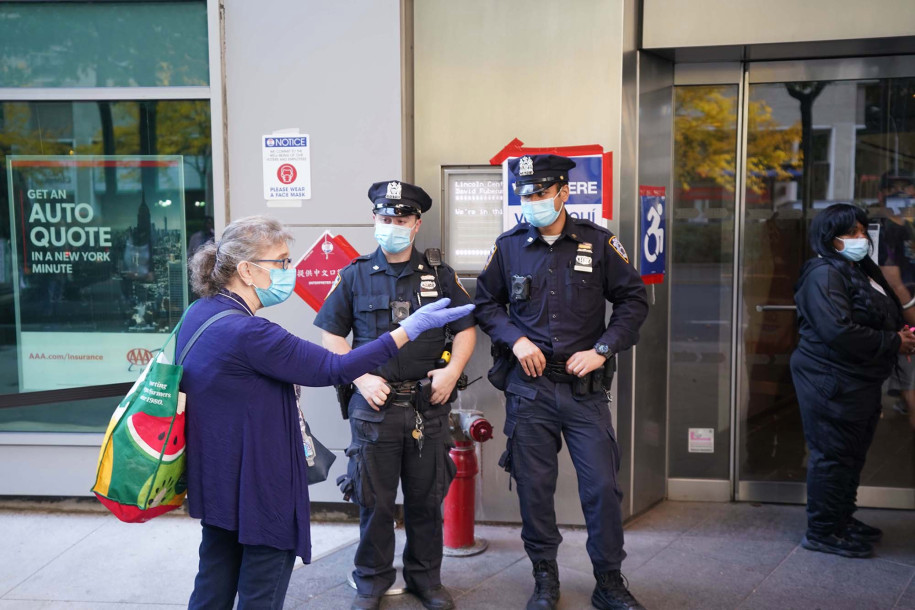 There’s been no shortage of baseless accusations and bizarre conspiracy theories hurled at New York City police officers these past few months, but last week’s installment reached a new level of absurdity.

The latest lunacy — coming without a shred of evidence to back it up — is that police officers cannot be trusted to perform our duties impartially this election season because we’re supporting President Trump.

Please. The idea of police officers trying to skew election results to our preferred candidate — or refusing to take our posts if he loses — would be laughable if it wasn’t so insulting.

Have any of the people floating this theory even visited a New York City poll site? Have they ever seen the police officers posted there exhibiting anything but the utmost professionalism, ensuring that every New Yorker can cast a ballot in peace and safety?

They haven’t. And they won’t.

Police officers performing poll duty is nothing new. Neither is the idea of police unions — or any other union — endorsing political candidates. Both things happen every single year. In past years, the PBA’s endorsements have included many Democrats, and questions about police officers’ impartiality on Election Day never, ever came up.

But we’re talking about them now because Mayor de Blasio and the NYPD gave foolish answers to loaded questions at two separate press conferences last week, falling over themselves to give reassurances that cops will “leave their politics at home.”

Of course we will — so why not simply reject the premise of the question altogether, as the mayor loves to do? Maybe because it takes the spotlight away from their own failed, politically motivated decisions.

It wasn’t the cops who decided to turn the Police Department into a political football — one that keeps getting kicked further and further from the realities of crime and disorder on our streets.

City Hall and 1 Police Plaza did those things. But rather than answering tough questions about their own failures, the mayor is dabbling in make-believe, “fighting back” against the unhinged fantasy of police officers interfering with an election, so that he can pat himself on the back when that doesn’t happen.

So this year, we will once again report to your local schools, rec centers and senior centers at 4 o’clock in the morning.

We’ll spend a long day standing our posts as the voters file through. It’s not an exciting assignment, but it’s important to us.

Why? Because when our tour finally ends, we’ll change out of our uniforms and head to our own polling places to vote for the candidates of our choice. Just like you did.

The rights we protect for you are our rights, too. We will defend them faithfully.