Reject the rhetoric that demonizes police 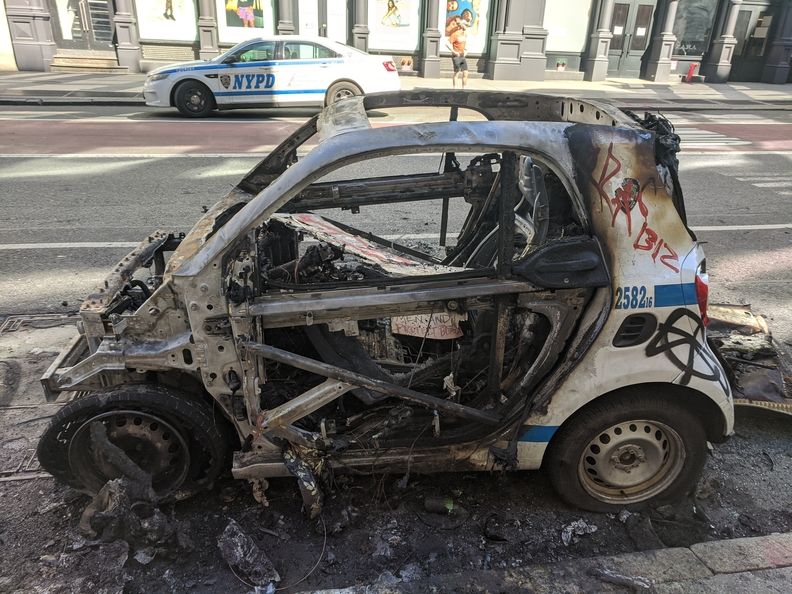 Police and protesters clashed throughout the New York protests over the death of George Floyd, a Minneapolis man killed in police custody. Photo: Janon Fisher

Broken glass and merchandise in the streets. Burning trash barrels on every corner. Block after block of plywood-covered storefronts.

The sobering scene last week in SoHo and Herald Square and Fordham Road marked the return of an old enemy, especially for the police officers who patrolled the same streets in the 1970s, ’80s and ’90s. During the city’s decay years, our biggest foe was not just crime and disorder but the fear of crime and disorder.

That fear is back.

Owners of businesses large and small have been demanding answers from our city leadership: How did this happen? In the city with the nation’s largest and most sophisticated police department, why did we experience three consecutive nights of violent unrest and unchecked looting?

From the perspective of the cops on the street, here is what happened: Our elected leaders and NYPD management sent us out without a clear plan, adequate resources or a strong message of support.

We were told to use a “light touch” in policing peaceful demonstrations—something we already do successfully, thousands of times each year. But when the bottles, bricks and Molotov cocktails started flying, there was no clear strategy to address the violence.

And when the sun came up, leaders in City Hall and Albany demonized police officers as if we were the problem, as if we broke the windows and caused the violence.

It was the same pattern we saw earlier this year, when New York state’s disastrous bail-reform law sent crime soaring. Many elected leaders responded by first pointing the finger at law enforcement, accusing us of fearmongering or manipulating statistics. Only after an overwhelming outcry from a worried public did the elected officials even attempt to fix the law itself.

There is a fundamental disconnect between many of the calls for “fairness” in policing and the criminal justice system, and the basic public safety our city needs to survive. They are not mutually exclusive, but too many of our lawmakers are treating them as if they are.

Unfortunately, that disconnect is getting worse. In a knee-jerk reaction to the mob in the street, state legislators have passed a raft of bills that will have a chilling effect on law enforcement. And city elected officials are being led down an even more extreme path, under the vague “Defund the police” slogan.

Common sense and democratic values have been in short supply. Law enforcement professionals are being barred from a seat at the table. So are leaders in business and finance, who are the engine of the New York economy. So are the small-business owners, who have been battered by the pandemic shutdown and now are pouring more money into protecting their businesses from property damage and looting.

In the absence of a rational conversation, fear takes hold. It will take all of us, working together, to change that.

New York police officers brought our city back from the brink decades ago, but we didn’t do it alone. The renaissance was possible only because we had the backing of our elected leadership, support from the business community and support from regular New Yorkers in every neighborhood.

We can do it again, but only if we have your support.