Final Decision Is the Commissioner’s 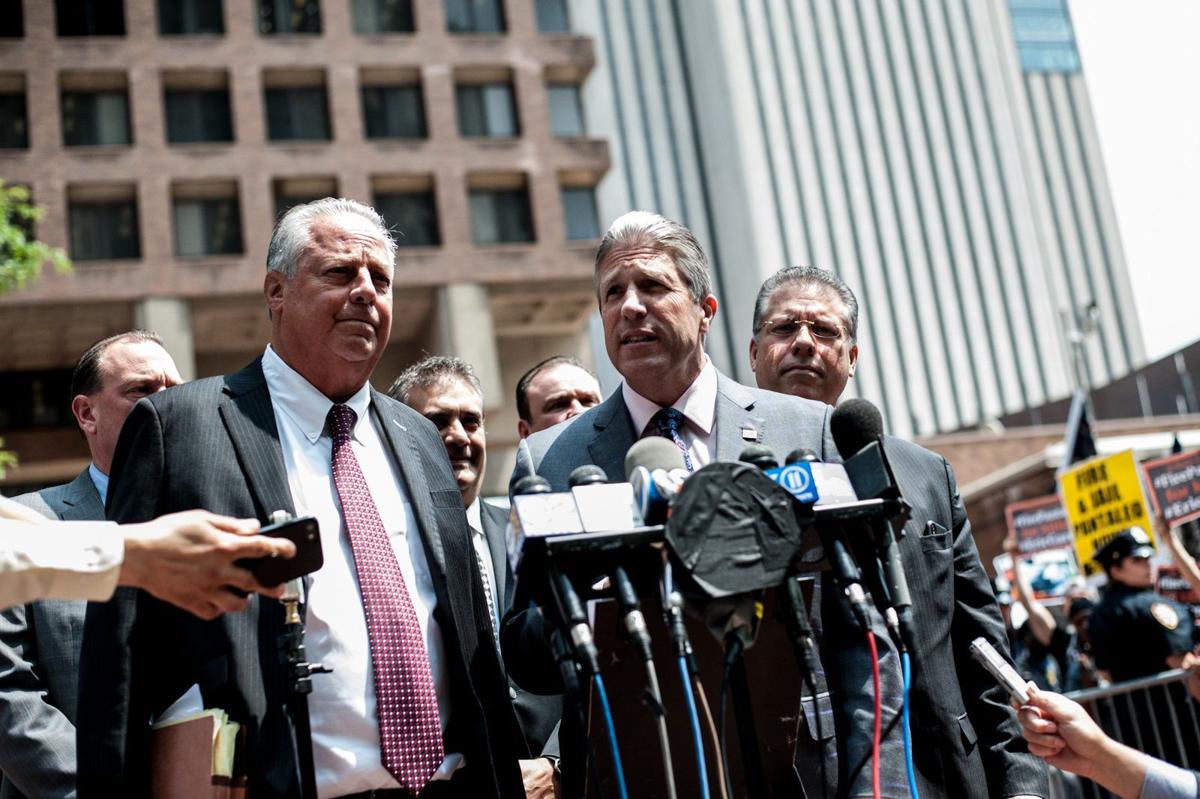 REBUKE: The president of the Police Benevolent Association, Patrick J. Lynch, on Friday excoriated an NYPD Judge’s conclusion that Police Officer Daniel Pantaleo was reckless during his attempted arrest of Eric Garner, the Staten Island man who died five years ago following a confrontation with police. Officer Pantaleo's attorney, Stuart London, left, and Mr. Lynch, pictured following a session of Mr. Pantaleo’s administrative trial in May, blamed politics for the decision. The Chief-Leader/Rebecca White

That is the conclusion reached by NYPD Deputy Commissioner of Trials Rosemarie Maldonado, who found that the officer was reckless during a confrontation with Eric Garner, the Staten Island man he and another officer tried to arrest in that borough’s Tomkinsville neighborhood five years ago and which ultimately led to Mr. Garner’s death.

Judge Maldonado, who presided over the Officer’s disciplinary trial on administrative charges in May, forwarded her 45-page decision to Police Commissioner James P. O’Neill, who will have the final say over whether Mr. Pantaleo stays a cop. He was suspended shortly after the decision was announced.

The Police Benevolent Association’s president, Patrick J. Lynch, and Mr. Pantaleo’s attorney, Stuart London, on Friday excoriated the Judge’s decision and her rationale. Mr. Lynch blamed Mayor de Blasio and those he called “criminal advocates” for creating a political climate that obliged Ms. Maldonado to fabricate justifications for why Mr. Pantaleo should be fired. The Mayor, he said, “predetermined the outcome” when he said of the Garner family during the Democratic presidential candidate’s debate on July 31 that “they’re going to get justice.”

“It's a horrible decision that came out today by someone that doesn't understand the law, but unfortunately understands politics,” Mr. Lynch said of Judge Maldonado during a Friday afternoon press conference at the PBA’s offices.

During his regular Friday morning Q&A with Brian Lehrer on WNYC, Mayor de Blasio said he did not yet know the Judge’s decision.

He suggested the decision could have debilitating effects for NYPD officers and their ability to fight crime.

“I stand here today to tell every New York City police officer—and they're on patrol right now—when someone calls 911 and dispatchers call you and there's a circumstance where you have to put your hands on someone, call your Sergeant first, call Emergency Services second, because you will not have the backing of the city,” he said. “You will not have the backing of the department...So our police officers unfortunately are in a position of having to protect themselves, rather than spending the time protecting you.”

He said that if the Commissioner does fire Mr. Pantaleo, the officer could petition the state’s Appellate Division to have an appeal heard.

The Mayor welcomed the decision, but lamented how long it took to reach it. He reiterated, as he has for the last few weeks, that city officials deferred to Federal authorities and did not act earlier.

“Today, we finally saw a step toward justice and accountability. We saw a process that was actually fair and impartial,” he said shortly after the decision was announced. “And I hope that this will now bring the Garner family a sense of closure and the beginning of some peace.”

Some, however, have criticized the Mayor, saying he waited too long to either act on his own or pressure the Commissioner to fire Mr. Pantaleo or to order an NYPD trial.

On July 16, a day before the statute of limitations would have expired on at least one charge, the U.S. Attorney for the Eastern District, Richard P. Donoghue, announced that Officer Pantaleo would not face Federal charges in connection with Mr. Garner's death, effectively shuttering a criminal prosecution of Mr. Pantaleo, who had been on desk duty since the incident. At the time, Mr. Lynch said the Department of Justice’s decision to not prosecute echoed that of a Staten Island grand jury convened shortly after Mr. Garner’s death.

In a statement, Mr. Garner's mother, Gwen Carr, said that although she now had "some relief," she wants the other officers who were present during her son's arrest to also face disciplinary action.

"My family and I have been fighting for five long years for justice and accountability for Eric’s murder—and Mayor de Blasio and the NYPD have put up roadblocks and delays every step of the way," she said. "It brings me some relief to learn that Judge Maldonado has recommended that Pantaleo be fired—but the recommendation is long overdue, I’m still not allowed to see Maldonado’s report and we still have a ways to go before there is true accountability for Eric’s murder."

Fred Davie, the chairman of Civilian Complaint Review Board, whose lawyers prosecuted Mr. Pantaleo, said Judge Maldonado’s decision affirmed what the CCRB had asserted: “Officer Daniel Pantaleo committed misconduct on July 17, 2014, and his actions caused the death of Eric Garner,” he said in a statement. “The evidence the CCRB’s prosecutors brought forth at trial was more than sufficient to prove that Pantaleo is unfit to serve.”

He called on Commissioner O’Neill to uphold the Judge’s decision and dismiss Mr. Pantaleo.

Just after noon on Friday, Phillip Walzak, the NYPD’s chief spokesman, said Mr. O’Neill had not yet been given Ms. Maldonado’s report. He said the Commissioner would make a final determination by the end of the month.

The issue played an unexpected role in the Democratic presidential debate two nights earlier even before the Mayor made his remark about “justice” for Mr. Garner’s family.

Protesters led by Kirsten John Foy, who held a top position under Mr. de Blasio when he was Public Advocate from 2010 to 2013, chanted “Fire Pantaleo!” while the Mayor became the first of the 10 candidates onstage to deliver opening remarks. They resumed the chant while New Jersey U.S. Sen. Cory Booker gave his introductory statement, at which point Mr. Foy was among those escorted out by security officers at Detroit’s Fox Theater.

Another candidate, Julian Castro, who served as U.S. Housing Secretary during the Obama Administration, said, “Officer Pantaleo used a chokehold that was prohibited by the NYPD. He did that for seven seconds. Eleven different times Eric Garner said he couldn’t breathe.”

Mr. Castro contended that Officer Pantaleo “knew what he was doing and yet he has not been brought to justice. That police officer should be off the street.”

U.S. Sen. Kirsten Gillibrand added, “He should be fired now. If I was the Mayor, I’d fire him.”

The Chief-Leader's Richard Steier contributed to this report.