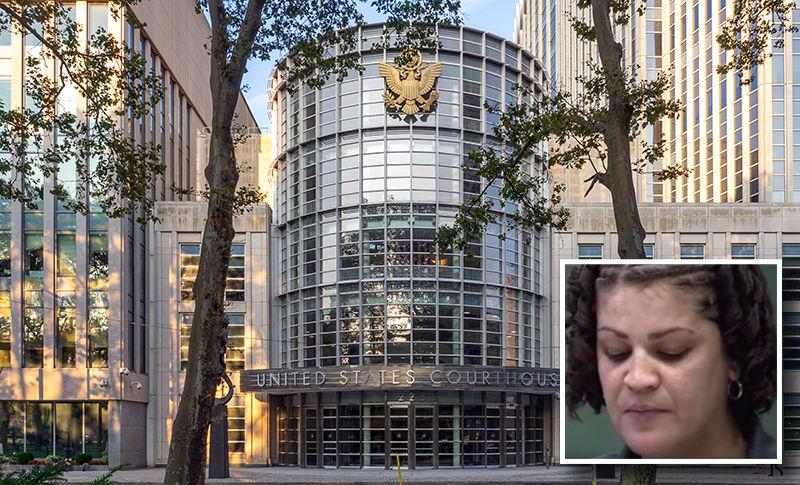 STAYS IN CUSTODY: Betsy Ramos, inset, paroled from state jail on Dec. 10 after serving 20 years for manslaughter in connection with the killing of an NYPD Police Officer, will be sentenced in U.S. District Court in Brooklyn later this month for violating terms of an earlier parole because of her role in the officer’s death. Courtesy of Ajay Suresh and, inset, The Decarceration Collective

A Brooklyn woman convicted in 1999 for her role in the killing of an NYPD Police Officer was released from a state jail Dec. 10 but swiftly taken into Federal custody.

Betsy Ramos, sprung from Bedford Hills Correctional Facility, was escorted to Brooklyn Federal court where she pleaded guilty to violating conditions of an earlier parole when she was convicted of manslaughter in connection with the May 1998 killing of Officer Anthony Mosomillo. She was once again behind bars soon afterward and will remain there until at least Dec. 20.

U.S. District Judge Nicholas G. Garaufis set the sentencing date for later this month to give the officer’s family the opportunity to argue that she should remain imprisoned, a chance they said they were denied at the October parole-board hearing that freed Ms. Ramos, 55, from state custody.

Judge Garaufis instructed the prosecuting U.S. Attorney to contact Officer Mosomillo’s family members to see if they want to address the court prior Ms. Ramos’s sentencing.

“We are grateful to Judge Garaufis for letting the family of our hero police officer be heard,” he said in a statement.

“Because of the New York State Parole Board’s outrageous deception, the Mosomillo family has been forced to live in fear of seeing Anthony’s killer walk out of prison doors. Their sacrifice matters. Their suffering matters. Their voices need to be heard.”

A Brooklyn jury found that Ms. Ramos helped her boyfriend grab the service weapon from Officer Mosomillo’s partner during a struggle in her East Flatbush basement apartment after the two officers had come to arrest her boyfriend, a parolee, for failing to appear in court on drug charges.

The boyfriend, Jose Serrano, then shot and mortally wounded Officer Mosomillo, who also fired his weapon, killing the boyfriend.

The jury acquitted Ms. Ramos of second-degree murder but convicted her on charges of manslaughter, assault and obstruction of governmental administration, all in the second degree.

Although the manslaughter charge carried a maximum sentence of 15 years, her previous record, which included Federal felony convictions on drug charges, meant she was classified as a persistent offender and she was sentenced to 15 years to life, with her sentences on the two other counts to be served concurrently.

The officer’s widow, Margaret Mosomillo, together with the PBA, blasted the state Department of Corrections and Community Supervision for not notifying her of the October parole date, at which she and other members of the Officer’s family would have been able to tell the parole panel why Ms. Ramos should remain behind bars.

DOCCS, though, insisted it had sent letters to the family letting them know of the parole date, which was the second for Ms. Ramos this year. She had successfully appealed a decision by a parole panel that decided she was unfit for release following an interview in January.

DOCCS representatives also said victim impact statements from Officer Mosomillo’s family “were made available to the panel conducting the [October] interview, as is standard practice.”

Mrs. Mosomillo and the PBA accused the DOCCS of deception.

“Ramos was given a chance to start fresh and make her case before a new parole panel. Why was the Mosomillo family deprived of the opportunity to do the same?” the PBA said in a statement following the panel’s decision to release Ms. Ramos.

Ms. Ramos, 55, was therefore first eligible for parole in 2013. She had appeared before the Parole Board three times prior to her January hearing.