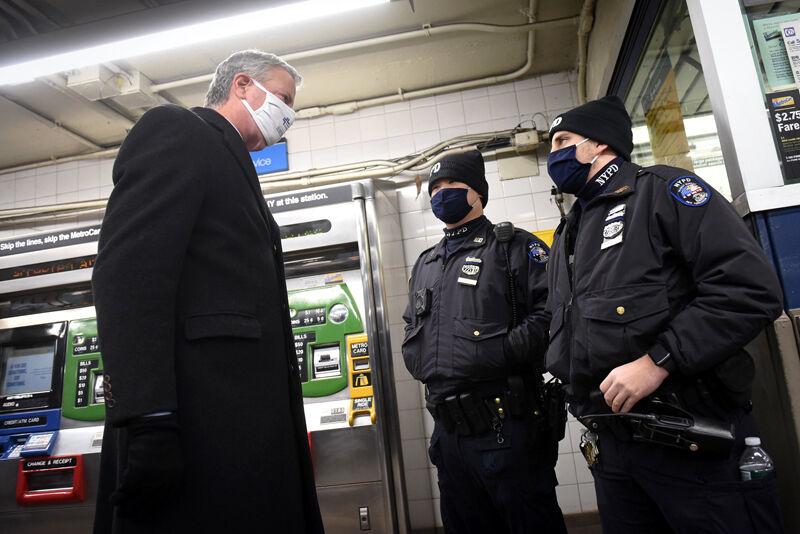 GAUGING RESISTANCE?: The disciplinary records of police officers and other uniformed personnel are subject to public disclosure, a Federal Appeals Court has ruled. Mayor de Blasio, who initially was reluctant to back repeal of a law that kept the records under wraps, praised the Feb. 16 ruling, saying it would ‘restore accountability.’ Above, Mr. de Blasio speaking with NYPD officers Feb. 15, after the deployment of 500 additional cops into the subway system.
Photo courtesy of Michael Appleton/Mayoral Photography Office

In a significant setback for police and other law-enforcement unions, a Federal Appeals Court has ruled that even unsubstantiated complaints made against their members are subject to public disclosure.

In affirming a District Court opinion issued in August, a Second Circuit Court of Appeals panel Feb. 16 turned back arguments from a coalition of law-enforcement and other unions that argued that the release of the records, including those containing allegations of misconduct found to be “unsubstantiated, unfounded, or non-final,” would violate collective-bargaining agreements and compromise the safety of officers and their families.

Subject to further appeals, the ruling by the three-Judge panel clears the way for the publication of a trove of disciplinary records even larger than the June release of more than 300,000 Civilian Complaint Review Board findings regarding NYPD officers dating back to the 1980s.

The case grew out of the State Legislature’s June repeal of that section of state Civil Rights Law, known as 50-a, that city and state officials for years cited to deny access to uniformed officers’ disciplinary records.

In upholding a Manhattan Federal District Judge’s ruling, the Second Circuit panel found that the unions’ collective-bargaining agreements did not prevent the officers’ respective departments or the city from releasing the records.

The unions had argued that those records that were removed from personnel files after NYPD officers were exonerated or following findings that alleged misconduct was unfounded should not be subject to disclosure.

The Circuit Court, though, agreed with District Judge Katherine Polk Failla’s finding that, as in the case of the NYPD, “[r]emoval of such records from a personnel file, as called for by the CBAs, does not require eliminating them from all of the City’s records." And since they are subject to the public-disclosure laws, “the NYPD cannot bargain away its disclosure obligations,” the Judges wrote.

“The unfettered release of police personnel records will allow unstable people to target police officers and our families for harassment or worse,” Mr. Lynch said following Legislators’ votes in June. “A dangerous cop-hater only needs a police officer's name, linked to a few false or frivolous complaints, to be inspired to commit violence.”

But the courts were not convinced, with Judge Failla saying that law-enforcement unions had produced “speculation only” that the release of the records would heighten possibility of harm to officers. The unions also had not provided “a single example” of a public disciplinary record that had been linked to any risk of harm against officers.

The Circuit Court panel echoed Judge Failla’s finding, noting, as she and advocates of the law’s repeal have, “that many other States make similar misconduct records at least partially available to the public without any evidence of a resulting increase of danger to police officers.”

A spokesman for the law-enforcement coalition hinted that the unions would appeal the Second Circuit’s decision.

'Will Continue to Fight'

“Today’s ruling does not end our fight to protect members’ safety and due process rights,” the spokesman, Hank Sheinkopf, said in a statement following the court’s ruling. “The FOIL law provides exemptions that allow public employers to protect employees’ safety and privacy. We will continue to fight to ensure that New York City applies those exemptions to our members fairly and consistently, as they do for other public employees. Politics must not be allowed to relegate firefighters, police officers and corrections officers to second-class status.”

A further appeal, if pursued, would be to the U.S. Supreme Court.

The Circuit Court Judges also dismissed, as Judge Failla did, the unions’ assertion that future employers would be disinclined to hire officers who had even “unfounded or unsubstantiated” allegations made against them. Those employers, the Judges wrote, “were unlikely to be misled by conduct records that  contained ‘dispositional designations’ specifying that allegations of misconduct were unsubstantiated, unfounded, or that the accused officer was exonerated.”

The NYPD deferred comment to the city Law Department, which in a statement said that “[t]he rule of law prevailed today.

“The city’s planned release of these records was consistent with the law and the enhanced transparency the legislature intended. We are gratified by this court ruling,” it added.

Mayor de Blasio, who was criticized by repeal advocates for his initial reluctance to engage in the debate over the law, said the Second Circuit’s decision will help “restore accountability and trust to the disciplinary process.”

“We look forward to releasing this data and will seek clarity from the court regarding when these records can be released,” he said.

Reform-minded lawmakers along with advocates, activists and civil-rights organizations had for years called for repeal of 50-a, arguing that shielding disciplinary records from the public generated a culture of impunity, particularly within the NYPD.

“Today’s decision from the Second Circuit affirms that the public has the right to know when police brutalize or sexually harass New Yorkers and escape discipline, in spite of police unions’ baseless claims and fear-mongering,” said Joo-Hyun Kang, the director of Communities United for Police Reform, which participated in the case.

The Rev. Fred Davie, the Chairman of the Civilian Complaint Review Board, which is essentially the repository of the complaints, said the law's repeal would increase transparency and bolster the police disciplinary process.

“State lawmakers, the CCRB, and others recognize the public’s right to know and scrutinize how their communities are being policed," he said in a statement. "Today’s ruling supports that right, affirms the repeal of 50-a, and solidifies the CCRB’s intent to provide the public with all relevant information it can, both through its own searchable database and pursuant to lawful FOIL requests."

“To live up to the values of transparency and accountability underlying that repeal, the City can and should immediately proceed with its plans to make police misconduct records accessible to the public, as promised by Mayor Bill de Blasio last summer,” she said in a statement.