Cops get the short end of de Blasio's stick, again 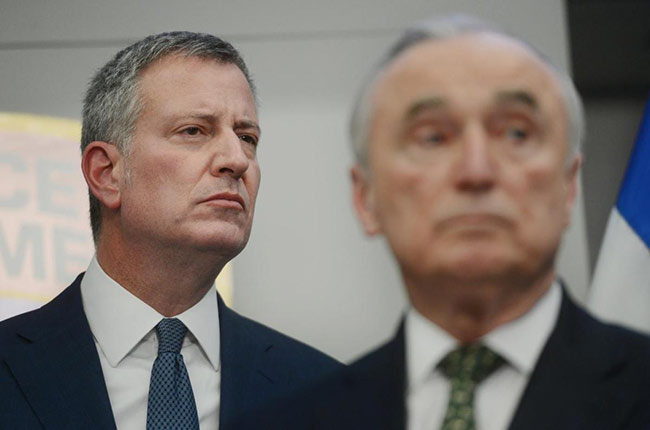 Last Thursday, it was reported that Mayor de Blasio gave out $2 million in raises to City Hall staffers. We don’t begrudge these city employees fair raises; as we have always said, those who serve this city should be able to afford to live and support their families here, too.

The problem is that the mayor is once again talking out of both sides of his mouth. When news of these raises broke, his own spokesperson said they were necessary because for the City of New York to “retain skilled staff, we need to offer competitive wages.”

We couldn’t have said it better ourselves. But when it comes to New York City police officers, the mayor has said and done the exact opposite.

At a time when PBA members are already paid 30% less than police officers in comparable communities, they have fallen further behind as a result of the recent 1% raises during a period in which inflation in our area exceeded 4%. Now, the mayor wants to impose another six months of no wage increases, followed by more below-inflation 1% raises. In other words, another real pay cut.

That is why the PBA was forced to file a Declaration of Impasse with the state. For all their talk that “the door is always open,” the mayor and his team have so far displayed zero interest in having a meaningful discussion.

Although the PBA has reached contract impasses with all three previous mayors, we believe that there is a fundamental difference under the de Blasio administration. Despite his seeming praise for police officers’ hard work and heroism, his actions or inaction on issues beyond pay have displayed only contempt. In the past two months alone, the de Blasio administration has:

- blocked, for the second year in a row, the PBA’s efforts to obtain a fair disability benefit for police officers hurt in the line of duty;

- imposed, once again without bargaining with the PBA, a sweeping and ill-considered new use-of-force policy that will lead to hesitation, confusion and inaction among police officers, jeopardizing their ability to protect the public and each other;

- refused to discuss our often-repeated demand for ballistic vests, helmets, long guns and the necessary training to effectively counter the active shooter threat.

It was only after they received bad press following the shootings of officers in Dallas and Baton Rouge — as well as a PBA-initiated state investigation — that the NYPD announced a half-measure that still does not adequately address the latest threats.

Simply put, these recent examples demonstrate that the mayor’s support for working women and men does not extend to those who protect this city. And now, he is doling out raises to his inner circle, while claiming there is no money to close the troubling gap that would bring our members’ salaries to a competitive level, even though the city’s budget situation is the best it has been in decades.

If Mayor de Blasio truly believes that competitive wages are necessary for New York City to retain the best and the brightest, he should pay attention to the fact that nearly 90% of officers say they would leave for a better-paying police job if they had the chance. He should work on closing the competitive pay gap for New York City police officers and supporting them as they patrol our streets every day. Otherwise, he’s nothing more than a hypocrite.