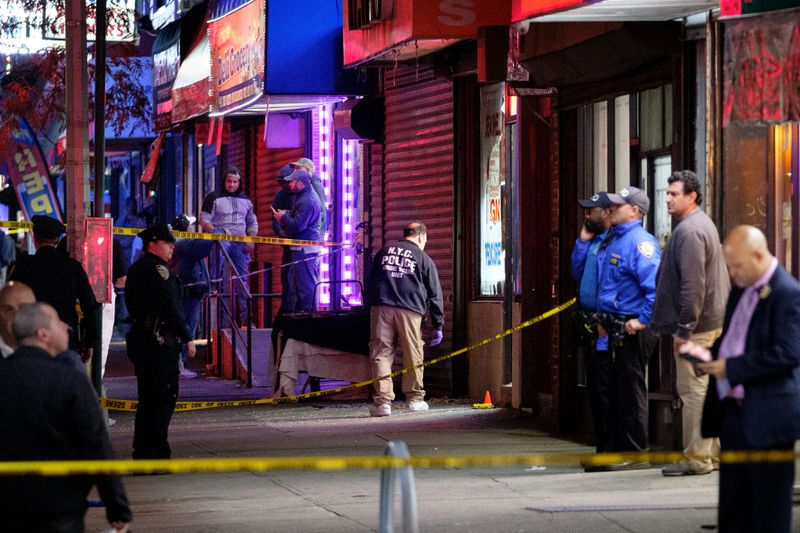 A mentally ill man was dead and a police officer was in a medically-induced coma after a wild melee Friday in Brooklyn sparked by cops’ effort to arrest a man urinating in a nail salon, said police sources and the dead man’s family.

The mayhem erupted around 5:40 p.m. at the Goldmine Nail Salon on Mother Gaston Blvd. between Belmont and Sutter avenues in Brownsville when a man walked in and asked to use the bathroom. Then, he urinated in the middle of the salon, said police.

Store workers went outside and hailed two officers from the 73rd Precinct in a marked van.

When the cops confronted the urinating man, they found he had an active warrant for criminal mischief and placed him under arrest, said NYPD Chief of Patrol Rodney Harrison. 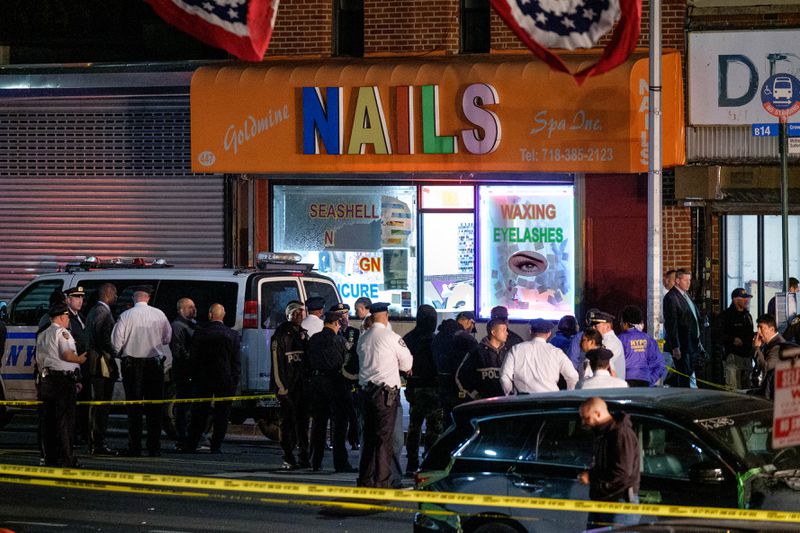 Kwesi Ashun, 33, who saw the incident from outside the salon, objected.

Ashun — who was selling T-shirts from a stand on the street, and had just offered some of his wares to state Assemblywoman Latrice Walker — went into the salon and confronted the officers.

Ashun “engaged in a violent struggle with the uniformed officers. One of the officers deployed a Taser but it was ineffective in stopping the threat,” said Chief Harrison.

“The male [Ashun] continued his violent struggle with the officers by raising up a metal chair and striking one of the officers in the head,” said Harrison. The officer struck in the head fired at Ashun six times, Harrison said.

Walker, a Brooklyn Democrat whose district includes the shooting scene, was with her 7-year-old daughter in a nearby Dunkin’ Donuts during the shooting. “We heard two shots, then we heard another three shots that followed,” the assemblywoman said.

“Children were running. My daughter was screaming,” Walker said. “If there was a fight taking place, this could’ve been handled differently. I feared for my safety and the safety of my child.”Ashun — who relatives said suffered from bipolar disorder — was dead at the scene, said Harrison.

But the mental health professionals “said there was nothing they could do,” she recounted in disbelief. “They said he wasn’t a danger to himself or others.

“I told them he was in crisis mode. They said, ‘Call 911.’ I told them I wasn’t comfortable with dialing 911 on an ill black man. It was too dangerous. So I didn’t call.”

“The whole thing points to a crisis in our mental health system," Bartley said.

Ama Bartley, Ashun’s sister, said she and other relatives had sought help for him. A mental crisis team from Kings County Hospital saw Ashun on Oct. 14. Bartley said.

“My brother was having a mental episode,” Bartley said, fighting tears. “He was very angry. He was spiraling [out of control]."

The hospitalized officer’s partner, a cop for seven months, was taken to Kings County Hospital to be checked for tinnitus, said police sources..

“A young man is now dead because of an interaction with the police,” said Walker.

The man who the officers wanted to arrest fled the scene with handcuffs dangling from one wrist, said a police source. He was quickly apprehended by other cops, said multiple police sources.

The injured police officer — whose name has not been released — is a 21-year NYPD veteran. He was taken to Brookdale Hospital, where Harrison said doctors put him in a medically induced coma. He is listed in critical but stable condition.